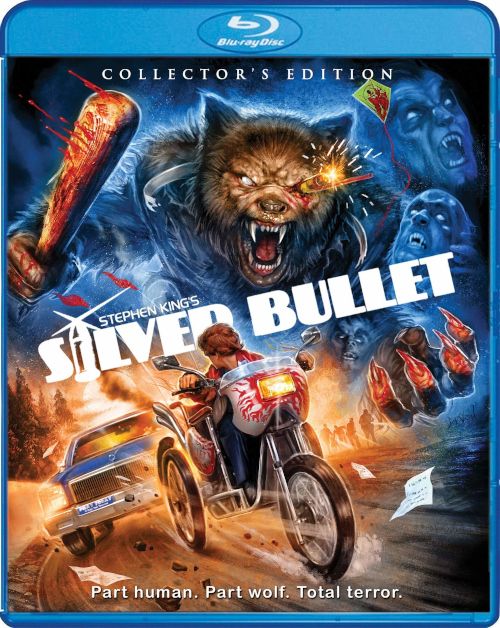 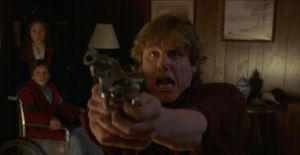 Movie
When I think of the top 3 werewolf movies of all time (in my opinion of course), the three that immediately come to mind are American Werewolf in London, The Howling and Silver Bullet. I like to contrast The Howling and Silver Bullet as being totally on the opposite end of the horror spectrum in regards to it’s delivery. On one end of the spectrum we have the adult horror film that is The Howling, complete with gruesome deaths and gritty terror. Then we have Silver Bullet, which is aimed more at the teen audience, and even though it has some gory monster scenes, is more content to have fun with Corey Haim and Gary Busey than it is trying to make a SERIOUSLY terrifying movie.

Penned by Stephen King in Novelette form (“Cycle of the Werewolf”), Silver Bullet is a cheeky and airy little film that starts out as a typical 80s horror movie, but then changes into a mystery film as the identity of the werewolf comes into play. It also is probably not a coincidence that Gary Busey adds in a healthy dollop of humor to the film and makes it much more of a teen action/comedy movie than a traditional terrifying horror movie. Stephen King also writes the screenplay for the film as well, and you can see his humorous touches to the film and desire to develop the various characters quite a bit more than your average horror film. 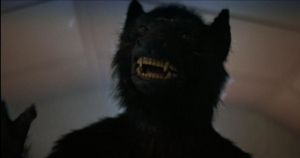 The story revolves around a small town in rural America where a rash of killings are happening. At first it seems like various accidents, but as the killings get more and more gruesome sheriff Joe Haller (Terry O’Quinn) starts to realize that something ELSE is out there doing the killing besides a human. The main character of the film happens to be a young wheelchair bound boy named Marty (Corey Haim) and him figuring out just what exactly is going on. With the help of his idiosyncratic uncle Red (Gary Busey) he gets around town with a souped up wheelchair nicknamed the Silver Bullet, and stumbles on to a bit more information about the identity of the furry killer than he really should. Now Marty has to convince his sister Jane (Megan Follows, the same year she become immortalized in Anne of Green Gables) and his uncle red that the killer is something inhuman, and some ONE that they know at that, and that it’s coming for them next.

Silver Bullet dances a thin line between horror and a teenage mystery. It doesn’t rely on cheap scares and thrills, but rather is more introspective and nuanced, with script writer Stephen King trying to pull out some dramatic elements out of his characters. Especially in regards to the two siblings Jane and Marty. Gary Busey is obviously the humor aspect of the film, and he does it quite well as he hams it up in typical Gary Busey fashion (before Busey went crazy from his infamous motorcycle accident and way too much drugs), but it’s really Corey Haim and Megan Follows that gets the most focus. Marty is a charming and precocious youth, but he’s also sensitive and kind as well. He knows when he pushes the line a bit too far with his sister Jane, and is properly empathetic when she gets embarrassed. Jane is also just as kind as Marty, and although she sometimes hates having to deal with a little brother, he’s her ward and she does her best to protect him nonetheless.

Looking at it (and judging by Scream Factory’s lack of announcing a new master or scan) this is the identical source master that was used to create the Umbrella release last year. That’s mostly good, but also a bit disappointing as I was really hoping for a 4K scan for this collector’s edition. The film is clean and clear of debris, and is generally sharp and crisp all around with goodly amounts of detail abounding. There’s some softness and smoothness to the image though, and it looks a bit processed at times. Colors are warm and earth toned, with just a hint of paleness to skin tones. It’s an all around good transfer, but not an exemplary one.

The 2.0 Mono track in lossless DTS-HD MA is comfortably appealing, and has a solid amount of crispness to it for a mono track from the 80s. Dialog is clean and clear in the mains, and the rumbling and roaring of the beast comes through impressively as well. There’s not a whole lot of depth to it considering that it’s a simple mono track, but I didn’t detect any hints of hiss or other analog abnormalities to it either. A simple track with a clean presentation at its core is all we can ask for, and that’s what we got.

Silver Bullet is a whole ton of fun, and even though it’s not one of the SCARIEST of werewolf movies, it’s one of the more memorable ones thanks to Stephen King’s influences in the writing. The film is light and airy while still being gory and reminiscing in the little nuances of King’s fantasy world (such as drunken bumbling middle aged men who get their butts handed to them time and time again) while still delivering some really good times. Scream Factory seems to be using the same transfer that the Umbrella release used over seas, and while it may not be perfect, is still very excellent by today’s standards. The extras crammed on the disc actually surpass the Umbrella release, although it IS missing the Martha De Laurentiis documentary from that release. All in all, a great collector’s edition and the best domestic release we have to date. Great watch in my opinion.