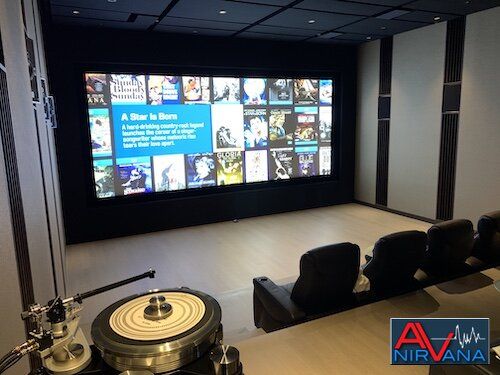 (October 10, 2020). Today, we’re taking a break from traditional news coverage and turning our attention to a fun promotional story released by Seymour-Screen Excellence. Nearly one year ago, Seymour-Screen unveiled its top-tier ART (Adjustable Ratio Theatrical Motorized Masking System). Unlike other masking systems offered by the company, ART is capable of masking screens as large as 20’ tall x 30’ wide (yes, HUGE).

As we previously reported, ART allows installers to build a screen on a wall, bucking traditional methods of assembly. The system, itself, taps a high-quality 8.8” frame that’s installed in sections and hidden by a sleek velvet fascia. Beneath that fascia lies ultra-quiet motor assemblies and Seymour’s sheer black AT masking panels.

That brings us to Seymour-Screen’s recent project in Texas, which found the company’s Enlightor Neo 4K HDR AT screen and ART masking system used to create a 22-foot wide cinemascope screen. Rather than dig through the details myself, I’ve decided to include Mutto Communication’s full press release about the project. As you’ll see, this home theater is loaded to the brim with high-performance gear from some of the industry’s most recognizable high-end names. It’s beyond drool-worthy material. Definitely check it out…

Ames, IA – October 8, 2020 - A longtime customer of Texas-based A/V Integration company Sound Lab Designs assigned principal Ernie Blumenthal with the task of creating a theater in a home that he was having built. One truly without compromise and to Dolby Atmos® Music performance specifications.

Blumenthal and his client flew to Los Angeles to experience several of Capitol’s rooms, with Studio C -- the Dolby Atmos Music certified room – immediately setting the benchmark for what he wanted his theater’s acoustical performance to be modeled after.

Accordingly, Blumenthal and team proceeded to build the theater like a professional recording studio. Two acoustic access doors and room-within-a-room construction completely isolate the theater from the house. As for the flooring, a 5-inch concrete slab sits atop acoustical isolation pads which in turn rest upon the 4-inch concrete floor of the main home. Walls are separated by a gap with acoustical treatments in between.

Keeler installed the interior to Veith’s specifications. Diffusers are positioned on the walls and acoustical treatments are suspended from the ceiling on wires which also create a nice visual element. “With its 27-ft wide by 35-ft deep footprint, 16-ft ceilings and tiered seating, the theater has an overall grand feeling. To keep it fresh-looking for years to come we opted for light-colored wood floors. This was not a concern given the amount of acoustical treatment placed throughout the walls and ceiling,” says Blumenthal. 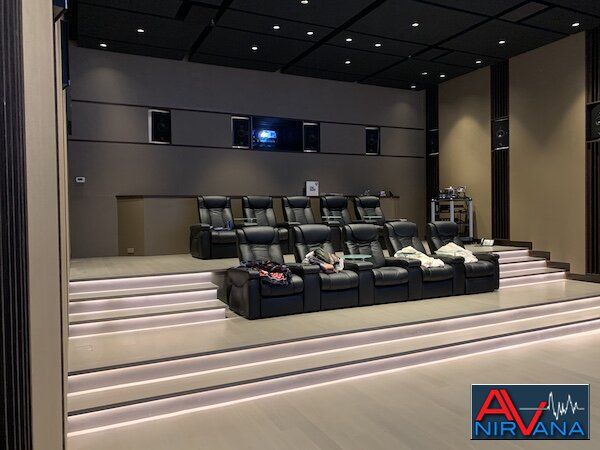 The theater’s air conditioning system was designed to be completely silent. A separate AC unit manages the equipment room, home to the amplifiers and projector. A custom made 50,000-watt isolation transformer with voltage regulation provides clean power to all the equipment. “After completion the room was tested and surpassed all design specifications. At 110dB full bandwidth pink noise there was an almost 80dB drop at all frequencies outside the room,” notes Blumenthal.

The audio portion of the theater consists of PMC’s flagship QB1-XBD fully active speakers as front mains, QB1 active speaker for center, twenty-two Wafer 2 surrounds in a Dolby Atmos configuration and two PMC XBD active rear subwoofers used as an acoustic bass array to help tighten-up the bass response in any position in the room. This is a similar but larger scale version of the PMC system used in Capitol’s Studio C. A StormAudio ISP 3D.32 ELITE manages the preamplification and immersive audio processing.

With such a critical focus on audio performance, required was a commercial-sized film screen that would not impede in the slightest performance of the PMC center channel and mains mounted behind it while still delivering reference video. Also required was the ability to adjust aspect ratio all the way down to 4:3 for this film noir buff homeowner.

Enlightor Neo and its predecessor Enlightor 4K are arguably the most highly reviewed acoustically transparent film screen surfaces in the CEDIA channel. Neo is a random knit, matte white, 1.0 gain material that does not require any equalization, therefore a top choice amongst discerning theater designers and engineers at film and post-production/mix facilities. It is commonly recommended by loudspeaker companies and acousticians to get specified into discerning jobs.

ART is the newest and largest of Seymour-Screen Excellence’s three masking screen platforms (ART, TAM, TRIM). Designed by Managing Director Chris Seymour, ART is unique in that it is a build-on-wall masking solution available in sizes from 160 - 350 inches wide (viewable image) and at its largest size reaches 20-ft high by 30-ft wide inclusive of masking. To accommodate the different video formats, ART is available with either 2-way (left/right or top/bottom) or 4-way independent masking panels and offers unlimited intermediate masking panel positions including down to 4:3 with 120-inches of masking on each side. ART was a star of the 2019 CEDIA Expo, declared a Best New Product winner.

ART is complemented in this installation by a 30,000 lumens Digital Projection 4K laser projector and anamorphic lens. A Lumagen video processor was used for scaling and aspect ratio control.
Last edited: Oct 26, 2020
Click to expand...