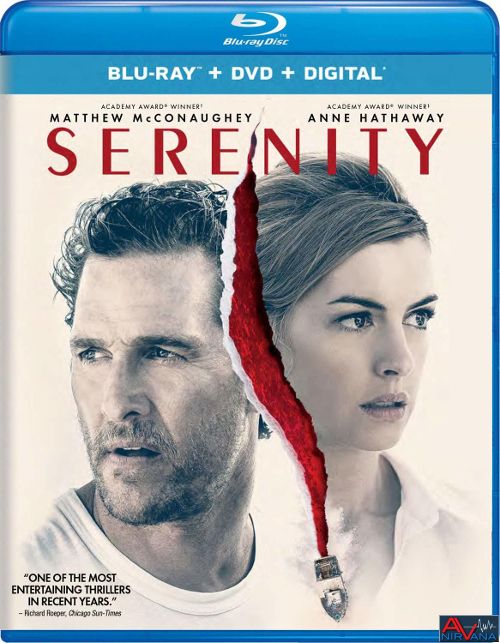 Movie
I really have to hand it to director/writer Steven Knight. I actually stood up and applauded at the end of Serenity, but not for the reason you’re thinking. I actually stood up and applauded because I have never had a film make me laugh this hard, look at the screen and mouth “what in bloody blue blazes?” and feel like I was in the middle of a drug induced stupor at the same time. Serenity initially got me hooked from the trailers a few months back, and I was fully on board considering that Matthew McConaughey has been on a kick the last decade for making incredibly interesting character dramas, and I love Jason Clarke (even though him as John Conner is something I really want to forget). However, I was truly not expecting this convoluted, artistic, sci-fi laden mess of a film when I went in. I had to actually sit and mull on what I just witnessed and watch it again to see if I had missed something, or whether the film was truly this bungled.

It’s almost impossible to go into the review with much depth without telling some rather huge spoilers, but I’m going to dance around the big ones and do my best to no spoil said surprises as much as humanely possible. Baker Dill (Matthew McConaughey) starts out the film as a modern day Ahab. He’s got his white wale in the form of a giant tuna fish that he’s nicknamed Justice. Living alone on Plymouth island, he forages for his giant obsession by day, and barely makes a living moonlighting as a tourist boat. Baker is on the rocks when he is suddenly approached by his ex wife Karen (Anne Hathaway) and offered a rather enticing proposition. It seems that Karen has remarried, and her new husband Frank (Jason Clarke) is an abusive scumbag. Beating her and mentally abusing Karen and Baker’s son Patrick (Rafael Sayegh), he has driven the woman to the end of her rope and she is willing to offer Baker $10 million to take Frank out to the ocean and feed him to the fishies.

But with the inclusion of Karen comes a burgeoning realization that not everything is as it seems. A mysterious fish and bait salesmen named Reid Miller (Jeremy Strong) soon delivers the crushing blow that this world, this island, this obsession with catching the tuna is all part of an elaborate ruse that delves heavily into science fiction and starts the actual unraveling of the film itself.

Serenity really thrives during the first 30 minutes of the movie, and in the trailer itself. The beginning with Baker being a tortured father who is struggling to get buy on this little island showcases some great intrigue and character development. Even the trailer doesn’t let you know what’s going to happen and really focuses on that first 30 minute segment to fool the viewer (or really to shield them from the massive twists and turns coming) into thinking that they’re entering a normal film. However, with Karen’s introduction comes a LOT of changes, and very few of those changes good. The film literally leaps forward as if shot out of a gun and begins to change directions every 15 minutes as if the boat is being driven by a drunk man. About ½ way into the film there’s a huge reveal with the mysterious fish and bait salesmen that literally turns the film into an episode of Black Mirror, and is so hilariously off the wall that I actually had to pause the film and finish laughing before I could continue on. The film doesn’t get any better from there, as it bounces around teasing the viewer with how the film MIGHT be going, only to shift it in another direction (and then back again) at the drop of a hat.

The frustration from the cast is palpable, with McConaughey, Hathaway and Clarke all turning in admirable performances, but their efforts completely hampered with the ADHD direction form Steven Knight. I almost feel bad for all involved as the film’s script had promise, and teased us with something more mysterious, more emotionally resonant and more impactful than what we were given. As I said earlier, the film thrives in the first 30 minutes of runtime, but once Karen comes to Plymouth the movie just devolves into a series of frogger like jumps that flit the plot all over the place. The one good thing that I can think of is that Serenity honestly has you wondering how the film is going to turn out, and you’re glued to the screen trying to see what that end game really is going to be (although the actual ending is just about laughable as the script and had me giggling hysterically as the credits rolled).

Rated R for language throughout, sexual content, and some bloody images

Shot digitally on the ever ubiquitous Arri Alexa cameras (and then transferred to an unknown resolution master), Serenity is by far one of the best looking Blu-rays I’ve seen recently. The glossy and brilliantly lit location of Plymouth island make for some of the best eye candy imaginable. The Blue ocean, the dusty brown of wood planks, the glistening orange of an alarm clock light. All show up with razor sharp clarity and fine details that are simply astounding. You can see every greasy hair on McConaughey’s head, as well as little nicks and dings on his fishing vessel. Foreground objects are incredibly revealing, down to the little creases and curves of the bandages on Frank’s wounded hand. Backgrounds are just as clean and clear, showing no signs of digital softness and even the underwater shots are devoid of banding and crush (something which is VERY hard to do in water shots I’ve noticed). This is a demo worthy disc for sure, and one of the best I’ve seen in a while.

While not a fancy 7.1 or Atmos mix, Serenity’s 5.1 DTS-HD MA track is more than capable at delivering a very engaging audio experience. The film opens up with a rather weak overture, but soon shifts over to a more stable listening experience as the world of Plymouth island opens up. The creaking and groaning of the boat mixed with the lapping of the waters makes for a really immersive time, and when the crashing of the thunderstorm comes into play things get really exciting sonically. The rest of the track is a fairly straight forward mix, but it is done with such impeccable precision that it gives the track a life of its own. You can hear mild ambiance in the surrounds from the bar, the water, the little noises out on the ocean, and the LFE channel is no slouch either. Except for the storm you really don’t hear it overly powerful, but there is a constant presence that is very noticeable throughout the film.

​
Serenity is a truly bizarre film that was COMPLETELY misrepresented from the trailer. Instead of a mysterious Neo-noir thriller, we get a near sci-fi level arthouse drama that just falls apart under the weight of its own ambition. Performances are solid, but that can’t make up for the bungled script and mediocre direction. For those of you who wish to view said debacle, at least the technical aspects of the Blu-ray are very appealing. The audio and video are pretty much demo worthy, but there are ZERO special features to be found on the disc. Something that makes me really sad as this would have been the perfect film for a commentary track, so that we could get into the mind of Steven Knight and figure out what he was thinking when he attempted the film. Skip It.

Thanks for the review, you saved me. I would have picked this up only because of Matthew McConaughey, but I think I'll skip it.
Jack

And not a Browncoat in sight, how disappointing...

Well I guess I will go against the flow on this... I actually enjoyed the movie. I have to confess I had an edible before I started to watch the movie though. I find that every movie is better with a little enhancing.