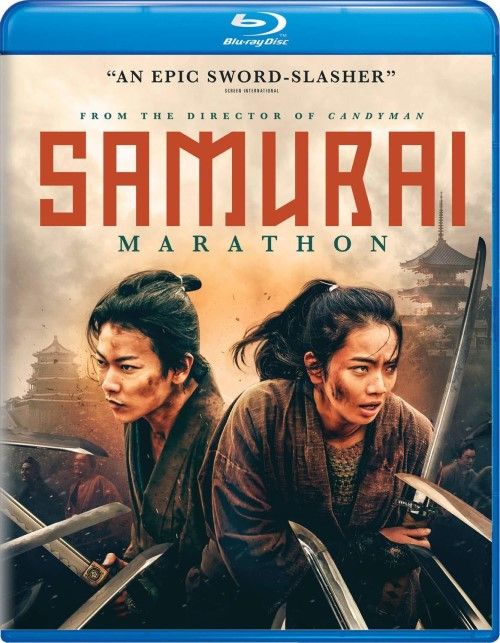 Movie
Samurai Marathon was one of the first films to get struck from the wave of Covid-19 delays. it was set to drop right at the beginning of May, but all of the nationwide shutdowns dropped RIGHT before it's release, meaning shipping houses and distribution lines were shut down for review. Instead of scuttling the film's release, or just scuttling the review, Well GO USA was kind enough to give us a digital copy to review, as well as simply delay the physical release a couple of months till all of the shutdowns went away. Thus we fast forward nearly 11 weeks and we FINALLY get to see what the disc looks and sounds like

I was rather excited about Samurai Marathon (also called Samurai Marathon 1855 in some locales) due to the fact that director Bernard Rose was making a hybrid Japanese/American production about the historical start of the famous Samurai Marathon that runs in Japan annually. Bernard is mostly known for directing the early 90s horror film Candyman, but he also is known among cinemaphiles as a rather unique and artistic soul who creates some fascinating works (I loved his take on Anna Karenina). After viewing I had to admit that it exceeded my expectations, but also was much different than I was actually expecting. It’s a period piece drama that was labeled as a blood-fest of an action movie, but in reality it’s a slice of Japanese history with hints of bloody violence woven into a tapestry of art history. It’s simultaneously beautiful, artistic, bloody, and slightly chaotic as well. Sometimes Bernard doesn’t finish some points, but the overall story is completely different, and utterly fascinating.

The story revolves around the origination of the famous Samurai Marathon that runs annually in Japan. Back in 1855 the United States and England were pushing hard for Japan to come into the modern era so that we could establish trade relations to them. The Japanese people were at a peaceful state, and coming to an end of the samurai era, but still resisting the westernization that was inevitable. The Shogun was considering signing a peace treaty with the U.S., but the rest of the Samurai warlords were terrified of the American weapons, as well as the idea that they might be conquered by the westerners. One warlord in particular decided that the threat from the “Black Ships” (as the U.S. fleet was called) was too much to ignore. Due to the fact that his samurai have gotten lazy from too much peace time, he decides to hold a 36 mile marathon race to toughen his men back up and get them into fighting shape. The prize for the winner would be any wish that person so desired him his lord, no questions asked.

However, the race is anything but an amiable jaunt like many of the participants feel it is. There are spies from the Shogun in the warlord’s camp meant to ferret out any betrayal to the Shogun. One of the hidden ninja named Jinnai Karasawa (Takeru Satoh) sends a letter to the Shogun telling him that his master is about to rebel, only to realize too late that the race is nothing more than an exercise to get the men ready in case of foreign invasion. However, it’s too late and the letter has been sent, which means assassins from the Shogun are on their way to kill the entire samurai fighting force and put down the potential “rebellion”. Simultaneously we have a sub plot about the lord’s daughter Yuki (Nana Komatsu) who wants to run the race as a “boy” in order to gain her freedom from the confines of an arranged marriage, a former guard who wants to train the new generation of samurai, as well as countless others who show no fear of betraying their fellow runners in order to get that coveted win from their lord.

Director Bernard Rose doesn’t make the film a true comedy, but he does have a very lighthearted and whimsical take on the race. Nothing is ever truly “funny”, so to speak, but there’s this feeling like every character is on the verge of telling a joke and just having fun. The story itself plays out as a slice of life tale, allowing us to see the machinations and the conniving act of all involved without bias or prejudice. There’s no real heroes, and no real villains, instead there are just people making decisions that we as observers are watching play out on screen.

While the film was labeled an action film, I’d say it’s much more of a historical drama with brief instances of bloody violence. The first 40 minutes don’t even have a single bit of action or violence, but once the race starts the tone shifts dramatically and the few fight sequences can be savagely brutal. I was completely fascinated by the raw and realistic portrayal of sword combat as well. Most of the time in these period piece films it’s like watching a Hong Kong action film. Perfectly choreographed fight scenes that look like everyone is a master of their weapon. Instead we see humans using their blades as a real human would. The fight between Jinnai and the other spy is amazing. It’s not overly flashy or wild, but shows two humans struggling to dominance with their weapons, and the realistic use of them as well (no fencing like, flashy blade work). There’s a few issues with budgetary constraints here and there (some of the impaling shots are obviously angled to LOOK like they’re impaling, but you can actually see the blades are off to one side), but Bernard did a fantastic job with choosing his fight choreographer. It adds the authenticity and historical nature of the film in ways I really appreciate.

I looked around on IMDB and several other locations to find the filming style and cameras used, but sadly I couldn’t find any solid info. From what I can tell Bernard Rose shot this thing digitally, but whether it was a 2K or 4K master is not something I could ascertain. The resulting 2.39:1 framed AVC encode is stunning on Blu-ray, and vastly outclassed the simple digital screener I was able to see back in may. The filming style is typical of Edo period Japanese classics, with bright greens and pale shades of underlying greens dominating, while hot whites and light sources slightly blooming accentuate the darker shades. Clarity is razor sharp, with every bit of mud, every cut, and every curve on a samurai’s clothing visible to the naked eye. I did notice a flicker of banding in some of the deep forest scenes, otherwise this is an excellent looking film, whether it be light or dark. Digital noise was very minor as well, and outside of those two little “issues”, this is an excellent looking encode.

The Japanese 5.1 DTS-HD MA track is a crowd pleaser as well. This is mostly a dramatic film, but it has a lot of boisterous action to it as well, especially in the latter half of the film when the Edo assassins come into play. However, the action is not NEARLY the attraction of this mix, but rather the nuanced ambiance of the film. Rain drops splash all throughout the rears and front of the room, and the deep thudding boom of the drums that announce the marathon will shake you to your core. The quieter moments are simple and precise, but when this mix kicks into overdrive it can do so at the drop of a hat. The screaming and yelling of samurai reverberate off of canyon walls, and the overall ambiance of the track is nothing short of superb. All in all, this is one of my favorite period piece mixes of the last year.

Samurai Marathon is a fascinating, if not slightly imperfect, film that takes a slice of life look at a piece of fairly unknown (outside of Japan) history. It's whimsical, bloody, very entertaining, if albeit not as historically accurate as one could have hoped for (according to my sources. I had a blast with the film and really enjoyed the raw and realistic approach to samurai culture. After a couple months of waiting we finally get to check out the Blu-ray and it looks and sounds great. Definitely worth checking out.