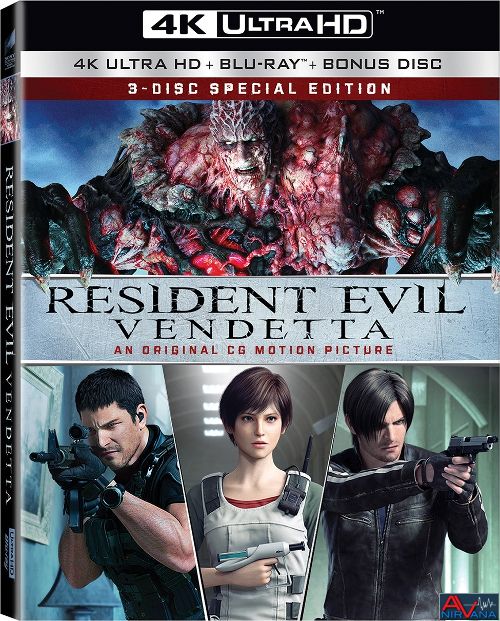 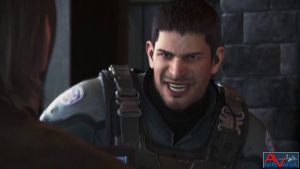 Movie
It’s been interesting to watch the two Resident Evil Franchises play out right next to each other. While the live action Resident Evil series (that just wrapped up after nearly 15 years) got the head start on the animated franchise by about 8 years, the animated films have been going strong ever since about 2010 with Resident Evil: Degeneration. What seemed like a one-off DTV animated move from Sony spawned another sequel a few years later, and finally we get a third movie in the franchise with Vendetta. Both series have run parallel to each other in releases, but neither the live action, nor the animated trio of movies crossover and take away from the other in any way shape or form. It’s well known that the Milla Jovovich films have about as much to do with the video game series as ice cream and rocks, but the animated films try to bridge that gap. Going back to the original characters and following many of the loose plotlines of the last few Resident Evil videogames, they still manage to forge their own path by deviating just enough to differentiate themselves from video game cutscenes, but also keeping enough of the original tone and feel of the games (along with animation style) to be a little more faithful to the source than the live action sextet.

Last time we left off Umbrella Corp was finally destroyed. However, the technology to animate the dead with the famous T-virus is still alive and well as smaller factions use said technology to create bigger and better Bioweapons to create chaos and profit. The latest in the long line of self-serving monsters is Glenn Arias (John DeMita), an arms dealer who had his family slaughtered at his very own wedding. Now he’s gone underground and has created a new virus called the A-Virus. This one works similarly to the T-Virus, except it can be modified to create bioweapons who know friend from foe, and target accordingly. When Chris Redfield (Kevin Dorman) is sent to capture Arias, he finds out that he’s bitten off a bit more than he can chew when he’s confronted with Arias’ new and improved monsters.

Heading back home Chris tries to attain the help of Dr. Rebecca Chambers (Erin Cahill), who has just about found a cure for the outbreak, when she is kidnapped under his very nose by his new nemesis. Now his only hope is bringing in another legendary zombie hunter in the form of Leon Kennedy (voiced by video game voice actor Matthew Mercer). The only thing is, Leon is sick and tired of living his life this way. He’s stuck in a little Midwest town drinking his sorrows away with Whiskey and cheap vodka, when he’s forced back into the fight once more. 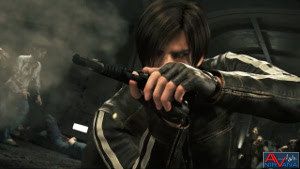 Vendetta loosely follows some of the plot from the 4th–6th games just a bit, but only in the overall generic plot. The dealings with Glenn Arias is pretty much purely from the drawing board, and the film plays out like a giant cutscene from the games. The animation is quite capable, but the motion and the style all feel like we’re watching a very high end cut scene rather than an animated film. If you’ve watched Degeneration or Damnation you know this is pretty much par for the course, making the series a loose string of battles that is very episodic in nature if you look at the trilogy as a whole. It’s fun to see Chris and Leon actually take front seat for once, considering how badly they were snubbed in the live action films. The two are given more zombie butt to kick than you can shake a stick at.

It’s nice to see that we’re no longer dealing with Umbrella for once. Glenn Arias is not the megalomaniac corporate stooge like Albert Wesker or the rest, but is instead a simple arms dealer who’s been dealt a raw hand and is out for revenge. It’s just that his revenge is kind of global and he’s willing to turn millions of people into zombies to do so. Slight difference there. Having a goal and a destination with a timeline makes the film feel a little more urgent and streamlined than previous events, but it still can’t get over the one defining flaw that the live action series shares with it. The fact that after the first couple of movies they really don’t have any real NEED to exist. The heroes have a new badguy, a new villain and a new monster to fight, and then it’s rinse and repeat for the next film. The franchise certainly has legs, but they’re shaky legs and the repetitiveness of the series is its biggest weakness.

Rated R for bloody violence throughout 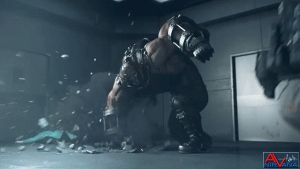 The 4K UHD for Vendetta is a nice improvement from the 1080p Blu-ray, and there are several very noticeable upticks in quality. The use of HDR enhances the colors quite nicely, and the neon shades of the gameverse is quite bright and startling at times. Black levels don’t show off the crush that the Blu-ray did, and the light banding I noticed is mostly gone. The 4K upgrade can’t do much for the limited video game (ish) graphics and the fine detail is only slightly better than the Blu-ray. Everything is still clear and clean, but the low budget CG animation just doesn’t reveal much more. Costumes and creature details are really the big uptick here, with more detail along the monster’s faces, and the lines seem to be easier to discern. Again, the HDR 10 is the biggest benefit to the image, with colors popping, and the end battle with Diego/Arias really looking impressive. 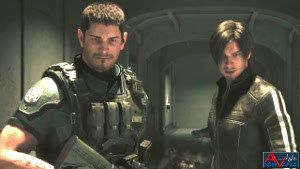 I did mention in the Blu-ray review that the Atmos track and the 5.1 mix were more similar than not, and that isn’t me saying that the Atoms track is garbage. It just falls prey to a slightly lower budget than your normal Atmos mix and the differences between the two tracks are fairly subtle. The sound design is wide and spacious, giving us quite a bit of directional changes that happen, ranging from bullet cases bouncing off floors, the roar of a helicopter coming up from the bottom of the screen, or the thudding of its rotors in the overheads. LFE is deep and guttural, and pounds away as fantastically as the Blu-ray did. The one major downside (or less downside as much as lack of the track’s finesse) is that there isn’t a whole of directional shifts that don’t happen in the standard “left/right” and “front/back” manner that your average 5.1 or 7.1 track employs. The overheads are used minimally and the Atmos ability to have object based orientation in the surround channels is a little more rigid than fluid. It’s a good track, and a solid performer, but it feels more traditional than I was expecting.

Resident Evil: Vendetta is what I like to call a nice “filler” movie. The animated trio that is out (so far) don’t really connect to the movies, and only loosely connect to plot points in the games as well, making them fun little 90 minutes (ish) romps that are meant to be taken as a side story from what we know cinematically, as well as what we know in the game world. Vendetta is about on par with the last two films, and was a fun little movie that really is just a fluffy piece of cotton candy monster movie mayhem. It’s not great, but it’s a yummy little treat that is worth checking out if you enjoy the Resident Evil universe. The audio and video is a solid thumbs up from me, and the extras are pretty cool with a nice 2nd disc of special features to enjoy. The 4K enjoys some noticeable changes from the Blu-ray, meaning that if you're going to be picking up the disc, I still would definitely recommend going with the 4K experience. Worth checking out.