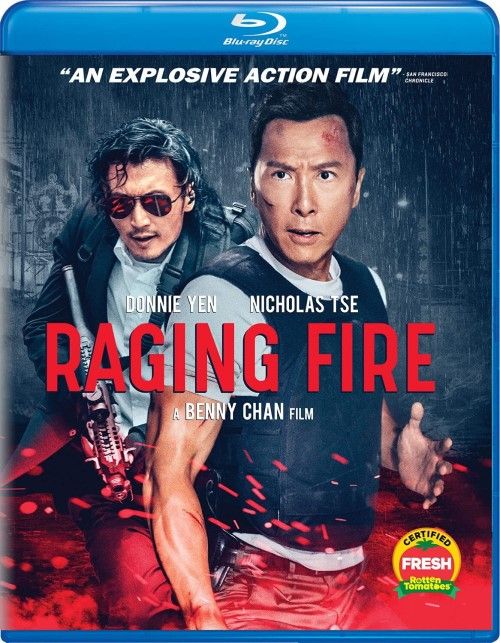 Movie
I’ll watch just about anything with Donnie Yen in it, but I had a strong desire to see Raging Fire due to the fact that this was prolific Hong Kong director Benny Chan’s last film before he fell to cancer this year. The director (not to be confused with the actor of the same name) has been making action films since 1990 as he worked with Jackie Chan (Who Am I?, New Police Story), Donnie Yen (The Kung Fu Master), Jet Li (Shaolin) and many more. The man has not only left his mark on the Hong Kong world, but on the whole world as he makes crime and action dramas for the better part of 31 years. He may not have been as ironclad as John Woo or even Tsui Hark, but Chan’s love of gritty crime dramas with high flying martial arts has made him almost as well known, and just as loved.

Donnie Yen is heroic and stoic cop Bong who was once tasked with recovering a kidnapped rich guy years ago. Everything is on the line if this guy doesn’t get recovered, so the commissioner whispers to Bong’s partner Ngo (Nicholas Tse) to do WHATEVER it takes to recover him and that the powers that be will back them 100%. Ngo does whatever it takes, and he and his men end up recovering the person of interest, but killing the gangster in the process before Bong can even get there and stop Ngo from going to far. As you can probably guess, in pure movie world logic, Ngo and his men get sent to prison.

Years later Bong is still running the straight and narrow, ticking off the higher ups for not taking bribes and bending the rules for the rich elite, and his punishment is being kicked off the task force for taking down a super criminal they’ve been following for 4 years. This turns out to be a blessing in disguise as the entire task force is wiped out by a mysterious band of masked men who turn out to be none other than Ngo and his men after they’ve been released of prison. Leaving no one alive to give their identities, Ngo and his men wage a guerrilla war against the people who put them in prison, and one cop in particular whose testimony put them away.

I’ve been a little disillusioned with Chinese action films recently. Ever since Hong Kong stopped being the powerhouse they were for decades and mainland China started doing film production they’ve been watered down copies. Plenty of action, but no heart, no soul, and feel more like propaganda pieces for the Chinese government rather than an actual MOVIE. Raging Fire just so happens to be the closest thing to an actual old style Hong Kong movie that I’ve seen in years. It has Benny Chan’s trademark slow motion “bad boy” villains, complete with Nicholas Tse chewing up the scenery. Donnie Yen has been sort of neutered in recent years when it comes to his lightning fast hands and feet, but Chan amped up the action to level 11, carefully blending top notch gun fights with his actor’s highly desired martial arts prowess. The end fight between Ngo and Bong is just what you would have hoped for, with Yen and Tse going at it mano e mano.

I was a little disappointed with the middle portion of the movie though. Raging Fire starts out with both barrels going full bore, but then as the mystery of “who are these guys?” progresses the film feels a bit bogged down. It gets slow, a bit sluggish, and the pacing seems to just drop a bit. However, it kicks into high gear for the last 30 minutes, and boy oh boy, it doesn’t let go.

One thing I must make note of is how well Nicholas Tse’s martial arts skills have come since he started out. I remember him when he worked with Jackie Chan and Donnie Yen back 20 years ago with Dragon Tiger Gate and Gen X Cops. He was just a pretty boy back then with a lot of flexibility, but he was trained for the movies by both men. Now, he’s a full blown martial artist. Not only can he pull off movie moves, but he was doing everything with proper technique and form too. Doing a little digging on Tse it appears that both Dragon Tiger Gate and Gen X Cops lit a fire under him in regards to martial arts passion, and he’s been practicing for the last 20 years. Which makes a lot of sense as I was watching him pull a jump spinning back kick with form and technique that was hitting WAY above what I was expecting for him. Bravo Nick, bravo.

Shot using RED cameras, Raging Fire looks really great on Blu-ray. Outside of the typical banding you see from most Well Go USA movies, this is a sharp and shiny affair. The color grading shifts from that green heavy teal coating that Asian movies love, along with the amber and golden swaths when dealing with low light and street lighting. Fine details are generally very good, with plenty of up close shots where you can see the stubble on Yen’s and Tse’s face, as well intimate clothing details. There’s some mild softness in regards to the CGI explosions, but otherwise this is a great looking digital image that should check all the appropriate check boxes to make for a pleasing home video experience.

Originally a Cantonese language film, Well Go USA has provide a Cantonese AND a Mandarin Dolby Atmos track, as well as a 5.1 DTS-HD MA lossless mix in English for those who don’t like subtitles. Both Mandarin and Cantonese tracks sound identical except for the dubbing, making me naturally lean towards the original Cantonese track. The English is a solid enough dub as well, but the 5.1 mix is not near as dynamic and raucous as the Atmos track, which once again, means I’m really going to be recommending the Cantonese mix once more.

Those nuances aside, the Dolby Atmos experience is awesome on the disc. Benny Chan films usually have amazing audio and this one is no different. The copious action scenes keep the surrounds and subs going full bore, and I even noticed some solid over head usage during the opening battle with Ngo’s men. The score is tight and clean, bass is rip roaring and aggressive, gunshots are actually evenly balanced in the mix instead of being mini howitzers. The track itself tends to be a bit more reserved in the center half when it gets very dialog intensive, but that was to be expected as the center half is the slow section of the film. Bass can really hit low and hard here, especially that final confrontation where grenades are going off left and right. All around great mix whichever language option you choose.

Raging Fire isn’t perfect, but it’s a dang good action movie that feel like a throw back to the early 2000s Hong Kong films. It also acts as a sad farewell to Benny Chan and his prolific directing career over the last 31 years. Well Go USA’s disc is no slouch either, showcasing dual Atmos tracks for the Chinese original language mixes, as well as a 5.1 DTS-HD MA for English speakers. Solid movie, great audio and video, but the typical meager extras. Still won’t keep me from recommending it though.

I rated this one slightly lower but, still enjoyed it overall. Thanks Mike...!