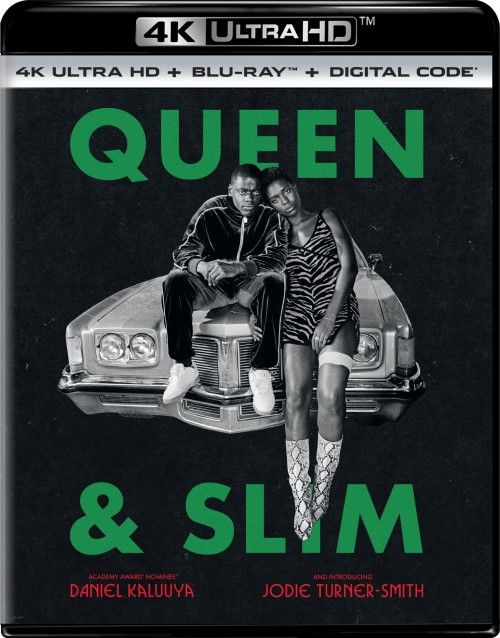 Movie
Queen & Slim has been hailed as the next great all black film, as it as written by a queer black woman, directed by someone of the same ancestry, starring black people, set against black people, and dealing with the ideas of social injustice against black people. Every review I could see on theatrical opening night was how it was the most snubbed movie of the Oscars, and how it was the greatest thing since sliced bread. Then there was the opposite who thought it was complete garbage and not worthy of seeing. Honestly, It was a little bit of both. Lena Waithe (Ready Player One) digs into some social issues that are hot spots today, and while I’m sure she and Matsoukas believe that their film was deserving of an Oscar, I can certainly see why it wasn’t even nominate really. The story is clunky, and Waithe pushes a political narrative without ever really fleshing out the characters. It plays like Bonnie & Clyde, but fails as both social commentary and thrilling crime drama due to the weak direction. It’s an OK movie, and one that has a hard time really deciding what it wants to be.

Queen & Slim deals with serious subjects. In this case it’s racism and the hot spot that is the debate over police shootings of African Americans over the years. However, it deals with it a bit lightly for the first 15 minutes or so. While we never hear the terms “Queen” and “Slim” throughout the movie (it’s given to the martyrs during the ending credits) the two are introduced to us right off the bat. Queen (Jodie Turner-Smith) and Slim (Daniel Kaluuya) are eating at a late night diner in Southern Ohio for a rather awkward Tinder date. The two obviously have nothing in common, and the date is going poorly. Slim is a laid back guy with a sweet disposition, while Queen is a bit of a snooty and high strung lawyer who just went out with him because she had a bad day when one of her clients was sentenced. The date naturally comes to a close, and Slim drives her back to her place, only to get sidelined by a police cruiser.

Yup, you guessed it. The cop (played by Sturgill Simpson) isn’t your typical racist cop you see in this situations. Neither is he twitchy fingered and a nervous rookie. Instead he’s a plain psychopath (seriously, from the way he’s portrayed I’m shocked he doesn’t cap people every night!) who beats the young man around and whips a gun to his head for no apparent reason. A slight altercation ensues and Slim is forced to grab the officers gun and shoot him when the cop randomly puts a bullet in Queen. Here’s where the movie switches from cute rom-com to horror/thriller. Queen “knows the system” (rolleyes) and throws away her entire life and career to just “run!” as she tells Slim. He wants to turn himself in and explain the situation and hope for a dash cam or body cam captured the whole thing, claiming he’s not a criminal. “You are now” Queen states, and the two head out on the road desperately thinking of a plan to get out of the country.

The film is a bit odd. On one hand I really REALLY like the cinematography. The surreal, dreamy, direction with the camera work is nothing short of superb. I was completely mesmerized and drawn into the world of Queen & Slim simply due to the very artistic approach with the visuals. However, the movie itself is a bit weak, and makes me wonder WHO this film was really aimed at. It doesn’t seem to be African Americans, as the film makes jokes about fat black men (seriously, I winced at that scene in the parking lot as it felt like a scene out of a parody about black people), puts down Queen much of the film, and blatantly shows her defending her uncle who actually killed her mother years ago! Also, I can’t place whether it’s demonizing the duo, or lionizing them, as the two get mixed reactions from the other characters, as well as what seems to be the writing. There is an entire scene where a black mechanic gives them a lecture about giving the cops more ammo to come against them with, with their Bonnie and Clyde stunt, while other times cheering them on.

Sadly one of the most tone deaf scenes in the entire movie is the son of the auto mechanic who lectured them. The young boy idolizes them and attends a violent protest over the police chase of the duo (seriously, the dash cam proves everything and is being played over the news 24/7, yet they’re still going after them guns blazing), and ends up point blank executing a black officer so that he can “be like them”. Supposedly according to interviews with Lena there was supposed to be a scene where it’s stated that the officer had family too and was as much a victim as Queen & Slim, but the movie skips that sequence, instead making it seem like the kid is just sticking up for the two by executing a cop who did nothing wrong.

Rated PG for action/peril and some thematic elements

While being shot on 35mm film, Queen & Slim was given a 2K digital intermediate and then transferred to 4K UHD disc. Still, while it’s not a native 4K transfer, the disc looks superb on Blu-ray, even when compared to the already fantastic Blu-ray that got a 5/5 rating for video. The visual clarity is head and shoulders above that of the Blu-ray, giving off razor sharp shots of the two heading down south to make their escape. The film comes with Dolby Vision and HDR, both of which do wonders for the black levels and colors. The splashes of color at Uncle Earl’s house is fantastic, and the deeply stylized black levels of the film show no signs of banding or crush to the naked eye. There’s still a bit of softness here, and the absence of a 4K master keeps it from getting AS sharp as I feel it could have been, but the 4K UHD disc is certainly stunning.

Universal has given the film a nice Dolby Atmos track, but at the end of the day this is a fairly talky movie that doesn’t take full advantage of the Atmos capabilities. The dialog is really the main stay of the production here, with good dynamic range for some of the more boisterous scenes. The rumble of the Catalina murmurs in the background, while the sound of a gunshot going off slams you back in your seat. The surrounds are fairly active with good sonic immersion for the big riot, as well as a few scenes with the two on the road. The score really is the biggest and most spacious sounding bit of the whole mix, and it’s done incredibly well with the more urban hip hop songs, as well as the soulful Luther Vandross crooning. It’s beautifully done, but also not a wildly dynamic mix so at the end of the day it falls into that “very good” category instead of the “great” one.

• Feature Commentary with Director/Producer Melina Matsoukas and Writer/Producer Lena Waithe
• A Deeper Meaning - Daniel Kaluuya, Jodie Turner-Smith and filmmakers discuss the complicated journeys of Queen & Slim and explore the deeper meanings of how far these characters have come from where they began.
• Melina & Lena - A behind-the-scenes look at the creative partnership between director/producer
• Melina Matsoukas and screenwriter/producer Lena Waithe.
• Off The Script - Screenwriter Lena Waithe reads from her original screenplay for Queen & Slim.
• On The Run With Queen & Slim - Go behind the scenes with the cast and crew of Queen & Slim as they film in Cleveland and New Orleans.

​
Queen & Slim is a movie that exemplifies what happens when you put your characters and message up as a political statement first and foremost, and worry about fleshing out the narrative later. The film is gorgeously filmed (so much so that it sort of makes up for some of the deficiencies in the script), but it beats you over the head with the message of police brutality without really making a case for WHY they’re beating you over the head with it. Everyone involved in the whole situation seems to be at fault from the two on the run, to the cops, to even the people who help/hinder them. It’s a frustrating thing to want to like a movie and yet still see major flaws in it. Especially when the cinematography is so sumptuous. The disc itself is stunning, with great video, good audio and a decent amount of extras to pad out the release. Rental would be my personal take on it.