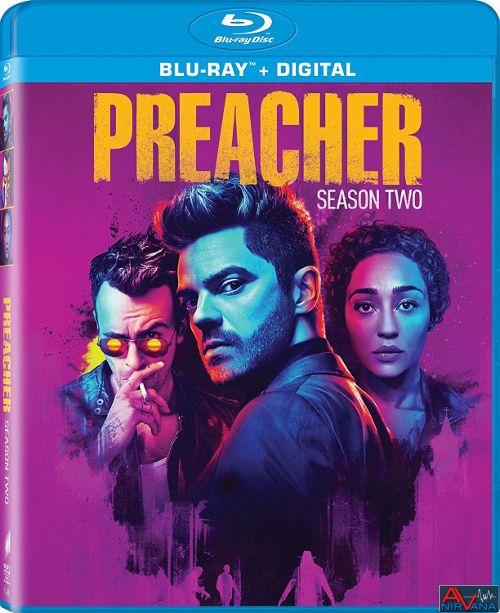 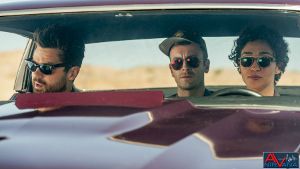 Movie
I mentioned in my review of Preacher: Season One that I never actually expected this project to get off the ground. It’s not that I don’t like the graphic novels, or am not having a BLAST with the series. It’s just that the premise and nature of the show is so bizarre and off center that I wasn’t sure that mainstream audiences were going to really latch on to the series. However, show runners Sam Catlin and Seth Rogen (yes, THAT Seth Rogen) decided to go along with a first season and I ended up LOVING the 10 episode arc, even though it wasn’t completely faithful to the comics in part. That being said, Season Two picks up the pace dramatically, and now that the backstory and stumbling around in the dark in regards to Genesis have been fixed, the show hurtles forward at a breakneck speed. I will grumble and whine at a few points during this review, but most of it is superficial comic book fanatic grumbling, as the second season is way too much fun at times, and brings in some iconic characters for Jesse to overcome.

After the events of the stunning season one finale, Jesse Custer (Dominic Cooper) is no longer herding his little flock at his daddy’s church. With God missing from heaven, Jesse is feeling more than a bit betrayed and he wants answers. So, he, Tulip (Ruth Negga) and the Irish vampire Cassidy (Joseph Gilgun) decided its high time for a road trip and sets out in search of the missing god. Unbeknownst to the three of them, the two Angels, Fiore (Tom Brooke) and DeBlanc (Anatol Yusef) have gone down to the depths of hell and hired the Saint of Killers (Graham McTavish) to come and hunt down Jesse in order to get rid of him AND Genesis. Armed with weapons from hell, and an inability to die, the Saint stalks their every move, homing in on Jesse every time he uses “the voice” like a wolf who has caught the scent of blood.

The Saint of Killers is an incredible villain, and one that is slightly mishandled here (in the graphic novels he is a much more human character. Struggling with his inner demons and the task of being heaven’s killer throughout the ages. Here he’s more of a hulking brute that seems to not have much going on behind those dead eyes of his), but Graham McTavish just makes the gigantic cowboy into one of the more memorable villains to date. While The Saint may seem to be the big villain of the season, it’s all a misdirection. The show’s jump from 10 episodes to 13 episodes allows a few more main stories and plot lines to be explored, ranging from Eugene being stuck in hell with Hitler, Tulip’s side story in New Orleans, and Cassidy’s dealings with his wayward son. However, all of those are just leading up to the big bad villain that we all know is coming, Herr Starr (Pip Torrens). 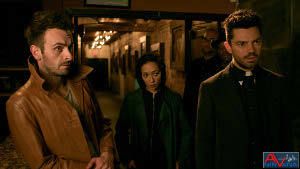 The second season is a wildly kinetic ride and seems more comfortable in its own skin during the sophomore year. Jessie, Tulip and Cassidy (well, Eugene and the Saint too) are really the only recurring characters from the first season due to how that finale went, but they open the door for some great villains and heroes to emerge. I felt that Eugene was largely wasted last year, but this year we get to really delve into the pain of his past and see what got him into this predicament in the first place. Tulip was incredible and still is, but the side story with her and Viktor (guest starring Paul Ben-Victor), and Cassidy’s son just seem to bog the story down in the middle half. It’s not until Jessie starts going off the rails and turning everyone against him that the main story line begins to get wickedly good.

You see, Jessie may seem to be the hero at first, but as time goes on in the show he slowly starts getting a little too big for his britches as Genesis allows the guy to get a bit too big for his britches. This massive ego is all the foothold that Herr Starr needs to get his dirty little claws in him and start grooming him for the season finale, which puts him against his own friends and even the Saint himself. It’s this little twist that kept that huge smile all over my face, with Jessie starting to flip allow the very demons that he tries to fight to turn him into one himself. 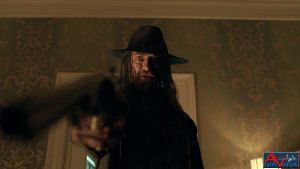 The 1.78:1, digitally shot TV show looks excellent on Blu-ray. The series is heavily stylized from the get go, with earthy and dusty golden browns dominating the landscape, but once the series gets out of the little old town from season 1, the color palate lightens up a bit, and we’re privy to neon purples and blues of a nightclub, or the rustic greens of Texas farming community. Detail is very strong all around, with the digital nature of the filming style allowing us to see everything that can be scene in the show. Scenes shift from pitch black night to bright sunlight from episode to episode (well, less sunlight when Cassidy is around as the poor bugger can’t exactly be out in the sun), and the show happily manages both extremes well. The outdoor daylight shots are slightly over exposed on purpose, showing extremely bright golden hues, while the darker shots tend to be almost inky black to the extreme. I did notice a bit of crush there, and the series likes to display some digital noise in the darkness, but overall this is an excellent looking series with a nice stylized nature to it. 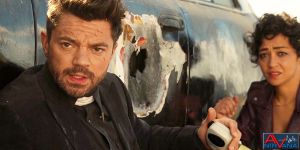 Like the previous season, Preacher comes to Blu-ray with a rocking 5.1 DTS-HD MA track that really lives and breathes with the music. The dialog is still a major component of the show, but the music just flows through the series with incredible ease, winding its way through each and every scene and giving them a distinct and different flavor than the one that came before. Surrounds get hot and heavy with the music, but also the copious action scenes as The Saint of Killers tears his way through his opponents like paper tigers. Gunshots are deep and guttural, and the splatter of brain matter on a wall will bounce and shift across the sound stage. LFE doesn’t let up at all with the heavy footsteps of the old cowboy thundering in the fore ground, while the roar of Tulip’s 1972 Chevelle throbs in the background. An excellent track, all around. 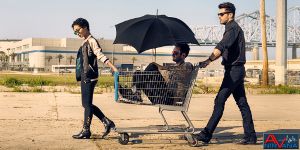 Preacher: Season Two takes off with a much more faithful replication of the graphic novels, but it does have its hiccups along the way. The frustrating middle act of Season One is not duplicated here, but the portrayal of the Saint of Killers does leave me with a slightly bitter taste in my mouth as a rabid fan of the graphic novels growing up. HOWEVER, this season’s amping up of the gore and action makes it a whole lot of fun, and mitigates most of the problems I had with the show. It’s a hoot and a half to watch and Joseph Gilgun once again steals ever scene that he’s in with his thick Irish brogue and devil may care attitude. Audio and video are excellent representations of the format, but sadly the extras (which weren’t overly wild on the Season 1 set) are cut down to just a gag reel and a simple featurette. A huge disappointment as the show just is BEGGING for a commentary by Rogen and crew. Still recommended for a fun, yet bizarre, watch.

Thanks for the review. Will have to catch season 1 first.