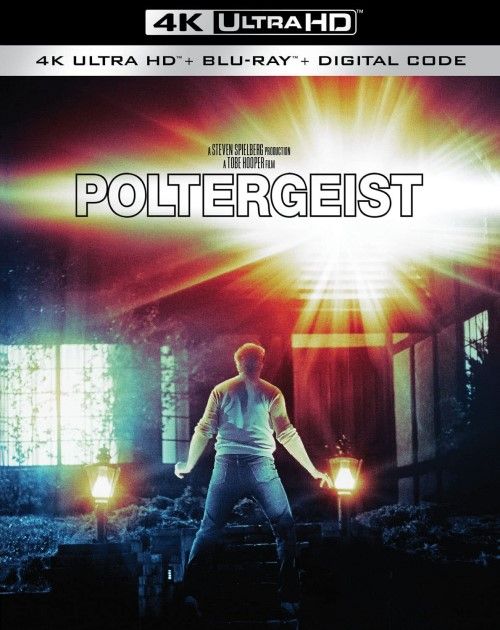 Movie
Almost 14 years after being one of the initial batches of Blu-ray discs on the market (with a fabulous digibook package) we finally are able to get one of the biggest 1980s horror movies in 4K UHD. Poltergeist was one of those flicks that I grew up watching on repeat, being not only a child of the 1980s, but it being one of the films released when I was born so it holds a bit of a special place in my heart. Directed by Chainsaw Massacre’s Tobe Hooper and co-written/produced by Steven Spielberg, Poltergeist is a tour de force of mind altering practical effects (for the time) and heart pounding suspense in what is known as one of the best “family friendly” horror movies of the decade.

The Freeling family is living the idyllic American dream in suburbia. Father Steve (Craig T. Nelson) is a big time real estate developer in one of the largest firms in Southern California, while his wife Diane (JoBeth Williams) raises their 3 children. They do what all American families did at the time, with Steve enjoying football with the guys, and Diane trying to keep the household together while a new pool is being dug out in the back yard of their new tract home. However, when youngest daughter Carol Anne (Heather O’Rourke) starts displaying odd signs when she talks to the white noise on the TV, the family writes it off as simply a child playing with an imaginary friend.

While Carol Anne’s friends are certainly not visible, they also aren’t imaginary either. When Carol Anne is yanked from the world of the living and into the spirit realm, the Freeling family has to figure out a way to get their daughter back before it’s too late. Enlisting the help of a paranormal research expert and finally a medium named Tangina (Zelda Rubinstein, who also shows up in the mediocre sequels), they do the unthinkable. Penetrate the spiritual realm and go in after the young girl.

One of the best parts of Poltergeist is Tobe Hoopers laid back groundwork setting for the film. He spends the first act of the movie setting up the idyllic world of suburban life, completely with all the trimmings in a slow paced burn that gets the rug yanked out of it in the second act. The rest of the movie just simply builds upon that rug pulling act amping up to an absolutely incredible final confrontation with the realm of the dead in what was one of the biggest special effects extravaganzas of the early 1980s.

It’s haunting, terrifying, silly, and slightly outdated, but Poltergeist remains one of the biggest sci-fi/horror movies of the 1980s, and a movie I can watch over and over again. Looking at it from a modern perspective, we’ve definitely seen scarier. And the special effects monsters and goo don’t hold a candle to the CGI we have nowadays. But no matter how dated they might be, the meticulously developed story makes up all the difference in some of the goofiness. That final 15 minutes are a pure pulse pounding ride, with one of THE best horror endings in the industry. 40 years later, I still get excited watching Diane trying to protect her children from the spirits vying for their dominance, and that ending is simply cinematic gold.

Poltergeist was struck from a brand new 4K remaster, one which not only is what the 4K UHD disc, but also the included Blu-ray (which replaces the decent, but aging, 2008 disc), and the results are spectacular. I have never seen the film look THAT good before, and was literally marveling the whole time. The movie is definitely coated in a nice layer of film grain (with only a few minor spikes, such as the beginning of chapter 2 when we’re panning across the field), and resolution is incredible. Fine details throughout the Freeling home are spectacular, with in focus front and center shots showing the most improvements. The film was shot with a sort of fisheye lens much of the time, but it’s not a huge deal. You just notice it along the edges of the screen as the things warp just a bit along straight lines. The HDR application is superb, making the blacks as silky black as can be, and the bright blues and whites and ectoplasm pinks show up superbly. All in all, this is a fantastic looking disc that is near perfect.

As noted, the included Blu-ray is also struck from this new master, and upon comparing to the old 2008 Blu-ray it’s a definite upgrade over said 14 year old disc. Colors are more stable, textures more precise, and the whole image just looks cleaner and more vibrant. The DNR that was present on the 2008 is gone, and outside of the fish eye lens issues that inherent to the shooting process, this is almost as superb as the 4K disc.

The old 2008 disc sported a 5.1 Dolby TrueHD (remastered) track and the original audio in 192 kbps lossy Dolby Digital 2.0. The 4K UHD has both the 5.1 and the 2.0 tracks still, but has repackaged the TrueHD track into DTS-HD MA 5.1 (which sounds just about identical outside of level balancing), but the original 2.0 audio has gotten a major upgrade in the form of 2.0 DTS-HD MA lossless. As stated, the 5.1 mix is identical to the old Blu-ray, which was always a great sounding mix. Sometimes voices are recorded a bit low, but otherwise it’s a spectacular sounding mix with pulse pounding surround effects, and some serious bass. The 2.0 track shows the most actual improvement though, as the tinny voices and compressed dynamics of the 2.0 lossy track is completely upgraded with a much fuller and richer stereo sound in lossless.

Poltergeist is a classic for a reason. 40 years later and I’m still at the edge of my seat as Tommy looks under the bed for his missing clown, and the fact that this was a Spielberg production makes it all the more cinematic (the man was gold back in the 1980s, even when he wasn’t directing). The new 4K UHD disc is struck from a new master (as is the included Blu-ray, not just a replication of the 2008 disc), and definitely is worth grabbing if you’re even a remote fan. Highly recommended.