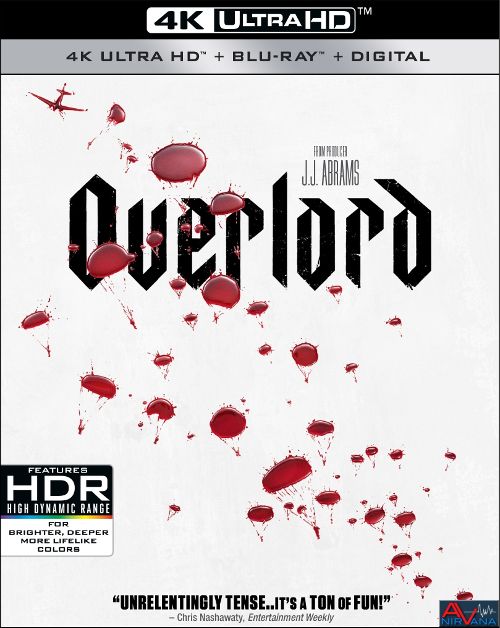 Movie
Originally fans were led to believe that Overlord was the 4th film in the Cloverfield series, and as J.J. Abrams REALLY likes to play things close to the vest, this rumor wasn’t dispelled till the first trailer dropped for the film last year. However, while that may not be the case (I’m still eagerly awaiting the next film in that franchise), Overlord is a completely fun, completely pulpy, completely trashy horror war movie that really is a walking incarnation of Wolfenstein. When I heard about the concept of the film before release I thought to myself “that’s really kind of like the old Wolfenstein games that I used to play”, but after watching the movie. Yeah, it’s pretty much as accurate to that theory as one can humanely be. Overlord takes a cue right out of the old sci-fi Nazi playbook and pits undead creations of Hitler against a small squad of USGI troops who are just caught up in trying to blow up a communications outpost. It’s pulpy, goofy, gory as all get out, and 100% fun from beginning to end.

On the day before D-day, American troopers were sent into key French locations to take out communications and destabilize Nazi forces so that the ground invasion the next day would be a more solid success. A squad of U.S troops is sent across the border into France to take out a communications tower inside of a French village church and ends up getting a WHOLE lot more than they bargained for. Right upon entry into the country they are set upon by German forces, have to thin their numbers by way of a mine field, and take refuge in the home of a lovely French woman named Chloe (Mathilde Ollivier). The German troops outnumber the 4 or 5 remaining survivors 10-1, and their chances get even slimmer when Boyce (Jovan Adepo) takes the German commander hostage when he attempts to assault Chloe.

However, things are about to become a total nightmare, as the town is not what it seems. The German soldiers seem to be occupying the town for more than just a communications tower. Strange goings on are happening with villagers whisked away in the middle of the night and a German doctor seemingly doing experiments in the vault of the church tower. Boyce’s mission to bring down the tower turns into so much more when they find out that the experiments are unholy machinations to bring the dead to life and create Uber-Soldats (Super Soldiers) to help the Third Reich take over the entire world. Now the 4 soldiers have to blow up the church, kill the undead (or re-kill them I might say) and get out alive without being infected by the super soldier serum and make it back to the rendezvous.

Overlord doesn’t try to stick close to historical war fiction, but crafts just enough reality to make the sci-fi/fantasy nature of the flick JUST believable enough to work. If I had to make a direct comparison to films already out there, I’d say it’s akin to World War II war movie meets the later Resident Evil movies in tone and feel, with just enough of the original Wolfenstein Super Soldier theory thrown in for good measure. The film’s plot line is about as short and sweet as a video game’s as well. We have the plucky commando’s getting thrown into a nasty war situation, then the big evil villain (in the form of the German commando) makes them get in WAY over their heads, culminating in a mano-e-mano battle to the death at the end, with both parties souped up on the special zombie/super soldier sauce.

The film is ridiculously gory, with black zombie blood oozing everywhere, gunfire blowing people in half, and a tense “horror” like vibe to all of the action. There’s not a whole lot of super intelligent story telling, but if you’re a fan of video game horror series brought to the silver screen, then you’ll get the formula that director Julius Avery was going for. While I had a blast with the film, I do have to admit that I was a LITTLE disappointed with the ending. With all of the gory buildup I was expecting a bit more, and the end fight with the German commander and GI’s just felt a bit “flat” in comparison. It’s not a wild issue, but just one that I did notice after seeing the film a couple of times.

Overlord was shot digitally and then transferred to home video from a 2K digital intermediate and upscaled for the 4K UHD disc. The 1080p Blu-ray disc was nice, but had some problems resolving the darker elements of the movie on screen. Blacks could get a bit crushed, some artifacting went on, and there was some softer elements to the movie. Despite being a 2K upscale from the master, Overlord ends up looking really nice in 2160p. Blacks are deep and inky (which is paramount as the movie pretty much lives in murky shadows and underground grottos), and fine detail is razor sharp. You can see the sweat and gleam from the U.S. GI’s faces, as well as the dirt and grime caked on their hands and uniforms. Some of the practical “zombie” effects show their low budget natures at times, but it’s more of an oddity as the rest of the picture looks great. The underground grottos are well detailed, and the French countryside looks brightly saturated with greens and inviting. Overall it’s a solid step up from the Blu-ray and a good looking 4K encode.

Now the single crowning achievement of the disc is the Dolby Atmos track that is found on the Blu-ray and 4K UHD discs. The first opening salvo with the soldiers flying over Normandy just slams the listener back into their seats with a ferocious power of the undead and doesn’t let up ONCE throughout the track. The sonic assault just rips apart speakers, lays waste to your listening position and leaves the audience feeling like they just went through a war. Once in the French countryside the track calms down a bit, but is still peppered with bouts of thunderous gunfire, as well as rocking explosions and heavy fisticuffs. The surrounds are awash with the scratching, moaning and creaking of the under ground grottos, and the machine gun fire between the U.S. commandos and the German forces comes intensely from all sides. Sub woofer action is beyond ridiculous, and the amount of low end action in the movie painted a big, sloppy, smile across my face from beginning to end.

​
Overlord is not an overly intelligent film that is meant to spawn hour long discussions about the meaning of life, and probably won’t be for everyone. it’s gory, pulpy, and pretty much a walking representation of Wolfenstein on film (or as close to a Wolfenstein film as we’ll probably ever get). I had a big sloppy grin over my face the whole time, reveling the pulp fiction war gore of the concept, and loving every second of it. The 4K UHD disc is a nice solid step up from it’s Blu-ray counterpart in the video department, although it shares the same incredibly perfect audio track with that disc. As a fan of the Resident Evil movies, and a HUUUUUUUUUUUGE fan of Castle Wolfenstein growing up (having played every one since the old Windows 3.11 days), Overlord is that perfect mixture of garbage, cheese and madhouse fun that makes for a fun pulpy watch.

Thanks for the review. Will check it out and yeah, I did play Castle Wolfenstein as well. Enjoyed it!

I will have too give this one a spin...looks like a fun watch.

I’m looking forward to it. Thanks for the review.

All I can say is: IN

I thought they had stated that the Cloverfield series was done...that they were not making anymore.

phillihp23 said:
I thought they had stated that the Cloverfield series was done...that they were not making anymore.
Click to expand...

I will definitely watch this one. Thanks for the review.

Rented this last night and one way or the other it will be added to the collection! We had a great time enjoying the mayhem. One of the most aggressive Atmos soundtracks I’ve heard to date. The opening act was pure sonic bliss and definite demo material.

JBrax said:
Rented this last night and one way or the other it will be added to the collection! We had a great time enjoying the mayhem. One of the most aggressive Atmos soundtracks I’ve heard to date. The opening act was pure sonic bliss and definite demo material.
Click to expand...

Cheater....suppose too wait for the drawing too end

phillihp23 said:
Cheater....suppose too wait for the drawing too end

I really enjoyed this one and the audio was unreal.

yeah, the bass on this thing was frightening. Wasn't as insane as The Quiet Place (I actually feared for my driver's life in that one), but it was unreal at times

Michael Scott said:
yeah, the bass on this thing was frightening. Wasn't as insane as The Quiet Place (I actually feared for my driver's life in that one), but it was unreal at times
Click to expand...

Yes I agree A Quiet Place bass was insane. The Nun was a bass monster too!

yes it was. A horrible, HORRIBLE movie, but a bass fest for sure (The Nun that is).