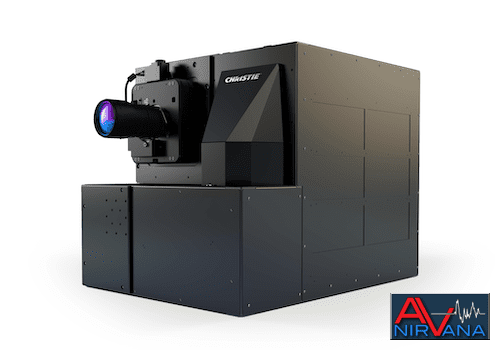 (September 3, 2021) When we close our eyes each night, our brain begins a journey through four stages of sleep. Stage 1 is a short-lived period where we doze off, Stage 2 sees brain activity slow, Stage 3 is a deeper non-REM period where recovery and growth occur, and then the gloves come off as dreams become intensely vivid during Stage 4 REM. Most of the AV gear we discuss falls somewhere between budget-oriented, or Stage1 non-REM, to the pricier high-end world of Stage 3 Delta sleep. That reserves true Stage 4 REM for the rarified air of mind- and budget-blowing dream machines like Christie's video dominator, the Eclipse 4K RGB Laser Projector.

The Christie Eclispse 4K RGB is nothing short of modern projection perfection, sporting a native contrast ratio of 20,000,000:1 and up to 26,000 ANSI lumens (more than 8 times the light output capability of flagship projectors that cost $20,000). Its onboard light source is rated to produce 30,000 hours of optimal performance to 80% brightness, while six DLP chips combine for 4K resolution, frame rates between 24Hz and 120Hz, full Rec. 2020/2100 color space coverage, and 3D capability.

Recently, Christie announced that Absolute Ultimate AV (AUAV) has been handed the keys to the castle, and will serve as the company's exclusive global representative for Eclipse. Seeing as though AUAV describes itself as having a "track-record of unrivaled excellence" and a corporate mission to "impartially cherry-pick and provide nothing but the absolute ultimate with respect to AV," it's no surprise that leading-edge gear like the Eclipse would become an exclusive product in its portfolio.

If you'd like to bring the Eclipse into your home, you'll need more than a simple ceiling mount. The projector's head weighs a whopping 346-pounds and its laser unit adds an additional 330-pounds. Of course, the real number with heft is its overall price tag, which reportedly lands somewhere in the neighborhood of $250,000 to $300,000.

Yes, one can dream.

If you ever have an opportunity to see what it can do, definitely take advantage!

Would this projector be used in mainly large auditorium sized theaters due to its incredible light output? Or is the picture quality so great that even a basement home theater would be a good home? Just curious : )

No, not necessarily. It's used in super high-end home theaters with large screens. A few years ago, Digital Projection had several large screens at CEDIA, we're talking 200" (maybe more?) and their flagship projector was throwing about 12,000 lumens.

The picture quality on a smaller screen would be ridiculous... but you'd have to account for two things: throw distance and lumens. You'd blow your eyes out if this thing was filling a 120" screen at 26,000 lumens... but, it would have enough output that, when tamed, HDR would pop. As for throw distance, I'd imagine its optics would require more distance than the average 18' long room. Out of curiosity, I'll dig around and see what kind of information I can dig up.

I would imagine that these would sell like hotcakes into Film Post Production, Special Effects and Realtime Government C4I Systems environments... Just don't ask how I might know that...

ddude003, now I HAVE to ask...do you/did you work in post production? I only was in it for a brief time in my career assisting a color/sound facility : )

Not directly... I did hardware and software technology consulting and systems integration as well as pre and post sales support to the west coast entertainment industry as well as gov special systems customers... Nuff said...

So, which malls have nuclear silos under them?

I know that jvc sells pjs with their BLU Escent laser tech for use in flight simulators…you’re talking about bigger environments.

Anyone want to guess how many of these they sell a year? I’d say 30.

I could tell you @Todd Anderson and then we would have to go Leavenworth or Gitmo...

Christie themselves suggests that there are 15 global markets for their products... If they only sold 2 of these projectors into each of those markets that would account for your guess of 30 @Todd Anderson... With all the competitors in these markets it seems to me that there is a rather large overall market for the higher end of digital cinema/projector technology... I think christie could sell 30 of these to Studio heads and Producer/Directors for their "home theatre"... Think folks like Spielberg, Lucas and Cameron for instance...

You'd be the first member of the AV NIRVANA community at either facility. A badge of honor, if I say so myself!

Lol... @Todd Anderson, I did not know that I would have to provide you with a 1 to 3 year business plan, including a marketing and sales plan too...

Ok... I'll be conservative and go with 100-150 first year, 250-350 second year and 400-500 the third year... How many high performance graphics labs are there in the world? University, Aerospace, Gov DOE type Labs, Weather Forecasting Labs, No such agencies & the Military.. I'm just scratching the surface... How about Energy (oil) discovery Labs... Film Entertainment Creation and Digital Cinema delivery... Automotive design Labs... Chemical and Bio design and discovery Labs... You mentioned Flight Simulation to which I would add professional Race Car Simulation. Like Formula 1 and Le Mans Prototype Endurance style... Need I go on???

You would have to have a peek at their books to understand their operating expenses with 1,200 employees spread across a dozen or so countries... I have no clue what it takes to do their R&D, Product parts and assembly chain... So I can't really comment on what estimated profits might look like...
Last edited: Sep 6, 2021