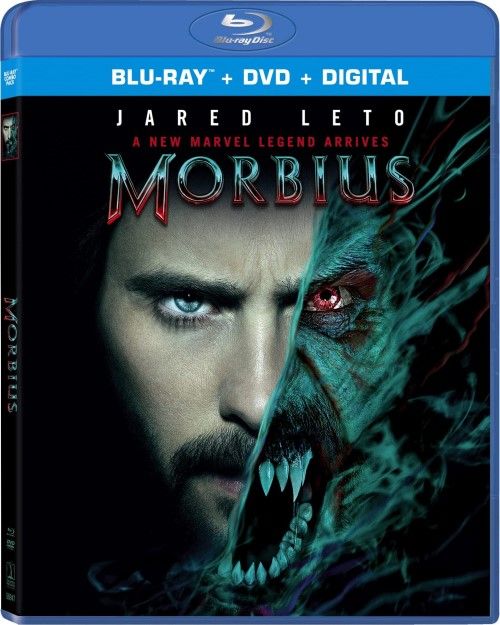 Ahhh, Morbius, the 2022 super hero film that I wanted to love, depressingly hated, yet ended up liking it through all of the abject hatred. I really feel sorry for Jared Leto. The man is a talented actor, but every time he tries to make a go of things as a main character, or as a lead in a super hero film, his movies just BOMB. I originally was VERY excited for Morbius. Michael Morbius the living vampire is one of my favorite anti-heroes, as I grew up reading Spiderman comics and still have the issue where Morbius was introduced to the Marvel Universe. He’s a fantastically brutal anti-hero, and while he’s not as popular as Venom, made a successful run as an antagonist for both Blade and Spiderman alike. Not only that, the movie’s initial trailer a year or so ago intrigued me as I was getting bored with how cookie cutter the Marvel produced films were getting. It looked dark, spicy, and I had high hopes for it.

Lo and behold the first cracks in the armor of my hope was when I noticed that the writers were the same pair who wrote Gods of Egypt, The Last Witch Hunter, Power Rangers, and Dracula Untold. Lets just say that their writing history is not exactly something that inspires confidence. Then came the theatrical run a few months back where the movie just got CREAMED critically. Then the impossible happened. Morbius became a meme on the internet, and Sony believed that the “cult” meme following was enough incentive for them to re-release the film back into theaters. Only for it to make a hilarious $85,000 on the re-release. So yes, Morbius is more akin to Venom: Let their be Carnage than Spiderman: No Way Home.

The one thing that really frustrates me is that the pacing is all over the place, with most of the hinted at story line from the trailer being rammed down our throats in the opening 30 minutes. We’re introduced to Dr. Michael Morbius (Jared Leto), a man with a rare blood disease that keeps him weak and frail. However, he has been searching his whole life for a cure, and believes he has the answer in the DNA of vampire bats. Capturing a whole bunch from Costa Rica, the good Doctor slowly incorporates the bat DNA into a serum, and finally has the breakthrough he needs. Due to the ethics and legality of the situation Morbius has to use himself as a test subject and with the help of his partner, Dr. Martine Bancroft (Adria Arjona), injects himself with the serum.

You don’t even have to guess what happens next. Morbius acquires strength and stability due to the bat serum, but a huge price. Not only does he gain speed, strength, and a myriad of vampire bat like abilities, but it is all contingent on the need to feed on human blood like the mythical vampires. As such he is a sort of “living vampire”. Trying to satiate himself on his own invention of synthetic blood that he devised years ago, Morbius works at trying to reverse his curse. But a hiccup arrives in the form of his best friend Milo (Matt Smith, who is so heavily telegraphed as the eventual villain from the first few moments of the movie), who suffers from the same blood condition and DESPERATELY wants the same cure from death that Michael has given himself.

Morbius is a giant cluster bomb of horrible pacing, CGI that looks like it came from the early 2000s, and a storyline that literally side lines Jared Harris and Tyrese Gibson (who plays the obligatory cop). It’s silly, goofy, and while it tries to use Spiderman: No Way Home as a way to tie itself into the Marvel regular Universe, I just don’t see a sequel happening. Not after it bombing so badly at the box office. However, I guiltily admit that I actually kind of like the film. It’s better than Venom: Let Their Be Carnage for sure, and the internet memes that BLEW UP afterwards has solidified the film in a sort of weird cult “so awful that it’s awfully entertaining” status. It’s hammy, cheesy, but ultimately not the train wreck that it was critically lambasted for being in the theaters. It’s just not top tier super hero stuff.

The Digitally shot film was captured at 6.5K and then transferred to a native 4K master for home video, and then scaled down to 1080p for the Blu-ray. All in all, this is a great looking Blu-ray encode. The film’s use of low light and heavy teal grading is really impressive to view. Even in high speed action sequences you can see everything clearly. The film seems a bit bright in the daylight sequences, and there is SOME banding and light crush in the underground cave shots. However, those issues are minor midst an otherwise stellar video encode (I did notice that the CGI is a bit low budget and tends to make a few scenes look soft around the edges).

There are very few things that I can quibble about with Sony Blu-rays, but one of the ones that just rubs my the wrong way is their propensity for keeping the Atmos mix ONLY on the 4K UHD disc, and relegating a 5.1 DTS-HD MA track for the Blu-ray. That quibble aside, the 5.1 mix is simply superb. It’s a top notch super hero track from beginning to end, with tons of high flying action that make copious use of the surrounds. Bass is abundant and powerful, especially when Milo and Morbius square off, or when Morbius is using his echo location abilities. Dialog is crisp and clear as usual, and the only “knock” I can think of it is that it is slightly inferior to the superb Atmos track.

While I would have loved a top tier super hero movie, Morbius is more akin to your typical Sony super hero movie fare (Spiderman not withstanding). It’s goofy, shot on a super low budget (the CGI is evidence of that) and Jared Leto doesn’t deserve the heat he got for his Morbius portrayal (although Matt Smith is so gloriously hammy that it’s awe inspiring). The Blu-ray disc is quite impressive technically speaking, and while this isn’t exactly high brow art, it was a fun hammy watch.