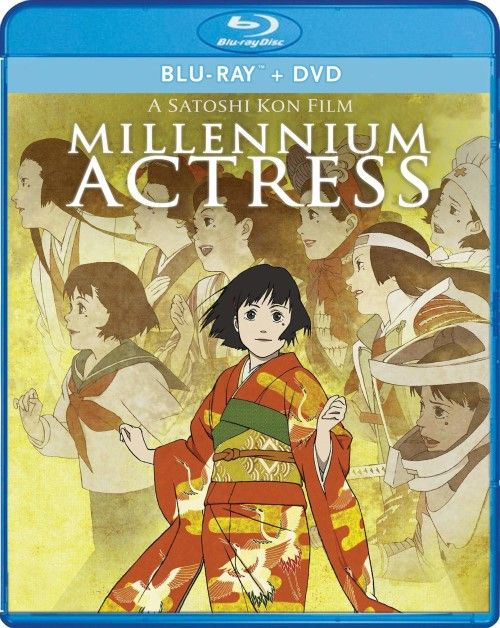 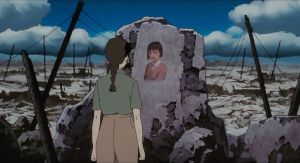 Movie
Millennium Actress was one of the few anime films around the turn of the century that I missed theatrically. Back then I was into much more action oriented stuff, or comedic anime variants to choose a sweeping drama like Millennium, but 5 or 6 years later I noticed my tastes changing and I picked up the DVD for $2 at a pawn shop one day and was instantly hooked. I would label it as one of THE best non Miyazaki anime films out there, telling a sweeping, yet totally intimate, look at a person’s life as told through their aging eyes. It’s powerful, impressively animated, and yet short enough to never feel like it over stays its welcome or becomes over bloated with unnecessary side plots. Shout Factory has gone back and pulled a 4K scan for this release, making it head and shoulders over my old DVD, and included quite a few brand new interviews with the American voice actors from the dub to make this a really impressive release.

The story revolves around an interview of a famous Japanese actress named Chiyoko Fujiwara (played by three different people depending on her age in the individual story at hand) who is being interviewed by a star struck journalist after the film studio that housed her cinematic legacy is being demolished. Chiyoko has long been out of the spotlight as a retired actress, but TV news reporter Genya Tachibana is determined to immortalize her 70 year acting career as best he can when he hears about the legendary studio’s demise.

As the story unfolds, Genya and his goofy cameraman become absorbed in the stories that Chiyoko weaves, as the actress unveils the highlights and important features to her over her long career. The narrative is a unique one, as we get to see Chiyoko’s stories play out on screen, with Genya and Tachinbana IN the frame filming as if they were there at the time. It’s a nuanced and incredibly effective way to show just how enraptured Genya and his cameraman are with her stories, and adds a distinctly intimate flair to the story.

Each of the stories are sweet, exciting, and about as varied as one could get from this type of narrative. I have rarely forgotten to look at the clock once during a movie (a bad habit of mine, as I figure out where I am in a film), but I honestly never once looked at the run time, actually feeling kind of disappointed that the 87 minute film came to its conclusion as quickly as it did. The animation style is superb, with lovingly crafted hand drawn lines, and the integration of differing styles of art to go along with different aspects of Chiyoko’s life makes for a spectacularly vivid presentation.

Millennium Actress is a truly breathtaking work of art, and I really REALLY am kicking myself for not seeing the U.S. theatrical run some 18 years ago. I can’t recommend it enough and it is still one of the best “first time” experiences that I’ve ever had with an anime film. Yes, it really is that good, and yes, you should watch it. The film is only at a PG level for rating, and can be seen by people of all ages, although adults will get the most out of the film simply due to how raw and realistic the stories are, and the more mature folks out there will get more out of the stories. 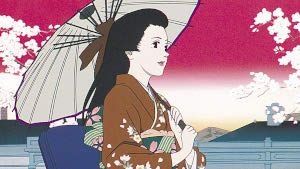 Even though the animation style is not exactly akin to modern styles, the 18 year old film looks amazing on Blu-ray. The hand drawn animation style is lovingly rendered, with clean lines and fantastic colors throughout. The movie literally has an entire rainbow array of colors as the story shifts from one anecdote to the next, with styles changing ever so slightly, and color and color saturation adjusting to the tale at hand. Supposedly this was all coming from a brand new 4K scan thanks to Elven Arts and Shout Factory, and the new scan is leagues better than my old DVD that I have stuck on my Anime shelf. There’s a few times I noticed some jaggies around the edge of characters, but upon pausing on my 120 inch screen and going frame by frame, it appears to the rough edges of the line art vs. any digital artifacting. All in all, a great looking disc. 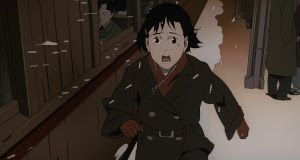 Given both a Japanese original and English dub in DTS-HD MA 5.1, it’s pretty much down to personal preference here as both tracks are sonically nearly identical. Even though not a massively action filled track, this is one of the most robust and exciting anime audio mixes that I’ve heard recently. Delightfully airy and nimble, background sounds dance from one side of the room to another, filling in the gaps from the already rocking front end of the sound stage. The track is filled with roaring space launches, screaming crowds, quiet moments of somber silence, and the pin point precise ambient noises of a Japanese garden. LFE is tight and powerful when needed, adding weight to the earthquakes going on throughout the interview, as well as various action oriented bits inside the individual tales. Dialog is clean and clear, and the dynamic range is startlingly wide for the genre. A+ across the board! 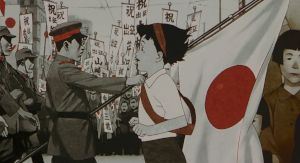 Millennium Actress is probably one of the best non Miyazaki titles ever made, and it’s a true classic for a very good reason. The storytelling is superb, the animation breathtaking, and everything about this new 4K scanned release screams quality. The interviews from Shout Factory are in depth and well done, although I would have liked to have seen some commentaries or interviews from the original Japanese cast to flesh it out, I fully understand that it would have been really hard to get for a small studio like Shout. This is a fun release for any anime fan and a huge improvement, technically speaking, over the old DVD release that’s nearly 20 years old.

Recommendation: Must Buy for Anime Fans