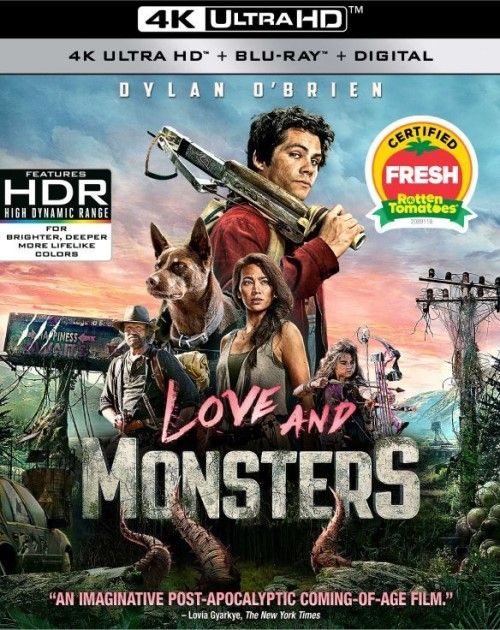 Movie
With the influx of bleak post apocalyptic futures in films/shows like The Road, The Walking Dead, Take Shelter and the like, it’s refreshing to watch a post apocalyptic flick that doesn’t take itself too seriously. Films like Warm Bodiesi and Zombieland (as well as it’s sequel) have made a niche for themselves in turning the PA genre on it’s ear with some well deserved humor and light heartedness. While Love and Monsters may not be the original Zombieland quality of production, but it skates a thin line between zany humor and seriousness without ever copying any of the films that came before it. I got more of a wry satire vibe from the film even though it was obviously meant to be straight up slapstick at times, and was pleasantly surprised by the feel good nature of the story. It works, though it’s a bit cramped and bland at times for it’s own good.

After 2020 (and the start of 2021) it almost seems like a relief to find out that the world has ended in Love and Monsters. A giant asteroid was hurtling towards Earth (isn’t it always?) and the only way we knew how to deal the rock was to blow it up. The only downside was all the chemicals and radiation from all of the missiles we used ended up irradiating the Earth, and causing the mutation of cold blooded animals. Mutations that turned slugs, bugs, and other cold blooded animals into gigantic monstrosities, effectively turning humanity from the top of the food chain right into easy prey. 95% of humanity was wiped out in a single year, and the rest of the surviving humans went underground into colonies.

In one of these colonies we meet young Joel (Dylan O’Brien), a 24 year old kid who has been in hiding since he was 17 and witnessed the fall of the world. He desperately wants to fit into the rough and motley crew that operate his colony, but he suffers from a severe case of paralysis and is more of a liability than an asset to the crew. Relegated to cooking and cleaning up Joel is the typical wallflower of the group, but is finally given his chance to shine when his old girlfriend in another colony goes radio silent, forcing him to come out of his shell and traverse the 85 mile journey with nothing but a makeshift crossbow and his fortitude.

Let me lead this portion with a simple reminder that Love and Monsters is not to be taken too seriously. It’s not attempting to say something deep and insightful outside of the fact that humanity is about human CONNECTION and not just our will for survival. The humor is lighthearted and energetic, but never too over the top (coughZombieland: Double Tapcough) and the action is fun without being gory or too minimalistic. This is a story about a boy and his dog (named Boy, who steals every scene he’s in) and his attempt to meet up with his true love. There’s lots of CGI monsters, a few hand grenades (always a good addition) and plenty of corny dialog, but in the end this is just meant to be pulp entertainment with lots of explosions and one liners. I really enjoyed the simplistic nature of the film and appreciated that it never tried to be anything that it wasn’t. The only real major theme that could be considered something deeper to focus on was the main theme of connecting to humanity, but even that was more of a glossy coating to this silly adventure.

Dylan O’Brien is really the main focus of the film and he does excellent as the lead. He’s not nearly as dramatic as his Maze Runner films, but he carries the film with a sense of gusto as he endears his clutzy self to the audience. The rest of the characters are generally just background (well, outside of the dog Boy), but they all pull off their roles quite well. Michael Rooker doesn’t even have to TRY to pull off the craggy old man in a post apocalyptic world, but fills the cliched role nicely enough.

Rated PG-13 for action/violence, language and some suggestive material

The 1080p Blu-ray is an excellent disc, and while the 4K UHD never is AS jaw dropping an upgrade as I would have liked, it does bring forth several subtle upgrades that makes it the superior disc rather handily. Little nuances such as cleaner textures, finer details in the faces, and backgrounds showing better colors is the main increases in quality, although some mild clarity boosts are present as well. The heavily CGI film (seriously, 99% of the movie was CGI) still looks great, but the use of HDR really amplifies all of the vivid colors as Joel makes his way across the surface world. The bright greens of the surrounding foliage is startling in it’s saturation level, and the bright oranges and purples of a frog are just as amazing. Some of the CGI looks a BIIIIIT fake (too much of a good thing I guess), but overall the film is very clean and vibrant. My only complaint was since the film was mastered at 2K and there was SO much post processing in the visual effects, the increases in sharpness and clarity aren’t night and day.

One area that Love and Monsters REALLY shines in is the audio department. The 7.1 DTS-HD MA track (which is the same track found on the Blu-ray) is a pulse pounding mix that really delivers on all fronts. The opening scenes of the movie show a claustrophobic “underground” scenario, complete with pounding bass and tight confines in the sound design. Once the film opens up to the world up above the sound design shifts to a more open and nimble sound. The surrounds get a great workout as the various monsters interact with Joel, and the score flows effortlessly around the listening position. Vocals are always crisp and cleanly located up front, and the low end section of the track is absolutely punishing. More than once I watched the clip lights on my subs flicker on for a split second as a monster attacked, only for it to go away and come back again with the same ferocity. It’s a great mix, and while I would have loved an Atmos track, this is in no way something to poo poo. Absolutely flawless use of “old” technology.

• Deleted Scenes
• Bottom of the Food Chain: The Cast of Love and Monsters
• It's a Monster's World: Creating a Post-Apocalyptic Landscape

As I said above, Love and Monsters is not meant to be dissected and thought of as a deep film, but neither is it slapstick and COMPLETELY goof like Zombieland. Instead it’s a fairly light hearted family affair that leans more towards Warm Bodies than it does Zombieland even though both are the leaders of the “Post Apocalyptic Comedy” sub genre. The film is fun enough for a good watch, and the 4K UHD disc a solid enough upgrade over the already excellent Blu-ray. Worth checking out.

Got it in yesterday... looking forward to watching it. I was wondering if you were going to review it... thanks!

Thanks for the review. I too will check it out.

Absolute gem of a movie and as Michael states, the audio track kicks . Sadly this did virtually no business at the theaters since the vast majority of them were shut down, but I think it could have done $100+ million in a "normal year," because the word of mouth on the movie would have been very positive. It's just a fun way to spend two hours.

I agree with your review. I enjoyed the film. A fun watch.

I'm in on this film... looking forward to it!

We enjoyed it very much, but I'm shocked at the 92% Fresh rating on Rotten Tomatoes. It was fun, sounded great, but it doesn't seem like a critic's darling type of film to garner that kind of rating.

Ehhh... it was okay for me. I won't watch it a second time though. What I would probably classify as a rental.

thrillcat said:
We enjoyed it very much, but I'm shocked at the 92% Fresh rating on Rotten Tomatoes. It was fun, sounded great, but it doesn't seem like a critic's darling type of film to garner that kind of rating.
Click to expand...