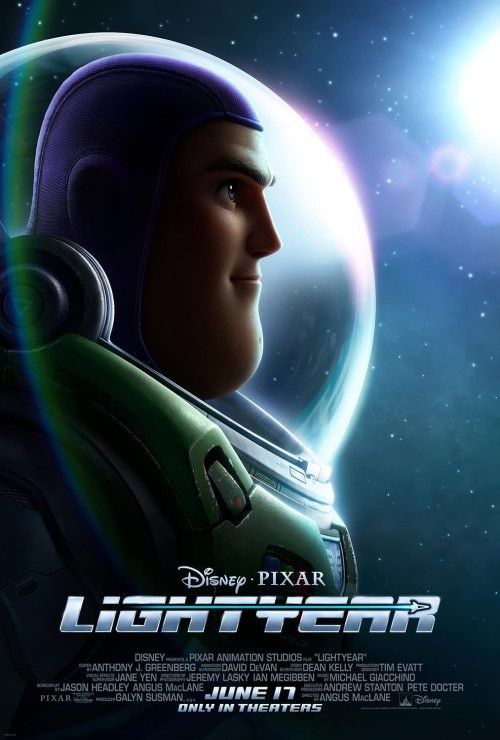 Movie
I didn’t forsee the day that a Toy Story IP film would be met with controversy, a failed box office attempt, and a generally lukewarm reception all the way around. But hey, that day has come. While Lightyear is by no means a bad film, it suffered some serious blows before the movie even came out. First fans were let down that Chris Evans was replacing Tim Allen as the voice of Buzz in the animated film (kinda makes sense as this was the movie Andy saw IN Toy Story, not the toy itself, so it could be construed as two different characters. But personally I think it did hamper audience enjoyment a bit), there there was the hullabaloo when it was announced that there was going to be a same sex relationship in a PG rated kids movie (and to be fair, like MOST things that get ranted about as “woke” by the internet, it was a fleeting scene that really wasn’t as in your face as people were making it out to be). Then came the box office results. Lightyear had a $200 million BASE budget not counting advertisement, other countries taking part of the cut etc, and a GLOBAL sweep of only $222.5 million. Then came Chris Evans going on national TV and telling people who disagreed with the inclusion of the same sex relationship stupid (which kinda went over like a lead balloon like you would expect with the more conservative faction of the viewing audience). So naturally I was a bit hesitant going into this viewing.

The story is supposed to be the movie that Andy watches in Toy Story that makes him want a Buzz Lightyear toy, and as such there is no real reference to Toy Story in any way. The film starts out with Buzz (Chris Evans) and his partner Alisha (Uzo Aduba) going on a routine mission from Star Command that ends up with Buzz accidentally crashing their ship and marooning himself and every member of the crew on this uninhabited planet of doom and sentient vines. Attempt after attempt to creating a working light speed drive fails, but one side effect of the light speed travel is that every time Buzz gets CLOSE to light speed, time dilation slows down. Meaning that while it’s only minutes for him, it’s years for everyone else on the planet. Time and time he fails, and time and time again Buzz watches his crew mates grow old and die around him. Just when he thinks that it’s all over, his robot Sox (Peter Sohn) figures out the final bit in the equation that has been keeping hyper space outside of his grasp.

The only thing is, that this last trip is decades in the future and a race of monstrous robots is attacking what is left of the base, leaving Buzz and Alisha’s granddaughter Izzy (Keke Palmer), along with a pair of misfit recruits, to try and complete the mission. Naturally the isotope that Buzz creates to complete light speed and reverse through time gets stolen by the evil Zurg robots, and it’s up to them to board the Zurg ship, take back the isotope, and complete the mission without getting killed. 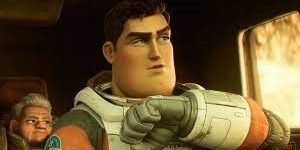 The first half of the movie I felt that this wasn’t a bad movie at all. It was kind of unnecessary, but still a fun movie. But then the 2nd half of the film came around and we got to find out who Zurg really was and the movie just started falling apart. Rushed, cheesy, and filled with the classic “rag tag team of social misfits actually learns to trust each other and accomplish great things” motifes, the movie just sputters to the finish line. Not to mention the big twist with Zurg is kind of a huge let down for any of us who watched the Toy Story films or the animated Buzz Lightyear of Star Command show. IT literally saps all the life out of Zurg and turns him into a guy in a metal suit instead of the evil Emperor Zurg that he was built up to be in the show and the movies themselves. It really feels as if the writers had zero grasp of the lore and canon of the universe and instead just made something loosely resembling the world of Buzz Lightyear instead of expounding upon said lore.

Personally, I don’t find the movie to be the train wreck people made it out to be, but it really wasn’t something to write home about either. Lots of people blamed it on the “go woke, go broke” cliché, but I think it was a little more simple than that. This was just a movie that no one was really clamoring for. We had an entire back story to Buzz Lightyear in Buzz Lightyear of Star Command, and the last Toy Story movie was starting to wear thin on the franchise as well. Couple that with the fact that so many people consider Tim Allen to BE Buzz Lightyear, and it’s not hard to see why this fizzled and sputtered at the box office. Sure, I’m certain that SOME people stayed home because of the politics and hubbub online, but mostly it was due to bad word of mouth, and the fact that no one really was wanting to go see it to begin with. Which is really the film’s biggest fault. It can’t seem to justify its existence in the Buzz / Toy Story universe. It’s a perfectly serviceable move in it’s own right, and wouldn’t be seen as THAT bad if it didn’t just do such a mediocre job of retconning Buzz Lightyear lore, and tell a story that was as generic as they come in animated terms.

I always state this before every digital video/audio review, but I’m not going to assign a star rating to the video simply because this was a streaming digital copy that Disney provided me to review, and a person’s bitrate and internet speed will largely determine how good the quality is. However, from my 4K copy, this looks quite impressive as one would expect from Pixar. Good digital prettiness straight from said digital tap. Colors are bright and richly saturated, and the Dolby Vision REALLY makes them pop. I turned the film down to HDX 1080p on another TV and the difference with the Dolby Vision and HDR turned off was startling. The colors really pop with the DV and the darkness in space is amazing.

I can’t comment on the Atmos track that’s coming up on the 4K UHD disc, but the streaming Atmos track really surprised me. With how Disney/Pixar is with their Atmos tracks I was fully expecting a mewling Atmouse track to simper through. Instead it’s a rather loud and punchy track with LOTS of LFE thrown around. Explosions and Zurg footsteps really pound away, and the surrounds get used quite heavily with all of the action. I did notice that this needed the obligatory Disney volume boost, but once the volume was attenuated to the proper levels the power and authority of the action/adventure flick really shines.

Honestly, Lightyear is not a horrible movie, it’s just a mediocre one. There’s a lot of fun with explosions, pretty colors, standard animated movie story tropes, and a GORGEOUS looking image with some amazing audio. If you can look past the fact that it really doesn’t seem like a massive Pixar production or have that much to do with what we know of Buzz Lightyear, it works as a decent movie by itself. Take from that what you will, but it was fun as a solid enough rental in my personal opinion.

Thanks for the review. While I ran to the theater for all the Toy Story movies, this one, I didn't.. Just didn't seem necessary.. Like you, I heard mixed reviews, mostly bad thou.. I will eventually check it out once it is available for streaming..

Got my digital review as well, which isn't as good as getting a 4K disc to review (another reason to be mad at Disney). Regardless, I'll have to get up the nerve to watch this because I fall into the camp of "was this really necessary" and "where is Tim Allen?" Nice review Michael.
Last edited by a moderator: Aug 4, 2022

Epoxy1 said:
Got my digital review as well, which isn't as good as getting a 4K disc to review (another reason to be mad at Disney). Regardless, I'll have to get up the nerve to watch this because I fall into the camp of "was this really necessary" and "where is Tim Allen?" Nice review Michael.
Click to expand...

I saw it this weekend on Disney+ with the family and enjoyed it. I agree it was not a train wreck. Likely got slammed because there is no Tim Allen and people lost interest but for the kiddos there is a lot to love I am sure. Thanks for the review.
You must log in or register to reply here.
Share:
Facebook Twitter Reddit Pinterest Tumblr WhatsApp Email Link