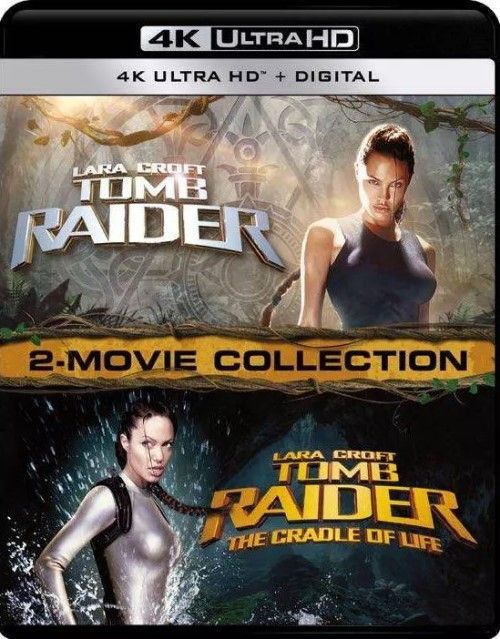 Movie
Well, kind of like Mission Impossible, Lara Croft: Tomb Raider (good night, it's been almost 20 years?) was one of those early paramount releases that was ABYSMAL. Like absolutely painful to watch on Blu-ray. Those of us who wanted a better version were forced to import the German Blu-ray release back in the day, and then we got the new 4K UHD discs some 4 years back (almost to the day actually). Well, as with Mission Impossible, Paramount released a new remastered Blu-ray today (which we don't have to review, but by all accounts is a HUGE step up from the old Blu-ray) and also decided to re-release a 2 Pack of the two 4K UHDs of both Tomb Raider films which are just a repackaging of 2 4K UHD discs from 2017 sans Blu-ray combo discs (still including the digital copy). As such, I'll be linking to the full reviews that I did back in 2017 for a full synopsis of both films

Rated PG-13 for action violence and some sensuality (both films)

For a full audio review, you can click below on the link

Tomb Raider: The Cradle of Life

Both Tomb Raider films are guilty pleasure flicks for sure. They were Angelina Jolie action vehicles back in a day when Super hero and video game movies weren't exactly very popular (outside of the just introduced Resident Evil franchise). This 2 film collection pretty much clones the 4K UHD discs from the individual releases and gets rid of the Blu-ray halves of the combo pack (and in doing so gets rid of all special features being that said features are all the legacy features found ON the Blu-ray discs, except for a lone commentary track on the first film). Both discs are still very nice 4K UHD upgrades, but I'd say this set is for those of us who have the Blu-rays already or just want a cheaper alternative way to get the 4K UHD discs without the obnoxious new cover art (the 4K UHD cover art for the individuals was pretty atrocious) without all the fluff and extras.

Thanks for the review. I remember seeing this long time ago. I don't remember much thou.. Will have to revisit it.