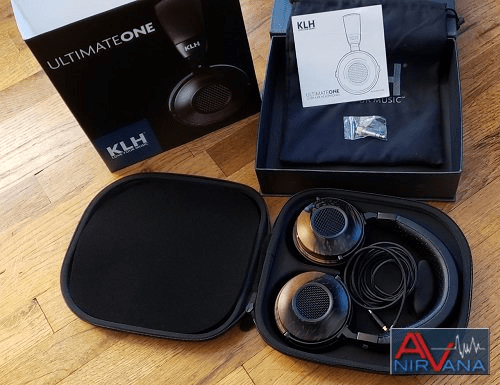 Introduction
The KLH name has been resurrected under new leadership, and they have been turning out some fantastic offerings in the loudspeaker realm. This time, though, the company has taken aim at the midrange headphone market. Beats is squarely in its sights with this offering, as the Ultimate One's MTV roll out amply demonstrated. With beautiful Ebony wood-grain cups and lambskin over memory foam earpads, it seems like KLH is pushing just a bit higher than the midrange market, targeting the luxury segment. The One's technology offerings are in line with its comfort, with 50mm pure Beryllium drivers delivering a significant value proposition.


Fitting
The Ultimate One's fit matches its quality materials, making the headphone feel like a luxury vehicle for the head. I found its ear cup pressure to be just a bit much, something with 'phones that's easily fixed by slightly bending the headband or storing them spread out around a wide object, like a packaging box. As these are not my headphones, I didn't attempt any major adjustments, letting it ride as found out of box.

The Ultimate One ships with a single silver-litz cable that attaches to its left ear cup, a fairly standard arrangement for headphones with a detachable cable.


Listening Impressions
- Korn's "Y'all Want a Single" had enhanced boom and tinkle with a solid bass that could almost be felt in the toes and an added sparkle up top in the middle-highs. Diving into "Another Brick in the Wall, Part 1,2,3," the bass was driving, almost prompting toe-tapping. The highs were mellow and the mid-range revealed itself as highly detailed.

-The Aldo Nova's "Fantasy" electronic intro gave me the sonic envelopment one would expect from open-backed headphones, confirmed by the solo guitar L/R pans at the 3:16 minute mark. The rhythm keyboards, typically resigned to the background, were brought forward through the Ultimate One's precise midrange articulation.

- Impressed by its massive bass capabilities, I fired up Bassotronic's "Bass, I Love You" to put the One to the test. Fully up to the task, I was treated to a nice rolling synth-bass that dove deep as it faded away from my ears before rolling back for a return and repeat. The toddler's "I love you!" and other spoken parts took on a character I'd not heard before, precise middle-high annunciation lending a nice edge to their presence. Jumping into "Sub Bass Excursion," I was given a nice head massage by the rising and falling bassline. Lots of fun!

- Harry Mancini's "Pink Panther Theme" had a nice, full upright bass line, but the One's accentuate this region and the opening sax was colored just a bit. All was well again when the brass kicked in, as were the upper-register flutes, above and immune to the slight rise in bass response, complimented by the abilities of the beryllium driver to communicate the midrange in that special way it does. An extremely dynamic recording, the One's had no problem hitting levels that had me minding the volume control as the song hit full-swing.

- I wrapped up the One's audition with a first listen to TOOL's Fear Inoculum, what a fantastic way to get introduced to the new album. The incidental, right-panned digital "beep" in "Chocolate Chip Trip" has a precise and addicting nature, brought forth by the One's ability to delineate it. Micro and macro-dynamics were also preserved, which is a must when listening to TOOL. I never felt the need to turn the volume up or down during the entire album. The previously-mentioned fit comfort-level by the time "7empest" kicked in was taking a hit on my dome. I had to remove them and take a small break before finishing. Upon my return, the Ones welcomed me back with the same, refreshing sonic bath.

I first heard a couple of Fear tracks when I caught the band live in concert. The studio album introduction via the KLH Ultimate One was as memorable as the live concert experience. The fact that anyone can experience this for $300 plus a smartphone and a quality streaming service is a huge value proposition, indeed.

Conclusion
I came to appreciate the sound signature of the KLH Ultmate One. It carries a nice warm presence; there's nothing cold or sterile about its delivery. Midrange articulation was a huge standout for me, with the mid-band not at all intimidated or repressed by slight rises at frequency response extremes, allowing the midrange to carve out its own niche in the sound field with a quality not typically found in this price range. The Ultimate One should have no problem carving out a similar niche in headphone enthusiasts' hearts.

Other Speakers or Equipment
Sonos Play 1, Sonos One

Those look fantastic, but seems a bit behind the curve to target beats as a competitor while (KLH) still using a wire.

Will S said:
Those look fantastic, but seems a bit behind the curve to target beats as a competitor while (KLH) still using a wire.
Click to expand...

These are strictly high-fidelity 'phones, so the absence of Bluetooth is intentional. Personally, I prefer my ear gear to have no inline controls or Bluetooth-capability. Just a nice, clean delivery of the signal, unimpeded.
You must log in or register to reply here.
Share:
Facebook Twitter Reddit Pinterest Tumblr WhatsApp Email Link