Jumanji: The Next Level - Blu-ray Review

Jumanji: The Next Level 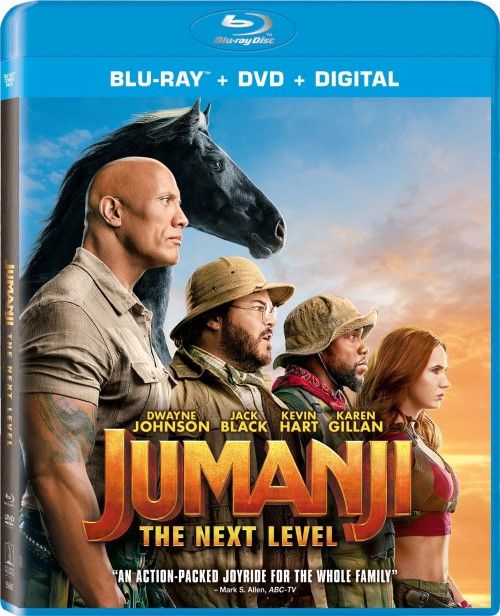 Movie
I don’t anyone thought that the 2017 Jumanji: Welcome to the Jungle would actually be a good movie. Especially being a remake/sequel/kindawhateveritis of an iconic classic from Robin Williams hey day of the 1990s. However, it managed to not only be passable, but an actual GOOD movie at that! It paid enough homage to the first one to be polite, but then modernized it and had whole lot of fun with the modern concept of video games. Not to mention a cast that worked really really well together. That being said, Jumanji: The Next Level feels exactly like what the title says. A next level, or more accurately, a DLC pack from the 2017 film. The movie rehashes the 2017 film and changes things up only ever so slightly by changing the Avatars of the children around just a tad. It’s a bit superfluous, but it also feels like a direct continuation of the 2017 and is very comfortable in it’s simplicity.

A slight spoiler for Welcome to the Jungle. Last time we left our 4 heroes, they had smashed the evil Jumanji video game after having defeated the game’s purpose. Now it’s a couple years later and Martha (Morgan Turner), Bethany (Madison Iseman), Fridge (Ser’Darius Blain) and Spencer (Alex Wolff) have gone off to college. Only thing is, Spencer and Martha have drifted apart and are kind of on the outs, and Spencer has even drifted apart from the rest of the group as well. A winter holiday brings all four friends home, leaving Spencer at home with his grandfather Eddie (Danny DeVito). Feeling dejected and lonely at life, Spencer pulls out something no one new he actually had. The remnants of the video game Jumanji. When Martha, Fridge and Bethany come over to check on Spencer they find the broken video game in his basement and no Spencer to be seen.

Realizing that he went in alone, the rest of the friends decide to go in after him. However, the broken nature of the video game means that things don’t go as planned. Instead of getting to pick their video game characters the video game pulls them in and randomly assigns the Oberon (Jack Black), Ruby (Karen Gillan), Bravestone (Dwayne Johnson) and Mouse (Kevin Hart) to the participants. The thing is, the game’s brokenness does more to alter the characters than just randomly assign them to participants. Instead it pulls Spencer’s grandfather and his grandfather’s old business partner Milo (Danny Glover) into the game as well, leaving Bethany on the outside. Inside the magical game and with time running out, the 2 old men and two children have to risk their video game lives as well as real lives to find Spencer and complete the game without losing their lives in the process.

Jumanji: The Next Level really DOES feel like the next level from Welcome to the Jungle. Instead of trying out something new and exciting, the story just continues on, with more traps, more pitfalls, and more stupid blunders that end some of their 3 lives in the game. The big “twist” that happens in the story is simply the main avatars having to emote like different people this time around. Which in and of itself is pretty hilarious. Kevin Hart tying to imitate Danny Glover’s mannerisms is hilarious, and the Rock just hams it up trying to play Danny DeVito (unsuccessfully at times I might add). The script is pretty much the same as the first game, except new characters (Spencer is actually played by Awkwafina in the game) and we get to learn about Milo and Eddie’s back story. Otherwise, rinse and repeat adventures from the first film.

Rated PG-13 for adventure action, suggestive content and some language

The Blu-ray is a really REALLY good, even if it’s not completely perfect. The digitally shot film is gorgeous to the naked eye, with sharp details and stunning colors. The jungle greens and dusty deserts of Jumanji are jaw dropping, and shadow detail is superb. There are several points in the film (such as the town where they meet up with Spencer) where darkness and shadows reign supreme, and while I saw some black crush and a few grain spikes, the Blu-ray’s 1080p resolution holds up well. Fine detailing on clothing is exceptional, and the (mostly) digital backgrounds hold up better than expected. There is a TON of CGI in the film, and while you can pick out some of it, there’s a lot that blends really well with the live action stuff.

The 5.1 DTS-HD MA track that the Blu-ray is “stuck” with (while the 4K UHD disc sports the DTS:X track) is certainly very serviceable, and even great on occasion, even though it does not stand up fully against the more dynamic and powerful DTS:X next gen track. The film’s action sequences are deep and throbbing with bass, while the surrounds get a wild workout throughout. The LFE is a softer than I had previous hoped, and actually may be a tad bit lighter than the DTS:X companion track found on the 4K disc. It’s a good overall experience and certainly is a very light and active mix for sure.

• Gag Reel
• "Rhys Darby Wants To Jingle": How do you top Jack Black and Nick Jonas's unforgettable theme song for the first one? Everyone's favorite Non Player Character, Rhys Darby is ready to take it to the next, next level.
• "Body Swapping: Snapping Into Character": "In the latest Jumanji adventure, the avatar roles are turned on their heads with new characters and hilarious performances."
• "Back Together: Reuniting the Cast": Dwayne Johnson, Kevin Hart, Karen Gillan and Jack Black are back and better than ever as they share their excitement to reunite.
• "Level Up: Making Jumanji: The Next Level": From breathtaking scenery, wild adventure, new characters and more- go behind the scenes with the cast and crew as they take Jumanji to the Next Level.
• "Scene Breakdown: Ostrich Chase": Jump in your dune buggy and go inside the epic ostrich chase scene as the filmmakers and visual effects team breakdown the creation of this memorable scene.
• "Scene Breakdown: Mandrill Bridges": Moving rope bridges, giant mandrills and incredible stunt work make the mandrills attack one of the most adrenaline pack parts of this film. In this scene breakdown, see how they pulled it off.
• "Awkwafina Cat Burglar": To prepare for her roles as pickpocket, Ming Fleetwood, superstar Awkwafina got a little too method behind the scenes.
• "NPC Confessions: Jurgen The Brutal": Being the bad guy isn't all glory. Jurgen The Brutal gets real in this candid confessional.
• "Grow Up:" Danny DeVito and Danny Glover help Dwayne Johnson and Kevin Hart get in touch with their inner grumpy old men.
• "Telenovela": Kevin Hart gets lost in translation in this melodramatic promo.
• "VFX Pre-Vis: Zeppelin Battle": Compare the detail of the visual effects pre visualization reel and the final picture breakdown of the thrilling Zeppelin battle.
• "VFX Pre-Vis: Ostrich Chase": Track the progression from pre-visualization to finished scene in a side by side comparison of the ostrich chase.
• AR GAME: The 4K UHD, Blu-ray and DVD include a collectible map that is fully interactive, employing Augmented Reality to bring Jumanji to life through a smart phone, allowing users to create their own 8-bit Avatar, navigate a series of mini games and much more!

This sequel to a remake/sequel is a perfectly serviceable film, especially if you enjoyed the 2017 remake. It just really isn’t up to the first (well, the 2017 first) film’s intensity or scope. It feels more like a video game DLC or expansion pack more than anything. Everyone involved is definitely having fun, but the enthusiasm and excitement from the unexpectedly great 2017 film is just not there. The Blu-ray is stunning though, with great video and sound, and a decent smattering of extras as well. While I may grumble about it not living up to the last film, but The Next Level is still decently entertaining as a dumb family adventure film. Worth checking out.

Thanks for the review. I will most likely check it out on a free day when it is on amazon prime/netflix.