It's a Wonderful Life: Steelbook Edition 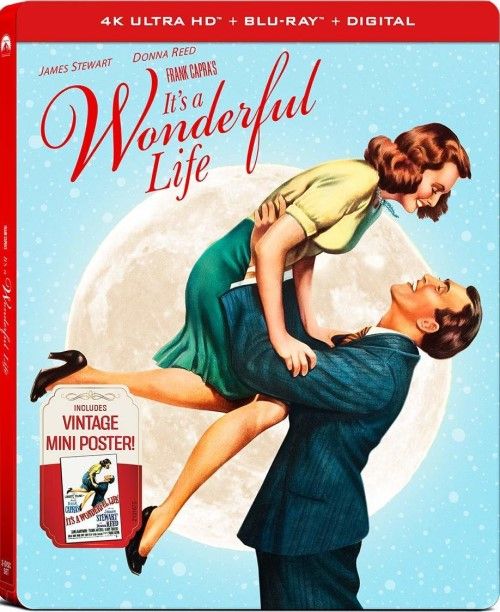 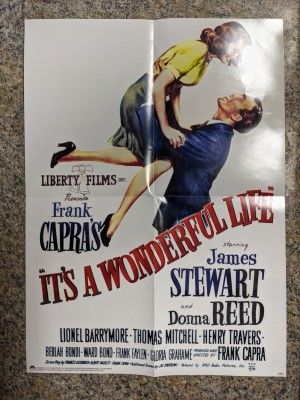 Movie
Once again Paramount gears up for another steelbook re-release of a classic film, and this time it’s last years 4K UHD release of It’s a Wonderful Life. Like usual, the discs are identical between releases with the only difference being the snazzy new cover art and steelbook casing. Well, that and a vintage fold out poster. Aside from those differences this is a clone of the 2019 4K UHD release. The cover art for this is rather impressive though, with a nice “retro” look to it, plus the fold out poster is really appealing for us poster nerds (I have so many film posters that I have to press them in sleeves and keep them stacked in my home theater room and rotate them into frames every 6 months to a year...yes yes I know, I’m weird). As such, the rest of this review (outside of the final summary at the end) will be identical to my 2019 review of the 4K UHD set.

There’s very few films out there that gets this old cynical reviewer to cry every time he watches it. I may snuffle at a few patriotic scenes in a few films, or I might even shed a tear at a powerful death scene in a movie, but there are VERY VERY few films that I actually prefer to watch alone because I know I’ll be the idiot in the corner bawling his eyes out, and of course it would have to be Frank Capra to do it at that. Capra has long since been a legend of film making genius, putting out such hits as It Happened One Night, Mr. Deeds Goes to Town, Mr. Smith Goes to Washington, Arsenic and Old Lace, You Can’t Take it With You and a myriad of other masterpieces that I’ve loved and adored ever since I was a child. It’s a Wonderful Life is one of those films that I gave up watching at Christmas years ago simply because of how saturated it had become in popular culture. Seriously, how many times can you turn on Cable TV around the holidays and NOT see this film being played? After a while you get sick of it and start to rue the day the movie was filmed! Buuuuut, with age comes a new perspective on things. Back when I was a young boy and teenager I thought it was a fun family film that we’d watch every year, but after spending nearly 8 years never watching it again due to over saturation I have a new perspective on the movie. Capra’s masterpiece may be over played every year during the holidays but it is a profoundly powerful bit of film making that highlights just what matters in our life, and what makes us rich. It’s never about the money, it’s never about the fame, and it’s never about what you have. It’s very simply about being content with what you have, and the people you share it with.

George Bailey (Jimmy Stewart) is on the verge of collapse. He’s on the verge of committing suicide, and due to the host of prayers sent up there way, heaven is sending an angel initiate named Clarence (Henry Travers) to come down and stop George (and in doing so will earn his wings). But before he can go down and intervene in the man’s life, Clarence has to learn what made George come to this place in his life this Christmas Eve. George is portrayed from a young age as a fine standing young man. He’s saved his brother’s life as a kid, moved up in the world, and even married the lovely young Mary (Donna Reed) as his bride. However, things have taken a sharp tun in his life the last few years. After spending the first great war at home doing his part, things are dive bombed. The economy has gone off the deep end (what we would later know as the Great Depression), but George has been a beacon of hope to the community. Running his savings and loan department he gave loans to the downtrodden, help to those who needed, and never expected to be paid back knowing full well that most people would never BE ABLE to pay him back. 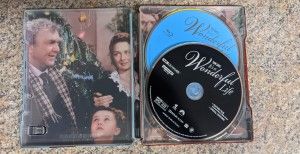 This may seem like a strange time to say that things are going downhill. George seems on top of the world, with a lovely wife, a decent business, and wonderful children. But trouble is a brewing on the horizon when one of the employees at the bank accidentally loses $8,000 (a massive sum of money back in the early 20th century), leaving the entire bank on the edge of bankruptcy. Without that money the entire business goes under and George will be on the hook for fraud from the Banking oversight committee. Even the wealthiest man about town won’t help him out, but would rather see the young man burn (when it is in fact HE who actually found the $8,000 and greedily pocketed it for himself), leaving the banker feeling trapped and with no way out but throwing himself off the bridge into the river below. That is until Clarence decides to stop in and show George just how the people in his small town would have turned out if George didn’t live.

It’s A Wonderful Life is not only a bit of pop culture, but it’s also one of the best non oscar winning films in it’s class. The story is simple at first, almost cloying in some ways as we’ve seen the idea of a ghost/angel/spirit coming down to show you what your life could have been in many a Christmas story, but there’s something different about this one. Capra crafted the perfect story about how our actions influence those around us, even when we don’t see it. It speaks directly to the people who feel like they don’t matter in life. Like their life is meaningless and worthless, and very compassionately and quietly sticks that knife into your side and twists until you realize just how far the emotional blade has struck. There’s something in it for everyone. Kids wanting a fun story, romance, a tragedy for all, and the simple peace of knowing that no matter how insignificant and small our lives are, there is someone out there that we affected positively. In this is case it’s the entire small town that George grew up in, and his own family. I could go on for quite literally PAGES discussing the implications of George and his loving compassion for those around him, and the deep implications of suicide and what it takes away from those around the victim, but in the end I just have to say that this is one of Capras true masterpieces and an utterly timeless classic.

Rated PG By the MPAA

According to the press release, It’s a Wonderful Life was given new life as Paramount went back to the original nitrate negatives and painstakingly restored the film from scratch. Two different negatives were used to get the most out of the old film, but 1 of the reels was never able to be fully recovered so a few scenes had to be taken from alternative sources and you’ll notice a bit of softness or lack of clarity in those few shots. That being said, this is an INCREDIBLE restoration for a 4K UHD disc, and the first time I’ve seen an actual black and white classic in 4K. Simply put, the results speak for themselves as this clearly blows away the already fantastic Blu-ray from a decade ago. The use of HDR really enhances the depth of the blacks, making them more inky and silken in their depth than I’ve ever seen before. There’s many a scene in the movie where there’s only natural or incandescent light being displayed, and as such is a VERY dark film. I noticed a few scenes that may be signs of black crush, but this is a very detailed film that show the true beauty of a black and white movie. I’m also kind of glad that Paramount DIDN’T restore the colorized version as well. I know it’s nice to have both versions of the movie (the Blu-ray included in the combo pack is the colorized version) but the colorized version was a made for TV alteration that really shows the cracks and chinks in the early colorization process, and isn’t close to as beautiful an image as the original black and white variant is.

It’s a Wonderful Life is sporting the exact same Dolby TrueHD Mono track that the Blu-rays have sported for the last decade, and that’s not a bad thing really. I would have wanted a new track that went back to the source material and tried to clean it up a bit, but from my sources within Paramount this really is the best they were able to get due to deteriorating elements on the sound end. For those wanting an Atmos or DTS:X track I would simply say this. There comes a point where trying to make something better and better just breaks it. It’s a Wonderful Life was never a high octane surround mix, but rather a simple 2.0 Mono track and trying to make a multi angle, wizz bang track out of the simple mix is just going slap happy with revisionism. The track is precise, simple, and gets the job done. There’s some analog hiss in the background and some sharpness on high notes, but the dialog is always intelligible and clean, and the score flows cleanly from the two speakers. 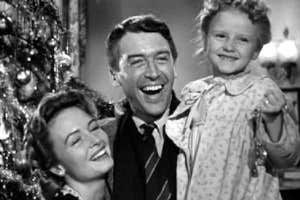 As old and over played as it is, It’s a Wonderful Life is a powerful classic that really does deserve the praise and love thrown it’s way. The film is one of those movies that just has me snuffling in tears by the very end, and probably is the most popular Frank Capra film in existence, and that’s saying something due to the massive amount of hits the man had under his belt. The new 4K UHD disc by Paramount is incredibly rewarding, as the new 4K picture of the black and white version of the film is nothing short of astounding. As for whether you should get this edition or the regular 4K UHD edition, that's simply a matter of taste. The discs are identical between the two sets, with the only additions in the steelbook being the fold out poster and the steelbook packaging itself. This set is definitely geared towards collectors (as most steelbooks are), but given the choice between the "regular" edition and this one, I'd choose this steelbook unless the price difference is prohibitive. A simple collector's "tweak to an already fantastic release. VERY highly recommended.

Thanks for the review. A great classic movie to own that is for sure.

Fabulous movie... one of my all-time favorites.

You strike and forge metals....rip disks
I picked the non-steel book up last week for $10 on amazon.

lol, yes, it's IDENTICAL in all terms for the discs between the two. this is just a collectible packaging edition