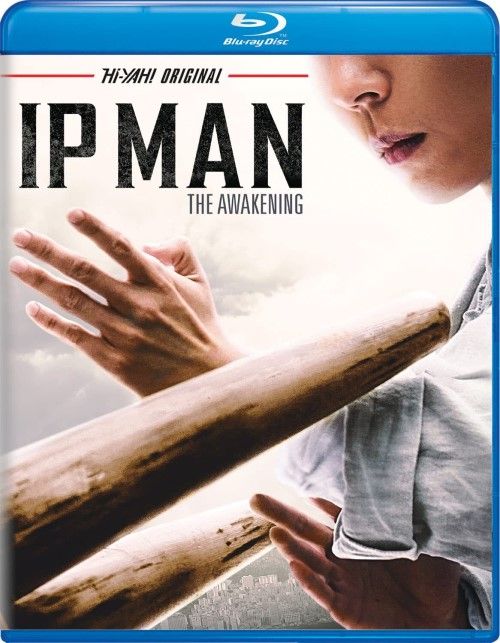 Movie
Ip Man may be known because of Donnie Yen, but he is one of the big Chinese legends along with people like Wong Fei Hung, that have been played by a myriad of actors. Supposedly the mentor for Bruce Lee, he was a known legend in China, but until Donnie Yen stepped into the role the iconic character was mostly unknown stateside. That ended abruptly with Yen dominating the screen as the fantastic martial artist, but also spawned a ton of copy cat films starring various actors, and all pretty much abysmal films. The last one I remember checking out was Ip Man: Kung Fu Master, and after that entry I was willing to just light it on fire, send it down the river and never speak of the character again. IP Man 4 was weak enough with Yen in the title role, but the low budget sequels have been nothing but abysmal.

Now, factor in that Ip Man: The Awakening is a Hi-Yah! Original streaming flick (basically China’s version of direct to streaming martial arts films) and I had very VERY low expectations for The Awakening. Ironically enough, I was actually a bit surprised by this one. The Awakening is by no means a good movie, and is actually pretty horrible, but it was actually better than Ip Man: Kung Fu Master, and gave me about 10-15 minutes of entertainment out of the 1 hour and 16 minute run time (before credits).

The Awakening is your typical origins story fare. We’re introduced to Ip Man (Miu Tse) and his buddy Feng having exploits in Hong Kong. A fist fight here, a fist fight there, taking care of robbers and petty thieves while having fun. That is until we’re introduced to the big bad evil villains in the form of Mr. Stark (no, not Tony Stark) and his minions. Supposedly British (even though they can barely contain thick Eastern European accents without even a hint of English in there), Stark and his men are running a human smuggling ring that Ip Man and Feng happen to break out. Out of revenge Stark captures Feng’s sister, eliciting the due to try and break her out. Push comes to shove, and soon Ip man is in a competition match for Feng’s sister, pitting his Wing Chun against the British gentleman’s martial art of Bartitsu (which Sir Arthur Conan Doyle popularized in his Sherlock Holmes character, which Robert Downey Jr. displayed in the Guy Ritchie adaptations). *yawn, you get what happens next.

Ip Man: The Awakening is a mixed bag of confusing times. Miu Tse is a good Hong Kong martial artist, and while he fights there’s actually some interesting choreography and fights. However, this is hampered by some weir slow motion effects and copious use of quick edits. Something which is the bane of a true martial arts film with ACTUAL martial artists. The final fight is upended with a flurry of motion that makes it so the action is left weakened and devoid of soul, and the stunts are just pitiful. Maybe it’s because I’m spoiled and grew up in the days of Jackie Chan and Sammo Hung, and Yuen Biao where they gave their lives and bodies for the camera, but whenever a stunt happened on screen (such as being thrown through a window) it was just a mess of CGI and clumsy editing.

The 1080p encode is quite nice, shot digitally and finished at 2K from what I could gather. It doesn’t have a lot of nuance to it, but is shot in bright lights and dim shadows, with neutral looking daylight shots (with some over brightening and slight yellow tones) and blue gray shadows that look quite nice outside of some very minor banding. Fine details are great, with bright primary color shades (the red paints across Hong Kong really pop) and excellent facial details on the villains and heroes alike. There’s almost a candy colored feel to the primaries, with deep deep saturation levels, and almost excessive brightness. Overall a very nice, if not sterile, looking encode.

Like usual, Well Go USA gives us both the English and Mandarin DTS-HD MA tracks AND dual 2.0 Dolby Digital lossy tracks for night listening. I much MUCH prefer the Mandarin track, and even though there’s very obvious dubbing for the villain, is not as egregious as the English attempt. The track is solid enough with good dialog (outside of obvious dubbing) and surrounds get some action with the copious fights. My only real major complaint is that the bass is rather neutered and uneventful. There’s a few “whomps” that add low end into the picture, but overall I felt this to a more reserved mix.

Is Ip Man: The Awakening the worst Ip Man movie I’ve ever seen? Sadly no, but that’s not exactly a ringing endorsement as the film is a giant mess from beginning to end with very little entertainment. The film isn’t even 80 minutes without credits, barely qualifying as a feature film, and outside of Miu Tse’s solid fighting style, the movie is just one giant “meh". The dissapointment when watching this flick is akin to your dad saying "Son I'm going to bring home a great martial arts film tonight!" and instead of bringing you Jackie Chan, Jet Li, or Yuen Biao, he brings home a Billy Blanks movie with Jalal Merhi as the villain. The Blu-ray looks great, sounds good, but we’re left with only trailers as extras. As a huge fan of mindless martial arts films, it pains me to tell you guys to just skip it. Not even worth a rental.