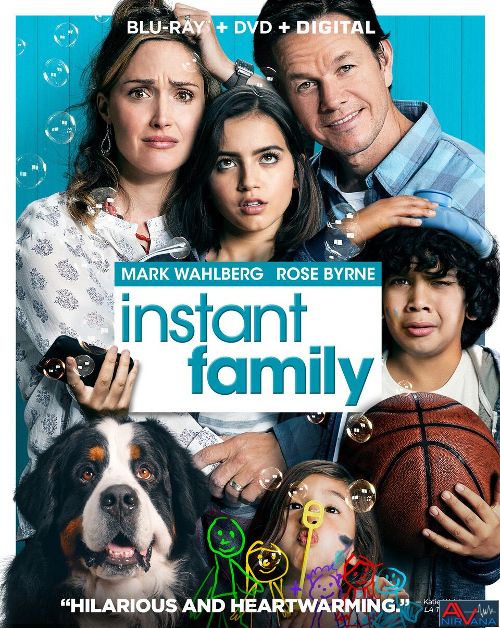 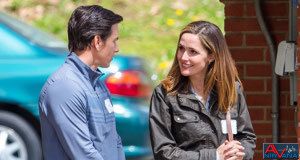 Honestly, I wasn’t expecting much of Instant Family. I didn’t pay attention to it during it’s theatrical run, and the only thing I knew about the film was that it was by the guy who wrote and directed films like Daddy’s Home (and the sequel), Horrible Bosses 2, Sex Drive and That’s My Boy. A repertoire of films that doesn’t inspire much confidence except for maybe Horrible Bosses 2 and Daddy’s Home. As a result I was expecting a stupid comedy to veg out to and was completely thrown for a loop when I actually got to sit down and watch it. Inspired by Sean Anders’ own life with a blended family, it tells a truly heartwarming (and genuinely funny most of the time) story about a married couple going out and adopting a trio of teens instead of having their own kids. I laughed, I cried, and I was truly impressed by what I saw on screen. Instant Family jumps to the top of the list of Sean Anders best works, and except for a few small hiccups with the humor, this was truly a great movie (I was originally going to rate it a 4.5/5, but there were some missteps with a few scenes that forced me to rate it a 4/5 instead).

Peter (Mark Wahlberg) and Ellie (Rose Byrne) are starting to think about kids now that their home flipping business has taken off. Pete is OK with the idea of kids until Ellie starts giving him the sob story of adopting instead of giving birth herself. That is until Peter starts actually looking into the concept of adopting and realizes how many needy kids there are out there. Going into adoption mode, the two go and enroll in a course to help prepare them for what’s ahead they end up doing something unexpected. Instead of going for a little one, the duo runs head first into the most challenging demographic….teenagers. Hitting it off with spunky Lizzy (Isabela Moner) Pete and Ellie end up taking her in with her younger siblings Juan (Gustavo Quiroz) and Lita (Julianna Gamiz).

Thinking that they’ve got it covered, the young couple soon find out that raising children, especially older children who have been jaded by the foster system, is MUCH MUCH more challenging than they ever thought possible. Lizzy is your typical rebellious teen, but one that has also been around the block and forced to be sister AND mother to her siblings at the same time, adding a tough outer shell that is hard to get past. Not to mention the fact that Pete and Ellie are out of their comfort zone to begin with. However, as is the case with these types of situations, some support therapy help from other parents, a good dose of reality, and a lot of hard work eventually allows this misfit group of 5 people to form into what they each so desperately want. A family. 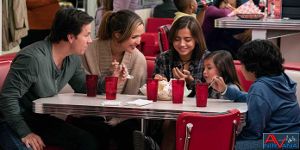 Sean Anders took the concept for Instant Family from his own family and ran with the concept, blending typical goofball humor (I liken it to a darker and more serious version of Daddy’s Home humor) with a very heartfelt and nuanced drama about the tough aspects of forming a family from the foster system. I was actually tearing up quite a few times through the movie as Anders deftly weaves in his humor with actual scenarios from a foster family. Having grown up with half of my brothers being adopted, I noticed all of the tell tale signs that Anders was pulling from his own personal experiences. He doesn’t shy away from showing all of the little (and big) pitfalls that happen in trying to bond with foster children. The little success when a parent seems to get through, followed by a huge step back as the child rebounds from the happiness they felt, feeling guilty that they are betraying their birth parents, and countless other little “realities”. At times it’s tough to watch because of how REAL some of the scenarios truly are, but the humor lightens things up a good bit.

By the end of the film I was truly enjoying the movie with all my might, and while I understand some people might say “hey! This ended TOOO happily”, I have this to say. This was filmed as a dramedy, and while it may wrap things up much more quickly than reality (some foster children take YEARS to adapt to a new home), it’s done to conserve time, and doesn’t come across as cloying at all. The character portrayals on screen were fantastic, with Marky Mark and Rose doing great, but it’s really Isabela Moner that knocks it out of the park as teenage Lizzy. She’s funny, annoying, heart breaking, and completely relatable to anyone who’s ever been through the system. My only complaints with the movie were that some of the comedic moments felt forced. There’s a few lines here and there that sort of took you out of the movie a bit (Iliza Schlesinger’s scene at the beginning for example), with the most egregious one being Joan Cusack’s cameo at the end. That scene was PERFECT except for Joan’s attempt at comedy which stuck out like a sore thumb. Had it not been for those brief moments that took me out of the film, I would have rated it a full 4.5/5.

Shot with Arri Alexa digital cameras and finished at 2K for the digital intermediate, Instant Family comes to Blu-ray with a show stopping encode that looks exactly like what one would expect for a modern dramedy. Colors are well saturated and really pop off the screen, while the film is drenched in a sort of heavily brightened sunny glow that permeates the entire film. The colors are bright, warm, crisp and look fantastic, whether that be the interior of Pete and Ellie’s home, or in the bright sunlight of a school parking lot. Black levels are strong and well defined ,with good shadow detail in the few darker scenes (usually interior shots). Clarity and sharpness of the disc are above reproach, and fine detailing naturally benefit from that. There’s a mild hint of softness in some of the indoor scenes, but overall this is a fantastic looking disc.

Well, this is a dramedy and as you can probably guess, the 7.1 mix for the film is a LITTLE bit of overkill for the genre. That’s not to say that the lossless audio mix is bad at all, but rather that it isn’t wildly demanding and the use of 7.1 vs. 5.1 isn’t that noticeable. It’s a dramatic track with mostly dialog, and that dialog is handled quite nicely in the center channel. The surrounds and mains open up a bit with the demolition scene, or the screaming of students when Peter and Ellie confront “Jacob” in the school yard, but for the most part this is a track that focuses on the front of the room more than the rear. The LFE channel has some bumps to it in those before mentioned scenes with the demolition and school yard, but it’s main focus is adding mild ambient low end to the score. It’s a good solid track for the genre, and does everything impeccably with it’s only “sin” being the fact that it’s a dramatic movie track vs. an action track.

• Audio Commentary by director/writer Sean Anders and writer John Morris
• Introduction by Sean Anders and John Morris
• Gag Reel
• Deleted & Extended Scenes
• Mr. and Mrs. Fix-It—Behind the scenes with Mark Wahlberg and Rose Byrne
• Kid Power—Meet the talented young cast
• I Need Some Support—Octavia Spencer and Tig Notaro guide a group of parents through the laughter and tears of foster care
• Order in the Court—Inside one of the film's most heartfelt moments
• The Families Behind the Fair—Hear from real foster families
• Crew Inspiration—Crew members share their own foster care stories
• The Anders Family—The real-life inspiration for the film
• Isabela Moner "I'll Stay" – Promotional Music Video
• On Set Proposal—A surprising wedding proposal from one crew member to another

​
Instant Family ended up being WAY better than I expected. It’s a truly heartwarming family film with a solid dose of Sean Anders comedy stylings (think a more droll version of Daddy’s Home humor) with an ending that had me tearing up like someone was cutting onions in the room. Anders outdid himself here and while there were a few “pull you out of the movie” moments, it’s really fun, really sweet film that I have to really highly recommend. Paramount’s Blu-ray is also incredibly well done with great video, good audio, and jam packed with special features. Highly recommended.

Thanks for the review. I was not that impressed with the trailer so was not interested in checking it out in theaters. After reading the review here, I am curious so will check it out once available on amazon prime/netflix.

Lol. Agreed. The trailer was less than impressive, but the movie is WAY better than trailer.

I had never heard of it but will check it out.

Thanks for the review... I also enjoyed the movie

Dang it Michael, so many positive reviews let’s me know I am so behind in watching them. This also lets me know that I may have mentally bypassed a movie or two because the title suggested crummy movies. I guess I hereby stand corrected, once again thank you Michael

We just watched this one and I’ve gotta say I was pleasantly surprised. What a great family movie that will make you laugh and cry. Like Mike said Highly Recommended.

glad you liked it Jeff. I was very surprised by it, considering Sean Anders historical film pedigree

Michael Scott said:
glad you liked it Jeff. I was very surprised by it, considering Sean Anders historical film pedigree
Click to expand...