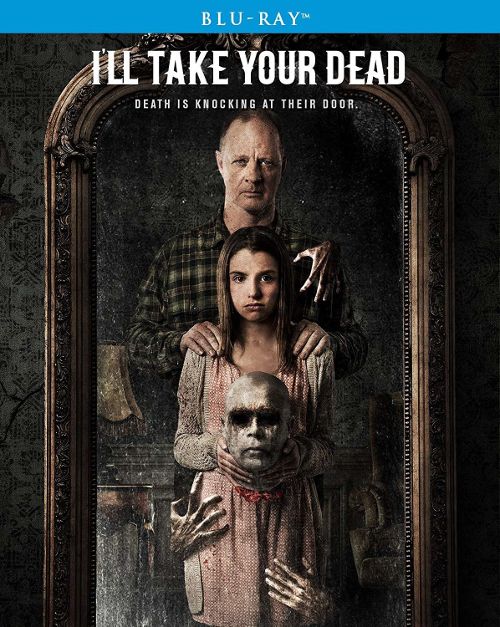 Movie
While Scream Factory usually holds their appeal for their releasing of back catalog horror films from yesteryear, they also have a fairly strong catalog of new release indie horror movies, and I’ll Take Your Dead actually intrigued me from the trailer. This time it wasn’t a foreign horror movie, but a more domestic one, and the vibe was very macabre with a blending of The Sixth Sense with a grungy noir vibe. Upon further review of the film I’m actually wrong. I’ll Take Your Dead really isn’t a horror movie at all, but rather a supernatural thriller with drama undertones that take advantage of some of the creepiness of horror movies. Yeah, it’s a bit of a genre bender here, but the film actually works in a strange sort of way. There’s some bloat in the center act of the film, but the ending act is actually really good, and elevates the movie back up to where it was going in the first act.

I’ll Take Your Dead centers around a farmer named William (Aiden Devine) who acts as the “clean up man” for the inner city gang wars going on. He gets a deposit of dead bodies, and he uses his skill to break down the flesh and bone, getting rid of any and all evidence that the person was living. Known as the “Candy Butcher” (wildly embellished of course), William lives out in the country with his 12 year old daughter Gloria (Ava Preston), who is kind of used to the rough world of disposing of bodies. However, this latest batch of bodies changes things up a bit when William discovers that the female body is still breathing.

Not sure about what to do, William patches the young woman up (played by Jess Salgueiro) and tries to figure out what his next move is. Not willing to kill her (William only deals with DEAD bodies), he and Gloria slowly form a sort of begrudging camaraderie during her stay there. Jackie (the woman) naturally wants to get out, and despite William’s good intentions, she’s not willing to take the chance that he will set her free, and ends up bringing the same people who tried to put her into the ground right to their very doorstep.

I’ll Take Your Dead actually works for the most part. It’s a rather creepy thriller that really has you guessing on whether or not it’s going to be a horror movie in the end. Gloria supposedly can speak and commune with the dead spirits of all the bodies that her father has dismantled over the years, but William plays it off as her imagination. Even the viewer begins to wonder if it’s all in the 12 year old’s head, as it could just be the trauma of dealing with that much death at such a young age. That sort of guessing keeps the mood creepy and disturbing, while the rest of the film plays out much like a traditional crime thriller.

The issues that the movie struggles with is a bloated and sluggish center act. Too much of the bonding with Jackie feels like filler material and it’s not until the 3rd act that the movie picks up again. It’s not that I condemn the film for not moving quickly, but that the scenes just seem to exist in order to pad the already short film until we get to the stand off between William and the gangsters. However, the end conflict is MORE than satisfying and one of the best parts of the whole movie, bringing the film full circle to the very opening scene with Gloria narrating in the truck.

The 2.35:1 framed AVC encoded Blu-ray is a rock solid disc that generally looks great. Many of the outdoor scenes are crisp and clean, with razor sharp details of snow and wood siding, revealing amazing facial details. The inside shots are good, but not as amazing as the outdoor shots as the film takes on a weathered parchment type look to it, and some minor banding pops up here and there. Black levels are strong and healthy, with minimal digital noise inside and under the house in the basement, and the colors are well saturated. They never really “pop” except for the orange jumpsuit that William uses during his dismemberments, and some blood, but they’re still very stable and solid.

The 5.1 DTS-HD MA track from the disc is your average thriller track, and a bit above average in sound design. The farmhouse is filled with creepy groans and ticks throughout, and the LFE channel jumps and bumps with more than few surprising moments. The surrounds are active and play nice with plenty of discrete background sounds coming through (said groans and creaks tend to come in from the rear of the room) , and the dialog is well placed and crystal clear. It’s an effective track that makes good use of the cramped location, but doesn’t really excel past that.

I enjoyed I’ll Take Your Dead more than I expected to, and it is a generally good gotchic thriller. Aida Devine and Ava Preston do a good job as the father/daughter duo, and the final action scene between them and the gangsters is really well done. It’s not a perfect movie, but makes for a solid enough rental at the very least, and those who like gothic thrillers will get more out of it than your average viewer. The Blu-ray is done with solid audio and video, along with decent extras. As I said, may not be perfect, but is an enjoyable thriller.

Thanks for the review. Will catch it once on amazon prime/netflix.