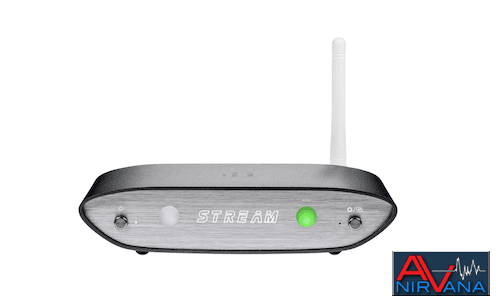 (June 25, 2021) The master of affordable Hi-Fi audio gear is at it again, giving the AV world yet another streaming-centric device. This time, Southport, England’s iFi Audio has cooked up a wireless audio transport born free of restrictive streaming platforms and sub-standard DACs. As it’s called, ZEN Stream is a compact Wi-Fi streaming component that acts as a bridge between digital music files and a dedicated DAC or DAC-equipped integrated audio component.

ZEN Stream supports PCM signals up to 32-bit/384kHz and DSD up to 11.2MHz (DSD256) over Wi-Fi and Ethernet. It also supports TIDAL Connect and Spotify Connect for direct streaming from those service’s respective apps, streaming via AirPlay, compatibility with Roon Bridge software, and DLNA certification out of the box. Chromecast functionality will be added via firmware update later this year, and iFi believes Roon Ready certification is forthcoming. Additionally, ZEN Stream can serve as a Network Audio Adapter when used with Sygnalist HQPlayer software, passing packets received via Wi-Fi or Ethernet to an external DAC without applying any processing.

To hone performance, ZEN Stream can be set to operate in one of five exclusive modes (All-In-One, DLNA Streaming, NAA Streaming, Roon Bridge, and TIDAL streaming). These modes fully optimize performance for one specific type of use.

ZEN Stream’s simplified physical indicators and appointments complete a package that’s meant to deliver elite levels of performance without blowing up the wallet. The faceplate, for example, doesn’t carry any sort of display (leaving a user’s streaming service or control app to relay track information), only presenting status LEDs and a Wi-Fi hotspot button. And if ZEN’s onboard dual-band Wi-Fi isn’t used, the device’s backside gives owners access to Ethernet, USB-A, and asynchronous USB and S/PIDF connections.

There's been a lack of reasonably priced streamers for the audiophile. This seems to be perfect for the person who already has a DAC and wants to start using network streaming. It's far less costly than most such units I've seen.

What none of the iFi literature says is whether it supports GAPLESS playback. One shouldn't have to ask, but there's no other way to be sure. Maybe AVNirvana would contact iFi and ask?

Great point. I’m hoping to source a sample for review... but, at the minimum, I’ll try to get an answer from iFi.

I’d hazard to guess the answer is yes
M

I would have thought so, too. Then I saw that another recently released streamer exhibits the added-gap bug. It's hard to fathom, in this day and age.

Obvious answer... this streamer is only a transport, so PCM gapless is more or less dependent on the DAC that it feeds. iFi says that a very slight pause may occur when playing MQA.
Last edited: Jun 30, 2021
M

Todd, that's not as obvious as one might think. AFAIK, gapless playback on DLNA requires the renderer (the Zen Stream) to correctly support the "SetNextAVTransportURI" DLNA command. Some do, so don't. Apparently, there are still on the market some turnkey chipsets that don't support this. I would guess it requires extra memory to buffer at least the start of the next track.

A non-gapless renderer ("streamer") feeding a DAC that can in theory handle gapless playback still will add extra gaps. I learned about that the hard way in several cases.

Point taken... and I do note that iFi specified PCM, not DLNA.
M

I recommended a friend look into this, and he wrote back that the Zen Stream doesn't support Qobuz directly. That wouldn't bother me -- I use Quobuz via Roon -- but to him, it's a deal killer.

It's astounding to me that no one seems to manufacture a <$500 streamer (DAC-less) with a good, complete feature set, and simpler to set up and use than a Raspberry Pi.

I have ZEN Stream in the house and operating… it’s in the review queue!

Mike-48 said:
I recommended a friend look into this, and he wrote back that the Zen Stream doesn't support Qobuz directly. That wouldn't bother me -- I use Quobuz via Roon -- but to him, it's a deal killer.

It's astounding to me that no one seems to manufacture a <$500 streamer (DAC-less) with a good, complete feature set, and simpler to set up and use than a Raspberry Pi.
Click to expand...