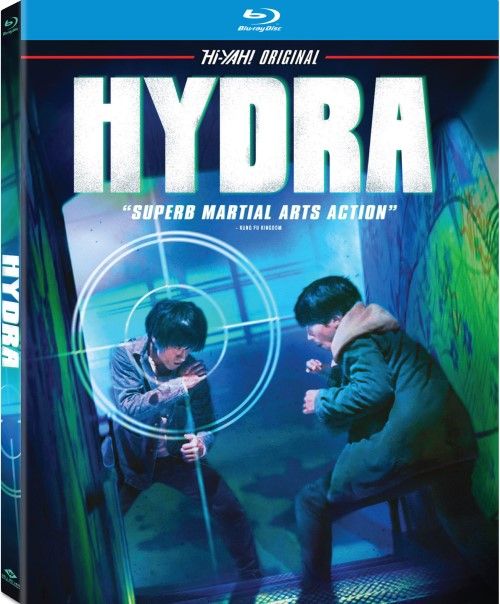 Movie
Movies about hitmen coming back from retirement are the rage right now, and most of them are really fun. There’s something attractive about a guy coming out of his twilight years to bring villains to justice in bloody glory that seems to resonate with audiences, so you can be pretty sure that I was more than eager to review this Japanese take on the genre. Usually I’d expect a Japanese film of this style to be overly gory or insanely gonzo with insane characters (think Ichi the Killer), but Hydra is a pretty down to earth film that only goes full nuts on two occasions. The movie unfolds in a dual arc story. The first revolving around the setup for the big finale, and the second half letting the audience in on all the clues that had been set before it.

The film opens up with a cop being hit by a contract killer, only for us to jump to our main character Takashi working at a restaurant. He’s quiet, calm, and seems rather odd to the young owner of the restaurant, Rina, but she’s grateful for the help. He always seems just too quick on the ball, and has a near psychic sense for danger and potential fights to break out. However, his quiet world comes to an end when it’s revealed that he was a former hitman who worked for an agency that targeted bad guys the cops couldn’t seem to get. Even if those bad guys were cops themselves. A former associate tries to pull him back into the agency once more as Takashi was one of the best, but it’s revealed that he’s keeping an eye on his young boss Rina because he was forced to kill her father.

But fate has other plans, as ANOTHER agency is gunning for Takashi. This mysterious killer begins to prey on his fellow team mates, going through them one by until he uses Rina as bait for one final showdown. A showdown which pits killer against killer and very well may end Takashi’s simple existence.

The short film (barely an hour and fifteen minutes before credits) plays things a bit TOO close to the vest for my liking. It takes nearly 36 minutes before the action starts taking place, and even then the film only has another 2 action sequences (3 if you included the minor shootout) to work with. Most of the movie is shrouded in mystery, with Takashi’s past being doled out in small bits. This might have worked if there was another 20-30 minutes of runtime, but the movie’s short runtime is both a blessing and a curse. There’s not a whole lot of time for superfluous moments, but it’s also a negative when you consider that the story of Takashi and the mysterious agency he works for still has a ton of questions that need to be asked.

The movie is solid, but never perfect, and while I was intrigued with the mysterious nature of the storytelling, there’s just not enough meat on the bones to really make this a great film. I did appreciate the typical penchant for gonzo gore and violence in Japanese action films was HEAVILY toned down for this venture, as it made it more realistic and believable for general audiences (typical Japanese gonzo fare is very much an acquired taste if you’re not familiar with the way the country does its live action films). I WAS however very impressed with the martial arts choreography. There was some very nice traditional Karate and the grappling techniques used were superb (I spent many years taking Japanese Karate and grappling). Something which is usually missing from most Asian films (the Chinese don’t use a whole tone of traditional grappling like the Japanese styles are prone to).

I dug around for a while but still couldn’t find much information about the filming style of Hydra. It was filmed back in 2019, but outside of a few rumors that it used digital cameras, I couldn’t find ANY information on what those cameras were, what the resolution of the master was, or pretty much any other technical data on the film whatsoever. Personally I’m leaning towards a 2K master with some form of digital camera based upon the look and the budget, but if anyone has any other information about the creation of this film I’ll gladly update this portion of the review.

It’s an interesting presentation, with cool blues for some portions, strong yellows for others, and a mix of gray and brown that alternates between the two. It gives it a sort of grimy and grungy look, though some portions (such as the Hydra restaurant) look bright and shiny. Fine detail can fluctuate, with some of those brightly lit sequences showing great detail levels, while others get a big washed out and filled with black crush. There’s some mild banding going on, but surprisingly this plays second fiddle to the washed out levels and crush. The film really does jump around with the visuals, with some scenes being heavily desaturated, while others are deep and vibrant (one scene in particular is filled with deep purple over tones). It’s an interesting look visual aesthetic, and one that can ebb and flow with quality level.

The 5.1 Japanese DTS-HD MA track (no English dub found on board) is solid, but a rather quiet affair by choice. There are flickers of bass throughout, but most of the time the LFE is very subtle and unobtrusive. Large portions of the film (especially the first half) are very dialog driven with very little surround activity except for mild ambiance in the restaurant. The second half picks up a bit when the fights happen, but once again, the track isn’t heavily mixed with lots of LFE and surround activity. They’re most certainly there, but not the focus of the mix. Dialog is well placed and never unintelligible, but I did notice that they could be whisper quiet some times. A good mix, but not one designed to be super explosive.

The good old “retired hit man getting back into the game” has really seen a resurgence thanks to John Wick (Nobody was surprisingly good), but Hydra may not exactly offer a whole lot of something new, or something THAT entertaining. The very short movie keeps things a bit too close to the vest for the first half of the film, and by the second half it just doesn’t explain ENOUGH, nor does it give enough action to truly make up for the slow start to the movie. It’s fun enough, and certainly entertaining considering it’s VERY different than the typical Japanese fare, but still something more like a rental at the end of the day.