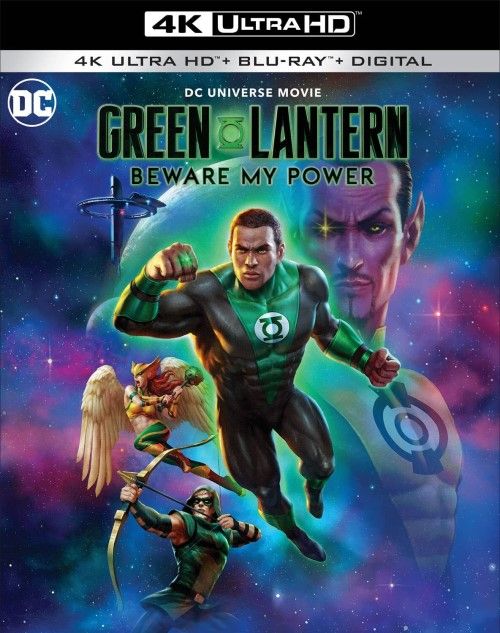 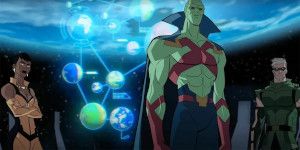 Movie
It’s been a long time coming, but it’s nice to see the DCAU recognize John Stewart as one of the most influential Green Lantern members. Sure we’ve had Stewart in the animated Justice League series over 20 years ago, but in the modern day DCAU films it’s always been pretty much Hal Jordan. I guess with the upcoming John Stewart live action film coming up it was about time to bring him into the animated world as well. Green Lantern: Beware My Power makes a few odd choice in how it blends a few different comic story lines together, and is a bit overly complicated for its own 87 minute good, but overall it’s a decent standalone DCAU film.

The film opens up with a scene that most Green Lantern fans will recognize. A man finding a dying alien in a crashed space ship, and subsequently gets a Green Lantern ring. However, instead of this being the classic Hal Jordan origins, it’s instead a tale of another fantastic Lantern, an ex Marine with PTSD known as John Stewart (Aldis Hodge of Leverage fame). John doesn’t exactly want this power though, and is seeking to pull the ring off when the power of the ring transports him to the Justice League orbital space station to get some answers. Turns out the ring is actually Hal Jordan’s (Nolan North) ring, meaning the most famous Green Lantern ever to exist is either dead, or in serious trouble.

With Green Arrow (Jimmi Simpson) by his side, John travels to Oa to find out why the guardians sent him the ring, and if they would be willing to release him from his role as Lantern. But upon arriving all the duo finds is utter destruction. The guardians have been slaughtered, as have all of the Green Lantern members on Oa as well. The only person left alive is a Thanagarian known as Hawkgirl (Jamie Gray Hyder) who believes that the world of Rann is at fault for it all. However, when arriving on Rann they find that both Thanagarians and Rann are already at war once more, each thinking the other started it. Things start to make sense when a zeta beam drops Adam Strange (Brian Bloom) back on Rann for the first time in years, and he starts to put the pieces of the puzzle together for them. It seems that a mysterious force is at work behind the scenes trying to goad both Rann and Thanagar into war for their own personal gain, and it’s up to this rag tag group of leftover heroes to stop them.

There’s some interesting story elements going on in Beware My Power. The movie attempts to bridge the 1994 comic tale of Hal Jordan turning into Parallax, and blending it with Blackest Night from the Justice League animated series, as well as a few other comics. It changes a loooooot of things too, ranging from John Stewart never being involved in the whole Hal Jordan going mad plot point (it was actually Kyle Raynor, who I would love to see take front seat some time), as well as the resolution. It’s kind of it’s own thing really. Still, that’s not the issue with the story. While I enjoyed the inclusion of John Stewart and the destruction of Oa, the movie is overly complicated and bloated for an 87 minute film (including credits). We have like 3 full subplots involving Sinestro, Adam Strange, and the Thanagarian/Rann war to contend with the main John Stewart/Hal Jordan/Parallax story, and as a result it feels like things just happen too quickly and resolve themselves too fast. The movie could have really benefit from another movie and make it into a two parter with more fleshing out. The Parallax story alone requires it for the sheer density of the fall of Hal Jordan, let alone the other additions we got.

Luckily over time Warner Brothers and DC have learned how to apply proper HDR to their 4K UHD discs. Like usual, the disc’s animation is not going to show massive improvement over the 1080p Blu-ray. The simplistic style of animation just doesn’t lend itself towards massive amounts of extra detail that 4K can take advantage of. HOWEVER, the HDR and the bright colors used throughout really do make it a substantial boost over the Blu-ray, along with the lack of artifacting. Sure, there’s some minor banding (the worst being when the ship’s ramp drops when they first get to Rann. That tan color bands heavily for a split second), but it’s definitetly an improvement over the banding in the Blu-ray (not atypical of the DCAU films. They always appear baked into the master). The greens and yellows and reds are really really bright and vivid though, and give the entire film’s image a well saturated and textured look as a result.

The audio mix is the same for both Blu-ray and 4K UHD (5.1 DTS-HD MA), and it’s another solid entry for the DCAU. It’s spicy, and full of low end during the Rann space battle, but never overly aggressive. Battles have plenty of puch and power, and the surrounds get used a lot during those instances (swooshing of Green Lantern energy, bodies flying across the sound stage etc.). The track can also be very front heavy and talky due to the whole slow paced detective story for much of the movie. A good mix, but never one to really stand out and be shockingly amazing.

Green Lantern: Beware My Power is a fun little throwaway entry to the DCAU canon line up, but it’s not exactly a stellar film either. It’s bloated, a bit too fast paced, and every once in a while the dialog is a bit too Saturday morning cartoonish for a PG-13 film. The 4K UHD disc is quite nice though, with great video and very good audio, but typically middling extras. Solid watch if you’ve enjoyed the DCAU up to this point.