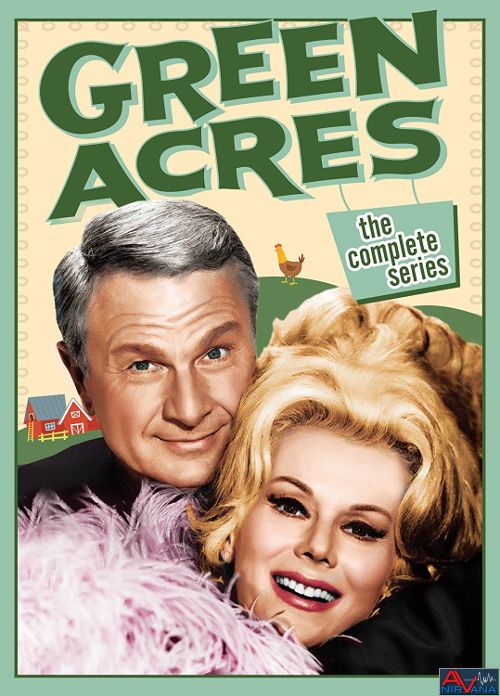 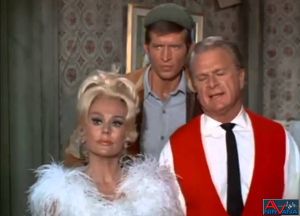 Movie
Shout Factory continues on with its pattern of rescuing old sitcoms from all points in times to finally hit DVD (or Blu-ray every once in a while) for the very first time in all of their complete glory. Green Acres was a stunning achievement back in the 1960s (and spilling over into the very early 70s), with one of the most startling breakout comedies of its time. Unfortunately us “youngins” who didn’t get a chance to see the series when it aired, or only caught sporadic re-runs, didn’t have much of a choice when it came to home video. Back around 2005-2007 Universal released the first 3 seasons of the show, and then did what Sony and Disney were famous for. They dumped the rest of the series into limbo and we had to make do with only half the series available to view. Well, Now we can have the ENTIRE six seasons of the show in a nice complete boxset and without having to pick and choose seasons to complete our collections (which unfortunately means that those of us with the old Universal sets have to re buy those to get seasons 4-6).

Green Acres is one of those old comedies that ends up being far more subversive and deep for its time. Back when it came the series was programmed as a reverse Beverly Hillbillies (which had been going gangbusters for 3 years at that point), but unlike it’s predecessor, Green Acres didn’t run off of one single “fish out of water” gag for its TV run. The first season runs off of that premise, but soon dissipates into a show all its own once the city couple settles down into their country life.

The first episode gives us all the backstory you need. Oliver Wendall Douglass (Eddie Albert) is a high priced attorney in New York City thanks to his father pushing him into that career. Most of his life has been spend moving from place to place to place, dissatisfied with his existence, as the man has a passion for farming. The only thing is that he can’t exactly do too much farming in the big city, leading to a bit of life altering decision for the man. He’s told his lovely wife Lisa (the stunning Eva Gabor) many a time that he is going to go out and buy a farm, but she writes it off as a “yes yes dear, we know” type of fantasy. One day Oliver just snaps, and goes out to a little town called Hooterville and buys a run down farm (that no one in their right mind would actually want), dragging Lisa along with him. 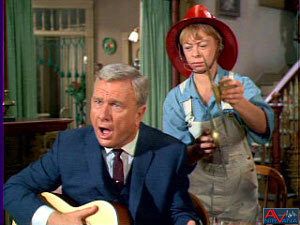 The first season spreads out the introduction to Hooterville over the entire first year. Slowly getting the VERY reluctant Lisa to learn how to live in this new world, and the episodes basically propped up by Oliver’s unending optimism and blind enthusiasm for his new career. Hooterville itself is populated by a crazed cast of hillbilly country folk who seem to live in their own little magical world. One that allows the lunacy of Oliver and his wife buying a farm no one wants to fit in just fine. The supporting cast fills out the show with ample glee, ranging from the duplicitous and money grubbing Mr. Haney (Pat Buttram, who everyone knows as voicing The Sheriff of Nottingham in Disney’s animated Robin Hood film. The nasely voice kind of is a dead giveaway) who sold them the place, to the kindhearted (but slightly dim) Eb Dawson, the hired hand (Tom Lester).

The show is beyond hilarious at times, and plays quite heavily to the bemusement of the town of Hooterville (and the audience) for Oliver almost worshiping the American farmer and his joy of working out in the field (despite knowing about as much about REAL farming as I do about mechanical engineering after taking an intro to math class). Lisa spends a good portion of the first half bemoaning their plight out in the boonies and begging to move to New York, but the first season is just the introduction to the show. The series had hit full gear, and the back and forth bemoaning of their situation turns into a steady satire about the red tape and garbage we have to deal with in life. Emphasizing the futility of trying to escape it, even if it’s in your dream job.

The cast excels in the 2nd through 5th season, giving us some of the most strange and crazy characters known to TV at the time. The sneaky, money grubbing, Mr. Haney always is there to soak poor Oliver for a few bucks if he can, but we get to see Alf and Ralph, a pair of gender confused carpenters who fail miserably at their jobs. Arnold the TV watching pig (literally), County Agent Hank Kimball (who can never say EXACTLY what he means) and many more. What made the show stick out in the day was the heavy serialization of the show. There would be 4-5 episode arcs that would progress, instead of just doing the standard episodic style of that day’s sitcoms (and even these days sitcoms). Something that made it stand out from all the rest. Much like The Dick Van Dyke show, the series progresses and continues on an uphill narrative climb, adding more and more backstory to the couple’s problems and joys as the series unfolds. The 5th season falters JUST a little bit, and so does the 6th, but the show manages to keep a very very high level of entertainment going without falling into the old bell curve rut that most shows ascribe to (decent first season, 2nd and 3rd rise to great heights, then the show just falls off the deep end before its canceled). There’s never a perfect series, but Green Acres managed to set the bar high and keep that bar from falling unceremoniously as one would normally expect after 6 long years of 26-30 episodes apiece. 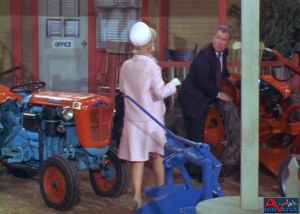 Shout Factory’s encode for the series looks solid, but there doesn’t appear to have been any major restoration work or remastering for the series. The first two seasons look a bit grainy and gritty, with some scenes showing noticeable degradation in the source material (those few shots stand out like a sore thumb), but then as the show progresses it cleans up nicely. Right about season three the grittiness and graininess dissipates and the shows natural beauty shines through. Fine detail can look quite good, but there is some inherent print damage and speckles that keep the show from being incredibly brilliant looking. Colors are warm and fit in with the soft pastels of the day, with the blue and green farm house looking soft and warm, while Oliver’s red jacket pops off the screen nicely. Blacks are nice, but nothing special, with some crush going on in darker shots. It’s a decent looking transfer for an old sit com, but without a new restoration it looks like this is the best we can get. 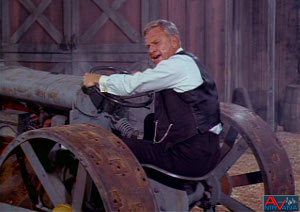 The Dolby Digital 2.0 track is what you would expect for these types of shows. There’s not a whole lot of activity going on that would require a 5.1 track, with 95% of the sound being the dialog and banter between the characters on screen. Vocals are clean and clear for the most part, with only minor scratches and a thin high end to act against it. The mild sound effects for the show sound good, with clomping feet, slamming doors, and falling ceiling plaster replicated without any problems. Simply put, it’s a dialog driven track for a show that really doesn’t require a whole lot of work from the audio. Everything is reasonably balanced and I detected no major issues that would ever become an issue to the listener, well done for the type of show it is. 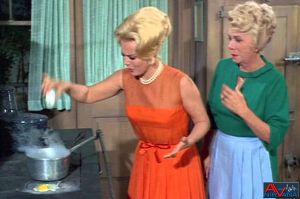 Green Acres may not be the PERFECT sitcom of it’s era, but it was pretty stinking close with a fantastic case of characters (I could watch Eva Gabor dice carrots for hours on end and not be bored) and a great contrast of witty humor and dry subversive “wink nod” laughs that kept me chuckling all the way through the series. Shout’s Boxset looks and sounds similar to the old Universal sets, just with a sligthly better video encode (to my eyes) and some ACTUAL extras this time! (something the first three universal sets had zero of). A fantastic show, Green Acres: The Complete Series is a wonderful buy for those of you who love classic situational comedies, and Shout’s reasonably priced boxset is just the ticket for this upcoming holiday season. Definitely a great buy.

Thanks for the review. I remember watching this as a kid. Funny as anything.. Worth watching over and over again.