What are some of the places that you love to go to listen to live music?
L

One of my favorite places to go is the Amphitheater in St. Augustine, FL.

While the sound is not the greatest, it is a wonderful place to go for an evening. Recent upgrades to the area outside the amphitheater and the nearby state park and great city make it worth the trip from Gainesville. The site is adjacent to the state park and you can walk from campsites if you like to camp. Parking with shuttles from the beach parking lot make it easy to access and allow for a walk along the beach before or after the events.

There's a great venue near my home called the Strathmore. It's located in Rockville, MD. I just saw the Big Head Todd Blues tour there... Acoustics are out of this world... it's a special place. Another is a place called Wolf Trap located in Northern VA (which for you non-mid Atlantic folk is the area of VA that surrounds the DC Metro area). It's an outdoor venue that has covered seating and then a grassy area for general admission. They have great shows... I saw Ben Harper's first ever solo live performance there a few years ago (he was fantastic!)

My favorite venue - ever - however, was a total hole-in-the-wall club in NW Wash DC called 9:30 Club. The club has moved to a new location (1996), but when I was in high school it was located at 9th and F Street, which was semi- rundown area of Washington DC. It has since become the approximate location of the Verizon Center (where the Caps and Wizards play... its in the vicinity) and the whole area has become super nice...

It was a dump.

Sound wasn't good or bad, it was just loud!

It held about 200 people standing?

And it had great bands... bands like REM, Red Hot Chili Peppers played there... DC locals like FUGAZI... international acts like the Sundays and Cranberries... and everything in-between (I've seen big acts like Green Day at it's new larger location).

There were punks, slam dancers, suburbanites, you name it...

The entrance to the building was a narrow one surrounded by stores that always seemed to be closed. Here's a couple street shots: 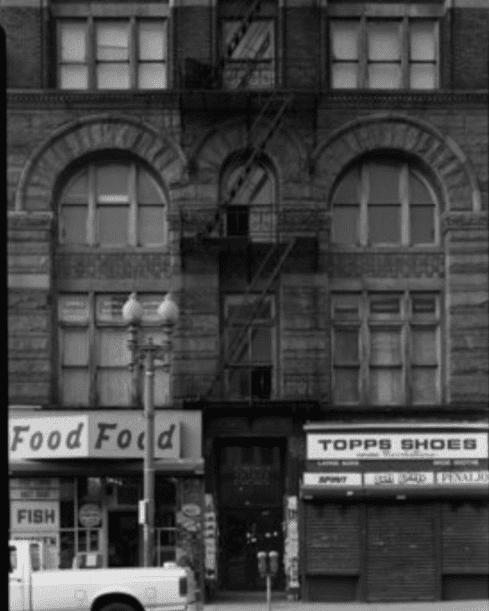 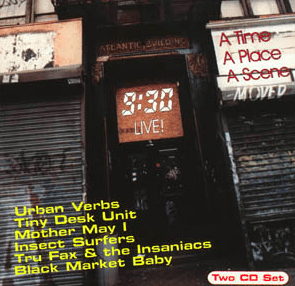 That door way led to a long hallway that was always open before shows... if you arrived earlier enough you could sit in the hallway and listen to sound checks (which, as a fan was a thrill): 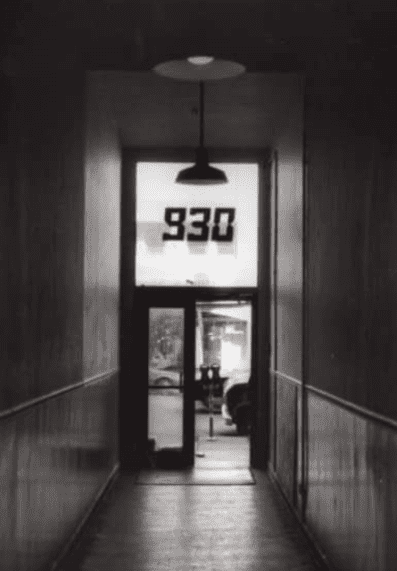 And once you entered the club you were super close to the stage during shows. So close you could take the set list off the stage after show... shake the artists' hands... people sat on the stage, jumped off the stage... it was crazy and flat-out fun.... here's a picture of the main stage room (you can see the stage in the background of this picture): 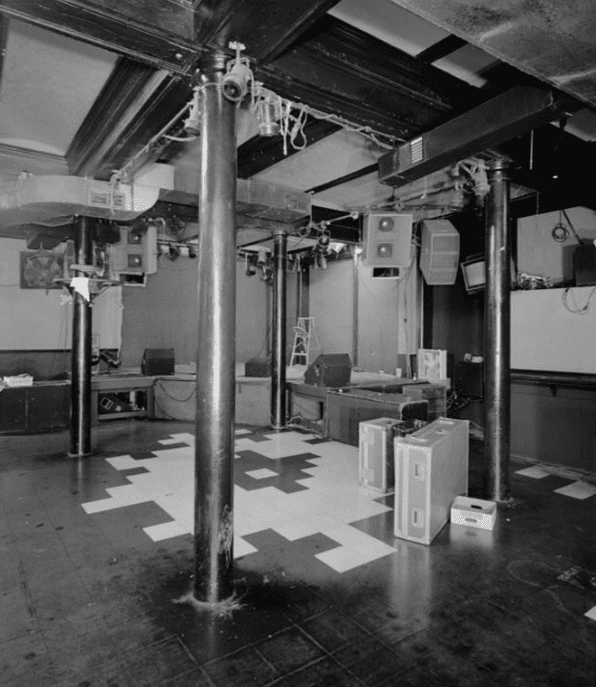 The club had a DJ that played music prior to the show and in-between artists (the DJ booth is in the upper right portion of the above picture). The club always had bizarre videos playing (on hung televisions) with the music... it had this cool factor that I loved as a kid. Also, the dressing rooms were down a generally unmonitored staircase, so you could slip down and get autographs. One night a friend and I went to see a British band called Meat Beat Manifesto (great industrial/techno band way ahead of its time... actually, one of its songs was featured in The Matrix)... my buddy knew the owner of the band's label and we got to slip down into their dressing room to say hello. It just so happened they were opening for Nine Inch Nails that night...and we stumbled upon a young Trent Reznor dressed in an orange astronaut flight suit. He was busy pumping his band up. They rushed up the steps and started their set. The crowd started jumping and it sounded like the floor was going to cave... in hindsight, it was something else.

The dark rat-ridden alleyway behind the 9:30 club (that I would walk down if leaving through the club's side door) is the same alley that John Wilkes Booth used to escape Fords Theater after assassinating President Lincoln. Of course, the cat-sized rats in that alley were not to be messed with!

Wow Todd, those are truly good memories. Places like that simply dot exist here where I live. Wish I had access to a great jazz/blues club here. We have a few but they dont usually feature many great players except during Jazz week here.

Tony.v said:
Wow Todd, those are truly good memories. Places like that simply dot exist here where I live. Wish I had access to a great jazz/blues club here. We have a few but they dont usually feature many great players except during Jazz week here.
Click to expand...

They are... places like that are really hard to find.

I have stacks of tickets for events that I've been to (mostly sports)... and I just dug through it and found a news paper clipping (probably from the Washington Post or the City Paper...). Low and behold it has the concert Nine Inch Nails/Meat Beat Manifesto concert on it... no date on the clipping, by my guess is it's from 1988.

If you're an alt rock fan, you'll recognize other acts: Modern English, The Fleshtones, The Sundays, Concrete Blonde, Psychic TV, That Petrol Emotion, Luka Bloom, The Wedding Present... it seemed like every month they had incredible acts rolling through. Seeing a great show in a 200 person venue is quite an experience! 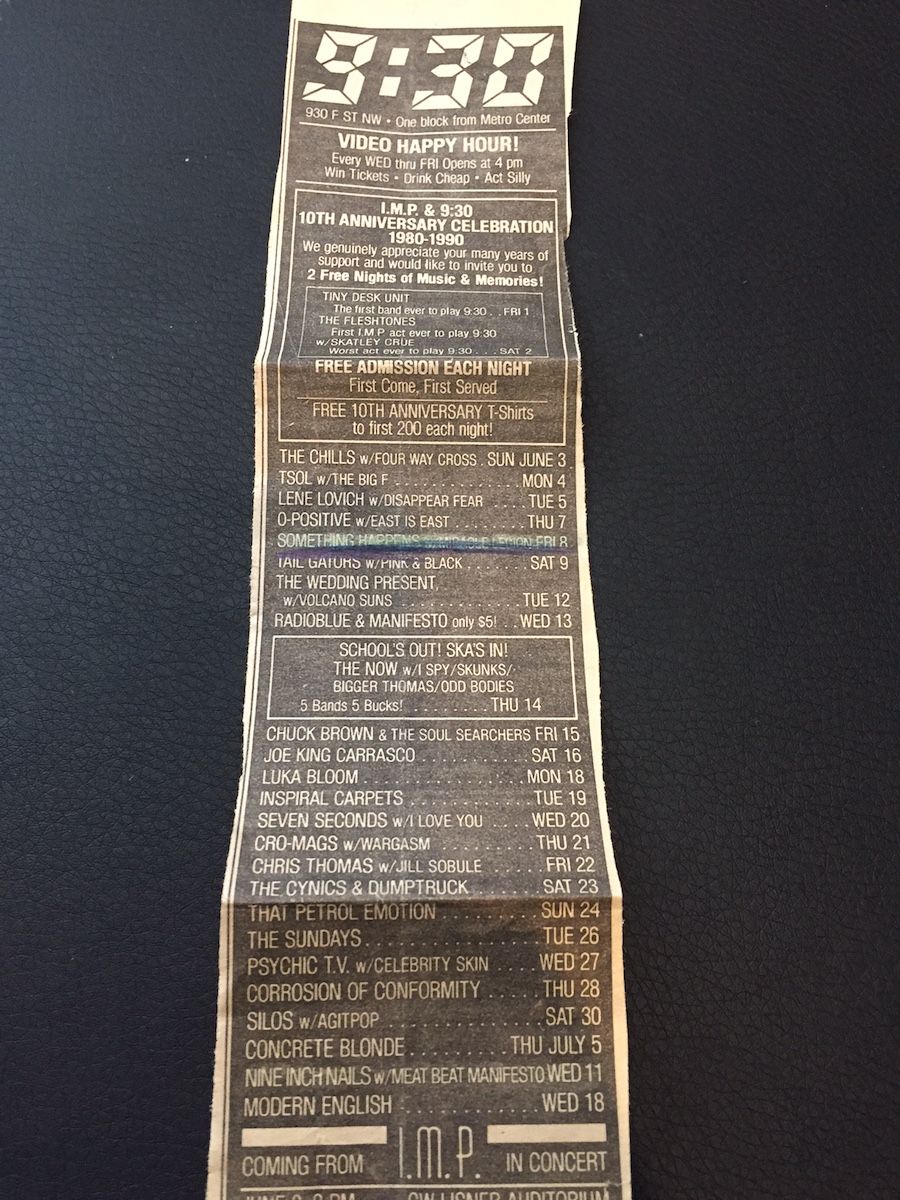 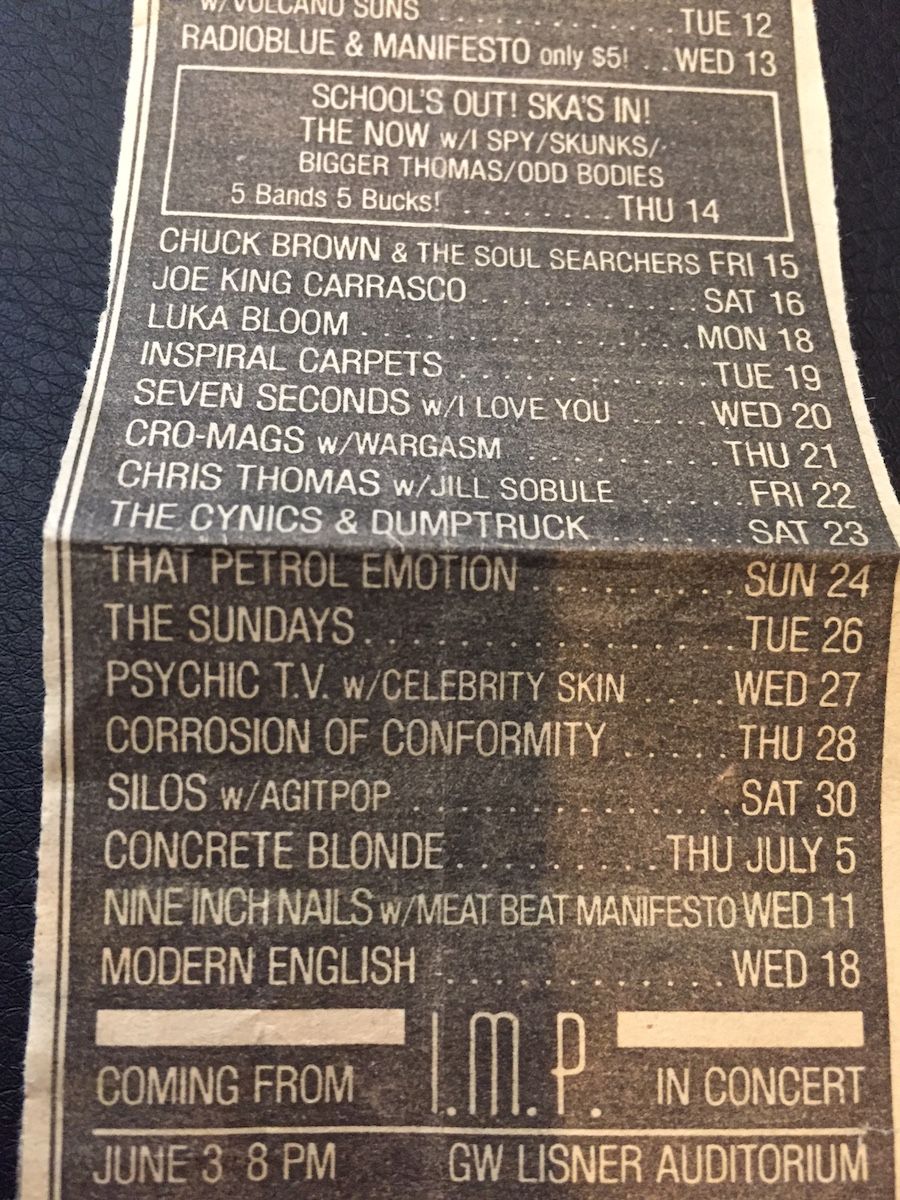 Tony.v said:
I love going to our local concert hall The Winspear I was just recently at a Prince tribute
Wonderful acoustics for live orchestra

Todd Anderson said:
My favorite venue - ever - however, was a total hole-in-the-wall club in NW Wash DC called 9:30 Club.

What a great description!

I feel as if I just spent an evening there. And I think I'd like to despite the smell.

I am also fortunate to live near many music venues, both indoor and out. Two of my most frequented are the The Klipsch Music Center and the Slippery noodle Inn.

The Klipsch Music Center is a giant outdoor amphitheater located in the Noblesville, Indiana. With a seating capacity of 24,000, it’s the largest outdoor venue in the Indianapolis area. The Klipsch Music Center features 6,000 seats under its pavilion and another 18,000 general admission seats in the lawn area. Its massive seating capacity has allowed the venue to host some of the biggest concerts and festivals in the music industry. (Ref-1)

Like Todd, I also have a most favorite venue of all time, called the Slippery Noodle Inn, which has a varied and fascinating history: 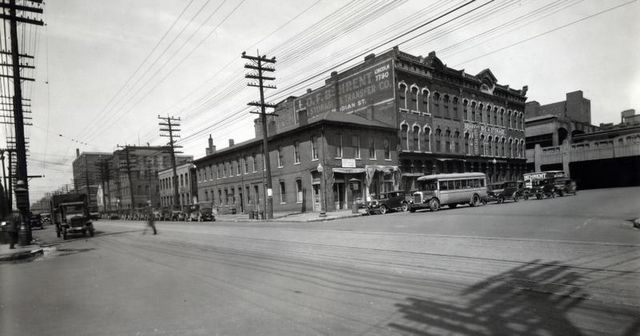 You can feel the heritage as soon as you enter, then pass through, the 100+ year old front bar made of tiger oak. Turn right and a quick left around a dog-leg corner past a small door opening onto the rugged front stage. Now you're in a long narrow hall leading past the kitchen (they serve excellent food, BTW) down a short ramp and into an open, two-story bar and second stage. Get a table on the second story near the edge of the balcony if you can, because of the unique view you'll have looking down into the musicians midsts. 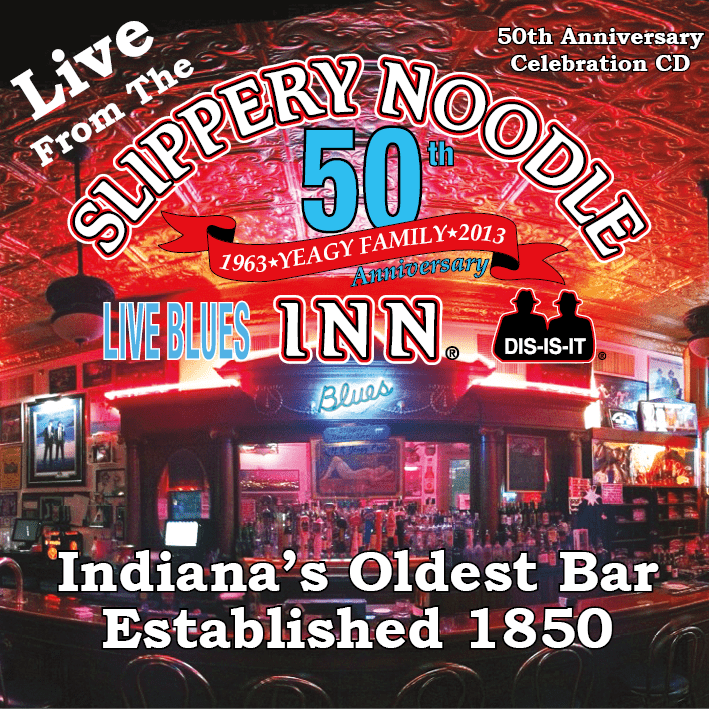 In 2013 To Celebrate the 50th Year of the Noodle in the Yeagy Famly we are recording Vol.

The Slippery Noodle looks like a joint I would LOVE to hang out in... you had me at Tiger Oak!