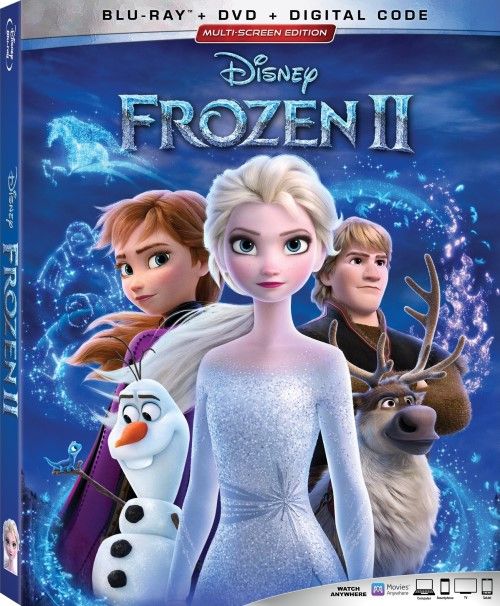 Movie
Frozen was one of my favorite movies of 2013, and is home to one of THE most over played songs in all of music history (you parents know exactly what I’m talking about), and became a worldwide phenomenon (as well as an incredible opportunity to market all sorts of new snow themed toys) with it’s new Disney Princess film. It was funny, smart, and had great songs and great side kicks ala classic Disney fashion. It was only inevitable that a sequel was going to be created (especially in this day and age), and the small shorts and short films that have come out in the interim only barely satiated fans. Some 6 years later we get the sequel, and while it’s still big budget Disney, has a few problems keeping the momentum going. It seems to lack the heart and rhythm of the first film, with songs that are fun, but not outstanding, and a plot that feels a bit rehashed at times.

The film opens with both Anna and Elsa as children listening to a fairy tale about the great northern forest. Years ago, the girls grandfather, King Agnarr (Alfred Molina), had gotten into a misunderstanding with the native people of Northuldra, resulting in the great spirits (earth, fire, wind and water) to become angered and cover the entire forest in a heavy mist that allows no one in. Years later (after the events of the first movie) Elsa (Idina Menzel) is hearing a voice from the great forest. A voice that seems to call and pull her there with every fiber of her being. Along with her sister Anna (Kristen Bell), their lovable snowman Olaf (Josh Gad) and Anna’s soon to be fiance (if he can ever get up the nerve to ask her) Kristoff (Jonathan Groff), the ice queen of Arendelle heads out into the great unknown to find what is calling her.

Luckily for Elsa, her magic ice powers allow her to pass through the mist veil surrounding the forest where they find the Northuldra’s as well as Arendelle guards from years ago living there, trapped in the mist. As Elsa digs deeper and deeper into the search for the truth, she finds a past shrouded in deceit and betrayal, and the answers very well may break her heart in more ways than she could imagine, or else strengthen her to become the force that she was destined to be.

Like the first movie, Frozen 2 explores the darkness of the twin sister’s past, causing them to look inward and find the strength within to carry on, as well as the strength to face the truths that they may not like to see. This sequel is a bit darker, and a bit more emotionally deep, but it lacks some of the fine tuning and the inventiveness of the first film. The songs don’t feel as powerful, and in fact seem to fill in some of the gaps of the story when the narrative seems to be failing. Olaf is cute as ever, and Disney found a new way to market toys with the fire salamander, but the actual narrative feels a bit cliched. The girls go north to see answers, and they overcome their own internal fears to become who they were destined to be. I can’t put my finger on it, but the conflicts the girls face just doesn’t feel THAT impressive, and even the finale is a bit rushed.

Now, that doesn’t mean Frozen 2 isn’t a lot of fun, it most certainly is. The animation is stunning, and the voice acting is still excellent. I still get a kick out of Olaf and Sven the reindeer will always be my favorite side character. The adventures in the water world actually add some dimensions to Elsa’s powers, and the sisterly camaraderie is a treat to behold. The movie may not live up to the fantastic original, but it’s a solid big budget Disney film with great visuals, stunning voice acting, and lots of action for the kids and adults alike.

Rated PG for action/peril and some thematic elements

I almost want to say “perfect picture”, drop the mic and walk away, as Frozen 2’s Blu-ray image is nothing short of digital perfection. The Blu-ray is glorious in every way, with vivid colors, sparkling tapestries of various locations ranging from the gray northern sea, to the earthy woodland, to the bright blues and whites of the snow covered mountains. Outfits are amazingly detailed, with even the ever hard to replicate water looking so vividly real that I wondered if they hadn’t superimposed real world water in place of digital water. The disc is free of banding, crush, or any digital artifacting that I could see with my eyes. Honestly, this is an amazing picture and with such bright colors, and such enormous bandwidth given to the encode, it’s not hard to see why this is pure demo worthy from beginning to end.

In typical Disney fashion you need to adjust the volume level (about 7 DB’s on my receiver) to get full use out of the track as it’s recorded low, but once it reaches references volume the track is actually quite engaging. The vocals are clean and clear, and the surrounds echo with the howling windstorms of Elsa, as well as the constant musical numbers. It DOES, however, suffer a bit on the low end (quite a bit actually) as impacts and thundering giant footsteps are a bit underwhelming. There’s a scene where Elsa is battling the fire spirit that really could have used some low end roar, as well as a tornado that plops our characters from one location to the next. It’s not that the track isn’t full and rich, but that it’s missing the wide dynamic range and rumbling low end that it really could have had in it’s 7.1 glory.

• Sing-Along Version of the Movie – Sing along with your favorite songs as you watch the movie.
• Song Selection – Jump to your favorite musical moments, with on-screen lyrics. Songs include Oscar®-nominated "Into The Unknown," "All Is Found," "Some Things Never Change," "When I Am Older," "Lost in the Woods," "Show Yourself," and "The Next Right Thing"
• Outtakes – Laugh along with the cast of "Frozen 2" as they record their lines, sing their songs and have fun in the recording booth.
• Deleted Scenes – Check out a few scenes that never made the final cut.
-- Intro - Directors Jennifer Lee and Chris Buck offer a glimpse into their filmmaking process with scenes that didn't make the final cut.
-- Prologue - A battle rages between Arendelle and the Northuldra while a mysterious figure challenges King Agnarr.
-- Secret Room - A secret room reveals even more of Anna and Elsa's past, including a shocking revelation about their mother.
-- Elsa's Dream - Anna's playful glimpse into Elsa's dream takes a dark turn.
-- Hard Nokks - Kristoff reveals his true feelings about life in Arendelle when the Nokk won't take no for an answer.
-- A Place of Our Own - Elsa uses her magic to relieve Anna's lingering doubts about their parents' faith in her.
• Deleted Songs – When it comes to "Frozen 2," there can never be too much music. Hear some of the songs that got cut from the final film.
-- Intro - Directors Jennifer Lee and Chris Buck revel in the chance to share a few songs that didn't make it into the final film.
-- "Home" - Anna savors every moment as she wanders through this kingdom she calls home.
-- "I Wanna Get This Right" - Kristoff wants everything to be perfect before he proposes, leaving Anna to wonder, "Will it ever be just right?"
• The Spirits of "Frozen 2" – Cast and crew explore the Scandinavian and Nordic mythology that inspired the spirits inhabiting the enchanted forest of "Frozen 2."
• Did You Know??? – Olaf asks us the question "Did You Know" as we discover "Frozen 2" fun facts, Easter eggs and tidbits about the making of the film.
• Scoring a Sequel – Composer Christophe Beck combines a 91-piece orchestra with 30 choral voices to create the compelling score for "Frozen 2."
• Gale Tests - They say you can't see the wind. Only its effects. Filmmakers give it a shot while creating the playful wind spirit, Gale.
-- Gale Test - A young girl and boy play tag in this fully animated effort to "give personality to something that's invisible."
-- Hand-Drawn Gale Test - A hand-drawn test to bring the precocious wind spirit to life.
• Multi-Language Reel
-- "Into the Unknown" in 29 Languages - Hear Elsa's soaring call to adventure in 29 different languages
• Music Videos - Weezer and Panic! at the Disco lend their voices to a few of the soaring melodies from "Frozen 2."
-- "Into the Unkown" (Panic! at the Disco version) - Panic! at the Disco frontman Brendon Urie stars in their version of "Into The Unknown" from "Frozen 2."
-- "Lost in the Woods" (Weezer version) - Weezer puts their spin on Kristoff's epic ballad, "Lost In the Woods."

Digital Extra Exclusives
• Meet the Lopezes – Meet the award-winning husband-and-wife team behind the incredible songs from "Frozen" and "Frozen 2."
• Deleted Song "Unmeltable Me" - An animatic version of Olaf's celebratory song about his newfound freedom.

​
While Frozen 2 was a bit underwhelming, you have to realize that it had a LOOOOOOT to live up to, as Frozen was a smash hit of epic proportions. Failing at living up the original was a near inevitability, and even though it’s NOT as epic, it’s still a fun Disney movie. The songs are fun, the visuals are sumptuous. And the famous Disney side characters are the life of the party. I really enjoyed my time with Frozen 2 and found it a moderately worthy sequel to the 2013 phenomenon. The 4K UHD disc is absolutely gorgeous to behold on the video front, and the audio is about what one would expect for Disney Atmos tracks. Extras are rather impressive I might add, making this a fun purchase for families who enjoyed the original.

Thanks for the review. We saw the first one in theater and we saw this one as well. I agree, it is hard to live up to the original since it was so good but the second one while, not as great, as the first, was still enjoyable. Worth having in one collection that is for sure.
You must log in or register to reply here.
Share:
Facebook Twitter Reddit Pinterest Tumblr WhatsApp Email Link