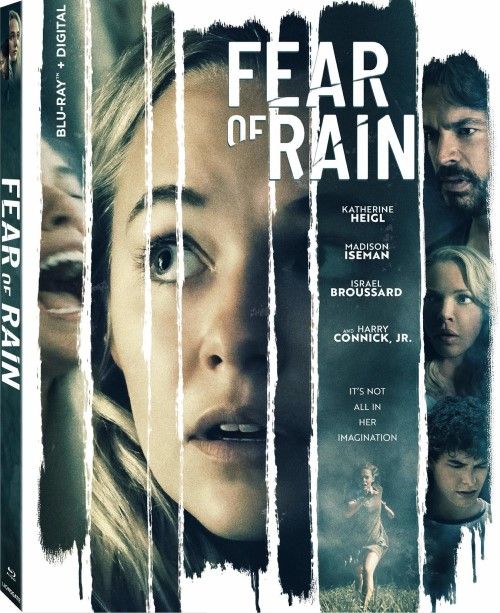 Movie
I was shocked at how quickly Fear of Rain came to home video. I mean, I really shouldn’t have considering that we live in a post Covid-19 landscape for the film industry. I should say that it took me by surprise being that I remember watching the commercials for the theatrical release of the film about a month or so ago, and suddenly it pops up in my mail box from Lionsgate. Back even 1 year ago this type of release window would have been indicative of a low grade B movie that Lionsgate was dumping on the market, but in reality it’s a full feature film with a solid budget behind it. It gave us the return of Katherine Hegil to a major Hollywood film, and gave us a thriller with a little bit of a different “buzz” behind it, even though we’ve seen the basic structure before.

Fear of Rain feels like we’ve seen it before. I caught elements of Rear Window in the storytelling, along with remembrances of A Beautiful Mind (any movie dealing with mental illnesses tends to give us flash backs to that iconic film) as well as typical modern day teenage angst thrown in. The film opens with a scene of our title character Rain (Madison Iseman) being drug off by a mysterious man and buried alive. The only thing is, it’s all in her head as the audience sees a split second later as she’s subdued by hospital staff. Rain suffers from a true chase of Schizophrenia and has gone off her meds again. Given one last chance by her doctor, Rain is allowed to return home with her father John (Harry Connick Jr.) and mother Michelle (Katherine Heigl) as long as she agrees to continue on with her current medication regime.

Poor Rain struggles every day dealing with voices in her head and visual hallucinations, wondering what is real, and what is her mind playing tricks on her. Even if she’s able to go to school and completer her assignments, she’s still shunned by the rest of the school as a freak, leading to an even more introverted struggle. However, Rain finds comforts in the form of Caleb (Israel Broussard of Happy Death Day and it’s sequel), who seems to not care that she’s “different” than anyone else. But to make her struggles worse, Rain believes that one of her teachers (played by Eugenie Bondurant) has kidnapped a little girl and is keeping her hostage next door. Knowing that accusing her teacher of being a kidnapper is going to send her straight to the psyche ward, Rain and Caleb (who Rain is suspicious of being a figment of her imagination) decide to do some investigating themselves and find out what is really going on next door.


Fear of Rain shows it’s contrivances rather early on in the movie, with the actual ENDING of the movie never once in doubt. We know where this film is heading from the second we are privy to Rain seeing the glimpses of the little girl in her teacher’s window. The real twists and turns comes from the point of view of the audience as we’re slowly let in on what is real in Rain’s life, and what isn’t. We’re constantly kept guessing whether Caleb is real (something that’s set up from the moment we see him and Rain runs through her internal list of questions to see if she’s seeing something or not), but the end twist is the one that is supposed to be the biggie. A biggie that really is more confusing when you really think about it. I guess you could say that director/writer Castille London got so involved with creating this big “surprise!” moment that she forgot to make it actually plausible. The twist brings up more questions than it answers, and by the time the film ends it actually leaves the audience a little disconnected from Rain’s struggles. We spent so much time watching her slowly come to grips with her illness and deal with her internal struggles, that the twist seems to bring us back to square one, wondering if she REALLY has a handle on it all, or whether we’re supposed to just accept that craziness and move on.

I can’t find any information about the filming resolution and cameras used for Fear of Rain, but with the budget given and the look of the movie I’d bet my career that we’re looking at some form of Arri Alexa or RED digital cameras. Lionsgate presents the film in it’s theatrical 1.85:1 framing, and the resulting Blu-ray more than impressive. Digital clarity is spot on, with a slightly soft and surrealistic look that gives the movie a dreamy look. Facial details and close up shots look meticulously detailed, with individual hairs and fibers of clothing standing out well enough. The more dreamy sequences tend to be when Rain believes she’s going into a mental and cognitive breakdown state, which is pretty obviously an intentional look. These moments showcase some blurred out details and obvious color banding, but nothing that really stands out to be a major negative for the film. Colors lean towards the teal end of the spectrum, with hints of green push coming through as well.

The 5.1 DTS-HD MA track is no slouch either, giving us a very nightmarish track at times, complete with auditory hallucinations from Rain shifting all around the listening position. Quieter moments are more stable and stereotypically front loaded, but the score keeps those moments from being completely front heavy. Dialog is well placed in the center of the room, with subs kicking into high gear in some of the more hallucinogenic moments. It’s a great mix and one that dots it’s I’s and crosses it’s T’s in regards to make an excellent mix.

Fear of Rain is a solid thriller with some well known contrivances thrown into the plot. I won’t say it’s revolutionary, but having a hero who is schizo AND not seen as a victim by the audience is a little refreshing. Mental illnesses has been tackled in movies before, but usually ends with a rather depressing and macabre note. This film tries to end a bit higher up (despite the problematic twist ending) and features some solid acting job to sell the mixture of surrealistic mystery with teen angst. Lionsgate provides a good Blu-ray release as well, with excellent video and stunning audio to enjoy with just a smattering of extras. I will say this. Fear of Rain is not a B or C level film, but rather a decent mystery that falters a bit in the 3rd act when the contrivances that I mentioned before come out in full force. Recommended as a decent watch.

Thanks for the review. I will check this one out. Heidi has had some serious work to her face.

Asere said:
Thanks for the review. I will check this one out. Heidi has had some serious work to her face.
Click to expand...

lol, that was one of the first things I noticed when she was on screen. pretty obvious