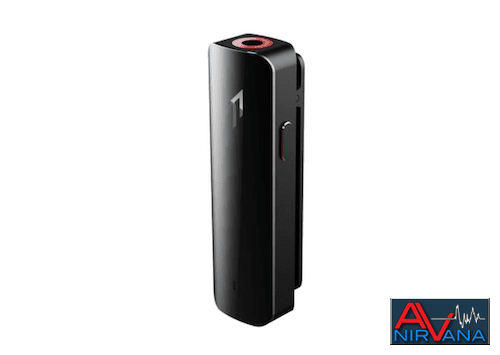 1MORE’s North American presence might be in its infancy, but the company is a giant in the Chinese market, having sold 80-million units during a six-year period before 2020. Thanks to a cache of proprietary technologies and a production process that’s kept entirely in-house, 1MORE leverages economies of scale to deliver shockingly competitive prices. Take, for example, its Hi-Definition Bluetooth Adapter, which sells for a budget-friendly $29.99.

If that price point kindles skepticism, then join the club. Couple a brand that lacks name recognition in the US with crazy low pricing, and there’s good reason to have doubts. Today, we’re taking a closer look at 1MORE’s wireless adapter, judging its build quality and analyzing its Hi-Res wireless capabilities. 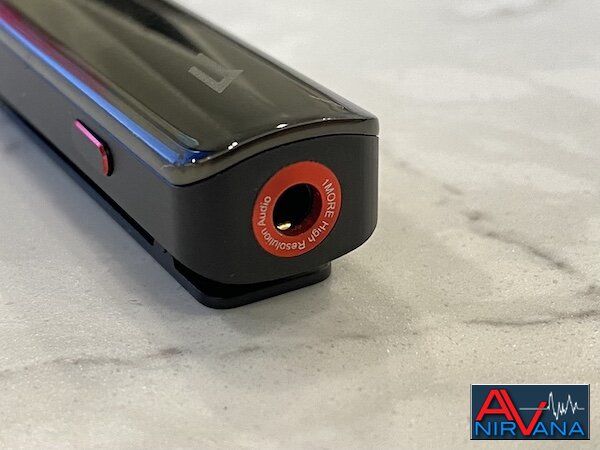 My Hi-Definition Bluetooth Adapter sample arrived in a factory sealed box sized like a deck of playing cards. Packaged in paperboard with a hanging tab, it looked like a product fit for display in an electronics vending machine or on a retail end-cap. Cracking open the box gave birth to a collection of small items, including a multi-language user guide, a short USB to Type-C charging cable, and the adapter itself.

Despite a rather ho-hum packaging presentation, the adapter is quite a nifty device, thanks to an appealing use of materials and a few eye-catching design elements. Its outward-facing surface is silky smooth plastic, while its sides, ends, and back feature a matte plastic material. There’s also a sturdy metal clip attached to the backside.

The adapter’s 3.5mm stereo jack and side-mounted control button use metallic red accents to bring visual flair to the package. Add to that a microscopic inscription around the mini-stereo jack’s surround and a few 1MORE logos, and the Hi-Definition Bluetooth Adapter doesn’t look like a $29 device. 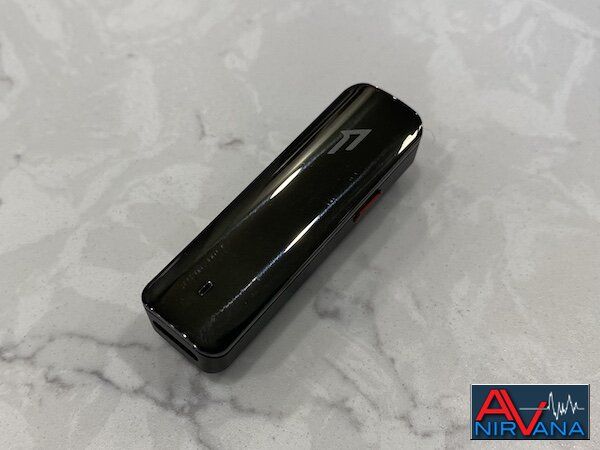 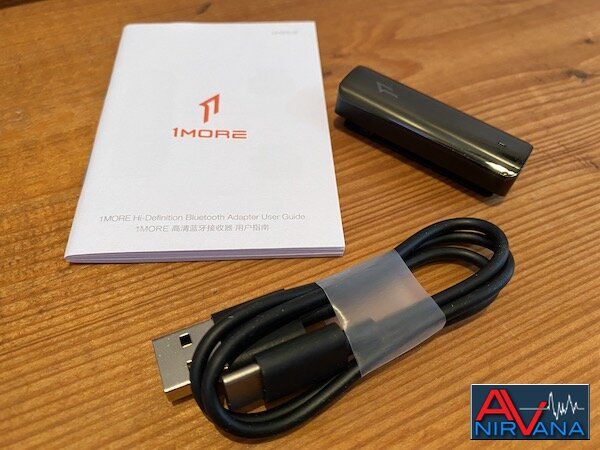 The adapter ships ready-to-play, but I opted to give it some juice before throwing it into my audio chain. Its lone indicator light alternates between white and red, using various flashing and steady states to indicate procedures such as charging, Bluetooth pairing, and turning the device on and off. Much to the credit of 1MORE’s engineers, operation of the adapter is highly intuitive and can be learned through a few minutes of trial and error. Voice prompts are also available once the adapter is connected to headphones.

Set-up is simple; pairing the adapter with my iPhone went off without a hitch, and the adapter’s clip can securetly attach to a pocket, waistband, or button placket. Unfortunately, the clip can't fully close over items measuring wider than an inch, making it less-than-ideal for most belts. 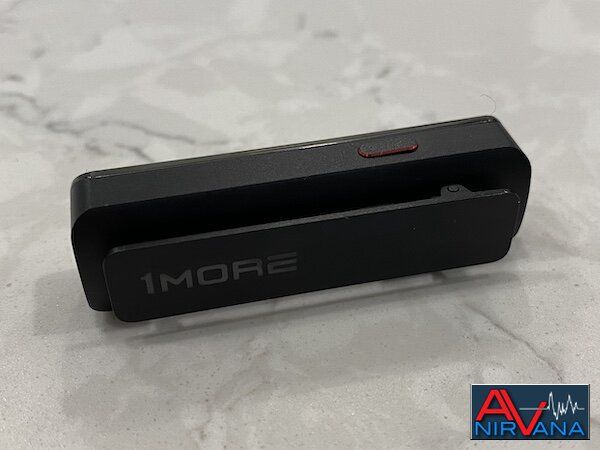 1MORE claims the Bluetooth Adapter has wireless capabilities that extend up to 33-feet, but I was able to coax 50-feet of performance when obstacles didn't exist between the adapter and a source. Any sort of interference (such as cupping a hand over the adapter) at that distance was problematic, so don’t assume you can reliably push the adapter well beyond its limits. In terms of in-home performance, I was able to roam a reasonable distance from my iPhone, walking to adjacent rooms and from my kitchen to an outdoor grill. While not as distance-capable as my trusty Apple AirPods Pro, the Hi-Definition Bluetooth Adapter’s wireless range allowed for a generous amount of freedom. Dropouts associated with roaming too far from a source were handled with quick recoveries – I never encountered a situation where the adapter outright dropped a signal.

For purposes of testing, I asked the adapter to drive OPPO’s PM3 closed-back planar magnetic headphones. Playback sessions were surprisingly good, if not shockingly solid, considering the adapter’s price point. With nary a hint of an elevated noise floor, the adapter took control of the audio reigns and guided the PM3’s into perfectly acceptable audio terrain.

Tapping tracks such as Norah Jone’s “Cold Cold Heart” and “Feelin’ The Same Way” (TIDAL,16-bit/44.1kHz) led to delightful listens laced with definition and balance. There was plenty of pep in the low-end, and volume levels maxed at pleasantly elevated and powerful distortion-free levels. During “Tennessee Waltz” from New Jazz Divas (TIDAL, 16-bit/44.1kHz), Jones’s vocals were fleshed out and loaded with character, as were accompanying stringed instruments, combining for a great audio experience.

The richly detailed baseline in A Tribe Called Quest’s “Award Tour” (Qobuz, 16-bit/44.1kHz) was presented with plenty of texture and punch, flowing with appropriate levels of weight and presence. A similar experience was heard with “We Can Get Down.” The Bluetooth Adapter served as a reliable go-between, allowing me to enjoy my PM3s on the go, without feeling as if I was sacrificing quality.

Lastly, a romp through Deadmau5’s robust catalog of electronica (TIDAL, 16-bit/44kHz) was an excellent way to wrap up listening tests. Intricate songs such as “Strobe -Radio Edit)” and “Three Pound Chicken Wing” were delivered with weight and plenty of throbbing pep, leaving little doubt in the Hi-Definition Bluetooth Adapter’s audio capabilities. 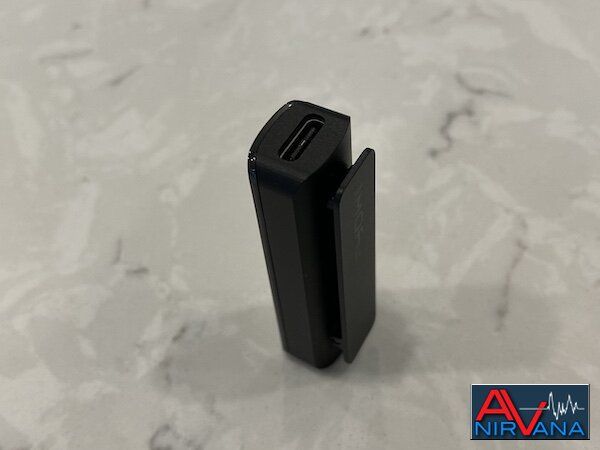 So much for skepticism, 1MORE’s Hi-Definition Bluetooth Adapter is a killer budget device. For $29, you’re given a tool that untethers your favorite wired headphones, injecting listening sessions with crystal-clear audio. While I found myself wishing for a battery life indicator and a way to confirm playback resolutions, those features aren’t necessities. Besides, it’s hard to criticize a product that delivers solid, above-average performance for relatively little coin. Highly Recommended.

If you're looking for wallet-friendly earbuds to pair with the Hi-Def Bluetooth Adapter... check out this review of 1MORE's Triple Driver In-Ear Headphones. They work great together and the Triple Drivers are currently on sale for $63 on Amazon!

If you're looking for wallet-friendly earbuds to pair with the Hi-Def Bluetooth Adapter... check out this review of 1MORE's Triple Driver In-Ear Headphones. They work great together and the Triple Drivers are currently on sale for $63 on Amazon!
You must log in or register to reply here.
Share:
Facebook Twitter Reddit Pinterest Tumblr WhatsApp Email Link