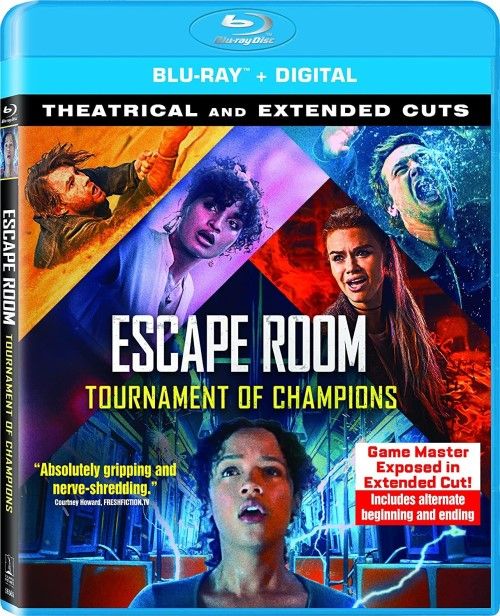 Movie
The proliferation of the escape room phenomenon the last 5-8 years has finally made its way to film. 2019’s Escape Room turned the innocent act of working through a puzzle room into a deadly adventure in a film that blended a lot of Cube with elements of Saw to create a thriller/mystery/horror movie that actually did quite well for itself. I won’t say that it revolutionized the thriller genre, but it was a fairly entertaining “only one can win!” type of suspenseful horror flick. The sequel uses a lot of what makes the first one good, and sort of expands the universe a bit and brings back the “best of the best” for one more game.

Zoey Davis (Taylor Russell) along with rescued friend Ben Miller (Logan Miller) are living lift after having escaped from the deadly puzzle games from the last film. However, Zoey is not just content to let the mysterious puzzle master and his clients get away with delivering the same fate to more unsuspecting people. Figuring out where his base of operations seems to be (using a puzzle, how shocking) the two suddenly find out that the mysterious puzzle master Minos (played by the amazing James Frain) is already on to them. Suddenly they’re thrust back into the world of games, and this time it’s not just with any old people. It’s the winners of previous games who have been stuck together to see who is the best of the best, and now only one of them can survive as usual.

The majority of the movie plays out similarly to the first one. Zoey, Ben and their new comrades have to navigate a maze of puzzles that require them to use all of their brain power and physical skills to escape. HOWEVER, here is where things get interesting. We have both a theatrical and extended cut on the disc, which normally is no big deal as an extended cut adds a few bits of deleted scenes and voila, new cut to advertise. This is the first time in my reviewing history where the extended cut is a COMPLETELY different film than the theatrical cut. I won’t really spoil anything for either cut, but the extended cut is so dramatically different from the theatrical cut that I consider the two almost completely different films.

The changes to the film happen mostly in the first act (which has 10 minutes of brand new footage, with a bunch of scenes from theatrical deleted and recut) and the final act, which takes on a WHOLE different ending to the movie with 16 minutes added and nearly as much cut as well. That ending literally changes the entire villain of the movie, as well as the tone as well. Put them side by side and both cuts are so dramatically different that you almost have two movies on the same disc. Supposedly director Adam Robitel wanted to have his film be another 45 minutes longer, but due to studio cuts, and unnecessary trimming he had to make do with the ending for the theatrical cut, and was able to convince the powers that be to have him recut the film to get as close as possible to his true vision with the extended.

Personally I like the extended cut better. Usually I roll my eyes at extended cuts of most movies as they’re just a few awkward deleted scenes shoved back in, but this one is quite the substantial change. The theatrical cut spends a lot of back story time with Zoey and Ben, setting them up for their inevitable showdown with the game master. However, the extended inserts a whole back story piece for the game master himself and his family. It was a bit weird at first, but that new ending explains it a bit more, even if the “twist” is kind of guessed 20 minutes out for a lot of people. The final act is so wildly different that they’re completely different villains, heroes, and the outcome of the winner as well. The theatrical leaves you with a cliffhanger ending were Zoey isn’t really “out” of the game just yet, while the extended sets up the villain for the 3rd film, if they so deem it, when it comes out.

The 2.39:1 framed AVC image shows very little room for complaint. The digitally shot production translates well to Blu-ray with a dark looking image that makes good uses of the almost neon shades of light color throughout, as well as exceptional detail levels. As mentioned, the film can get VERY dark depending on the locations, but also showcase bright and honey saturated daylight shots (such as the over exposed look of the beach). Colors are fairly muted except for the overly bright neon shades from the various lights in the underground puzzles. Black levels are really REALLY good, with me only noticing banding and some crush a few times. Detail levels maintain a high standard of quality, and overall this is as great of a transfer as the previous film.

The 5.1 DTS-HD MA track is about as good as the video is, offering one intense listen. The track can be very quiet and forward heavy when it comes to the dialog scenes, but also has an INTENSE score that really fills out the surrounds and bass when things get exciting. Not shocking, as the film was mixed by none other than Kevin O’Connell, one of the most celebrated sound mixers of our time. It’s a tour de force mix with just the right amount of quiet, and tons of highly localized activity when the games traps are under way. Bass can be punishing when called upon, but also subtle and nuanced when it needs to fade into the background for a more dialog centric scene.

Is Escape Room: Tournament of Champions a great film? Nah, but it’s kind of like Cube meets Saw with a more sanitized PG-13 violence level to it. I’d say the franchise leans more towards mystery and thriller categories than true horror, but the whole “do you want to play a game?” aspect of it with death at the end really brings back memories of the Saw franchise (just not nearly as twisted). All in all, I kinda like these two films as fun creepy thrillers. They definitely require some suspension of disbelief and the plot holes require you to look the other way, but they’re very atmospheric and fun. Especially having played my fair share of escape rooms (my wife actually is game master for a local escape room in town, which means I’m the guinea pig when they change something or add a new room). The Blu-ray is fantastic in terms of video and audio, but the extra are a tad weak. Fun watch if you like the trailer.