Epson has finally released it's replacement for the much celebrated 5040ub/ube line of projectors. I took that opportunity to update my 5040ube to a 5050ub and I'll post my calibration narrative here. All of these readings below are using SDR mode to measure except for Digital Cinema. Digital Cinema and Cinema are the two modes which engage the color filter to get expanded gamut coverage. The other modes do not engage that filter. In hindsight, I probably should have gotten some HDR readings from Cinema mode but from my experience with the 5040ube I've found that Digital Cinema is generally the much better mode for HDR. 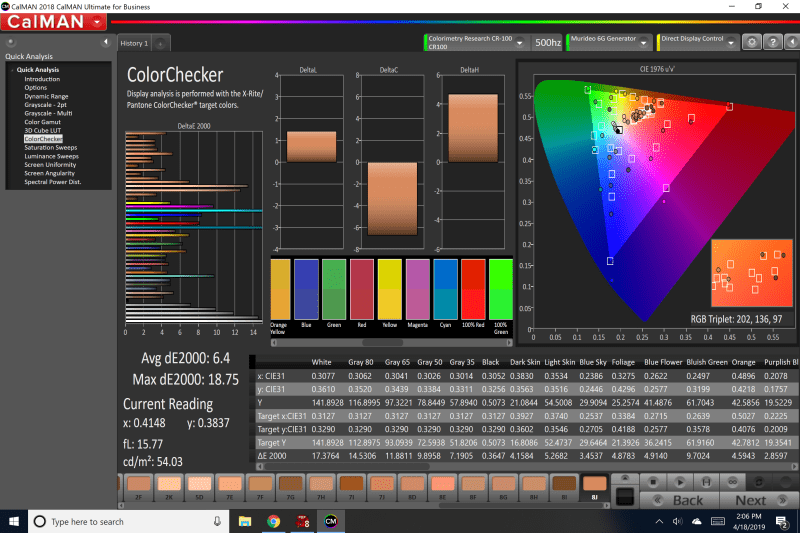 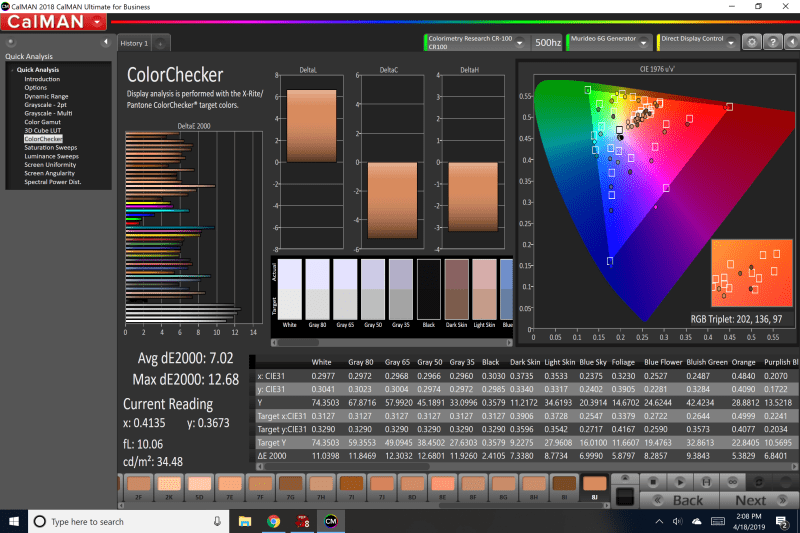 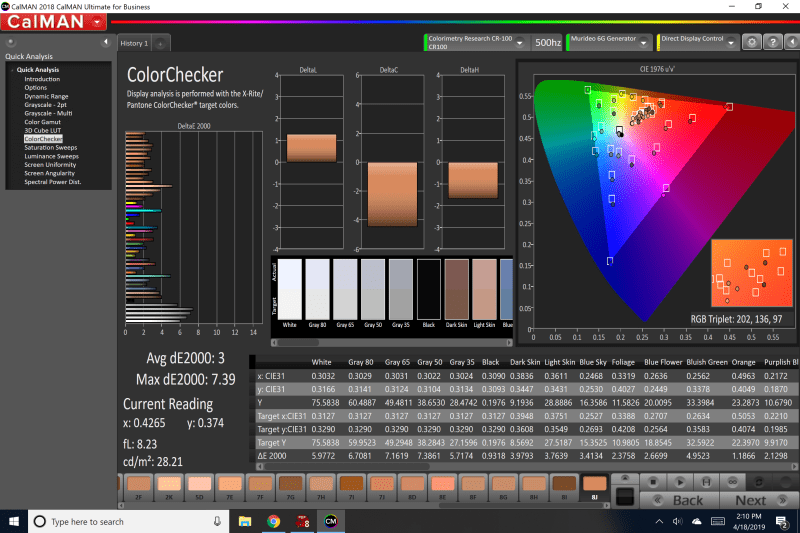 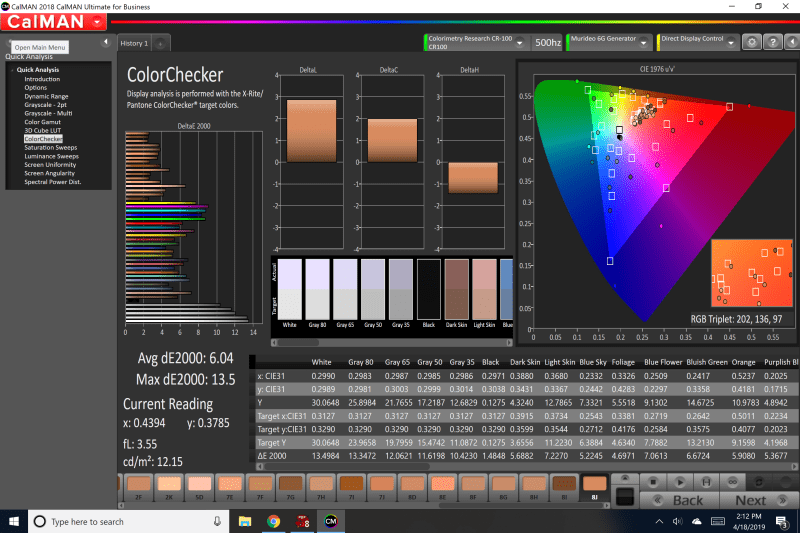 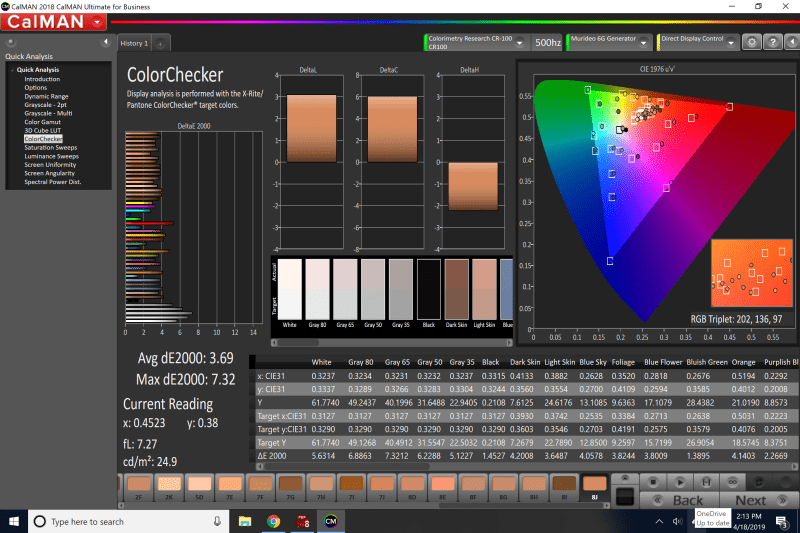 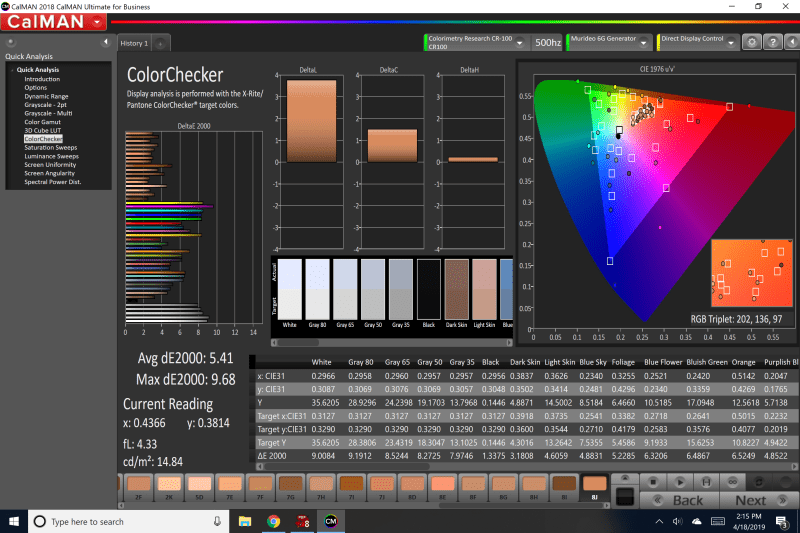 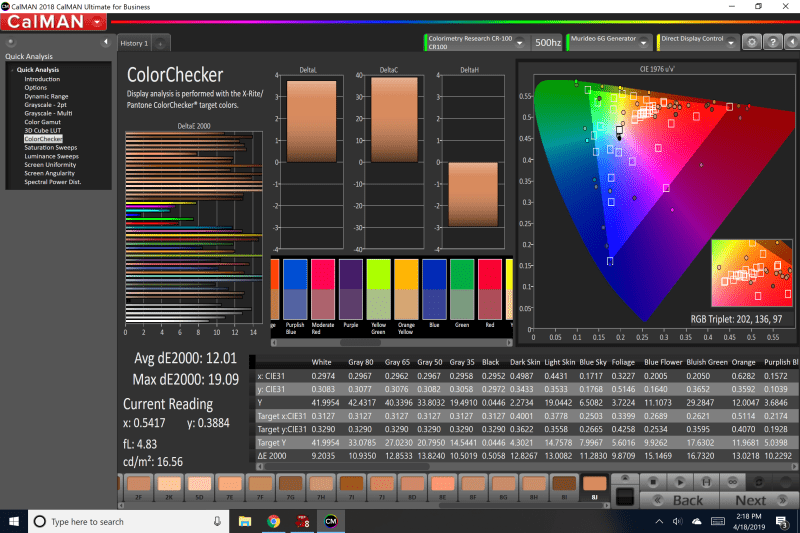 Epson HC5050UB
Looking at the numbers, Natural mode looks outstanding out of the box for SDR with a DeltaE of 3. The rest of the modes look to fall within the realm of what you would see with similar displays out of the box. 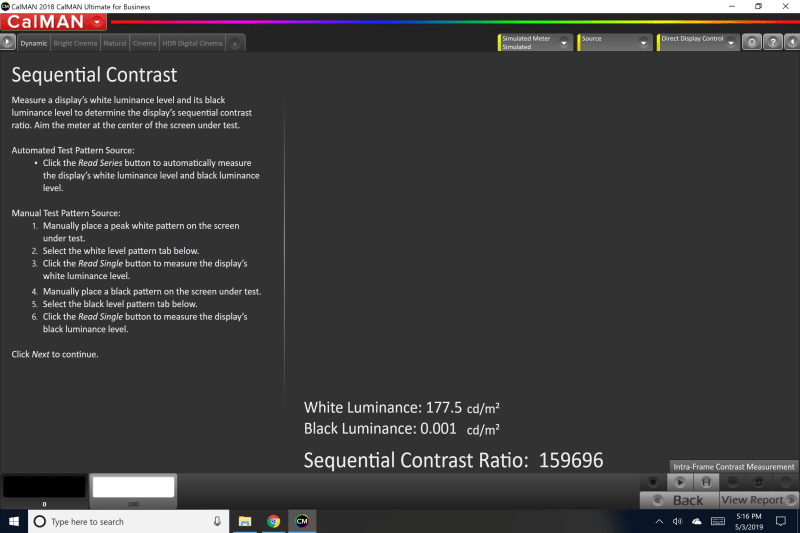 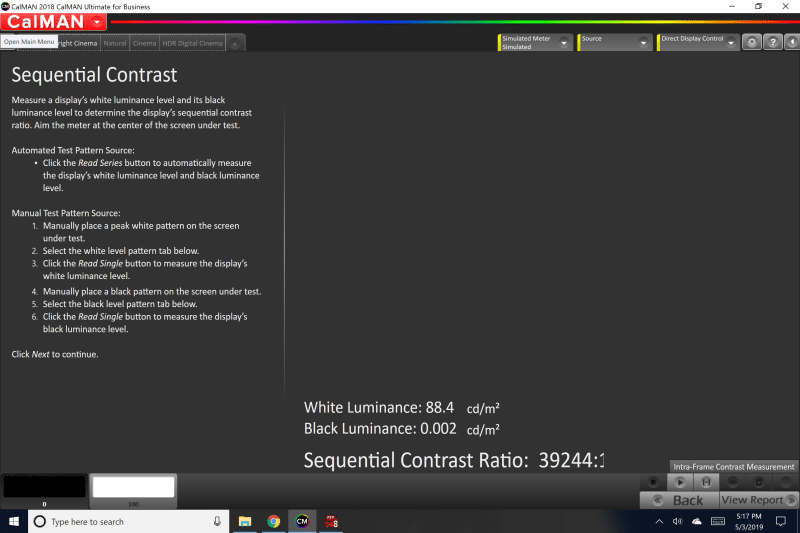 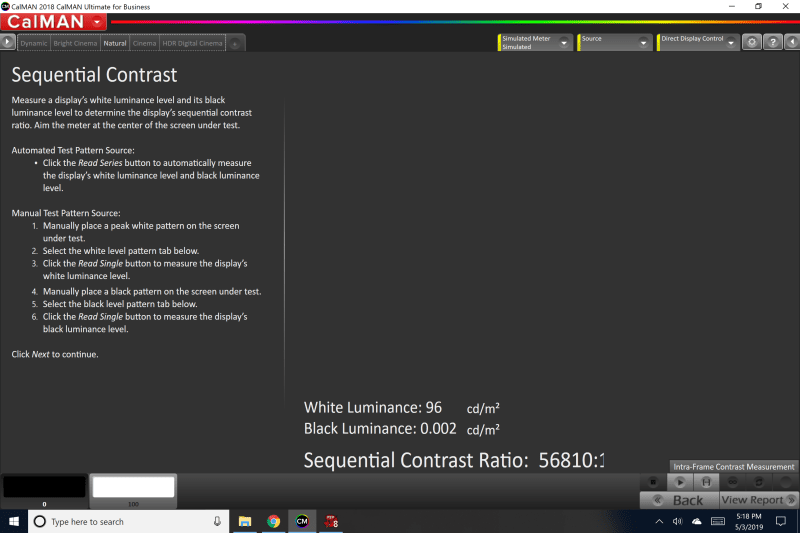 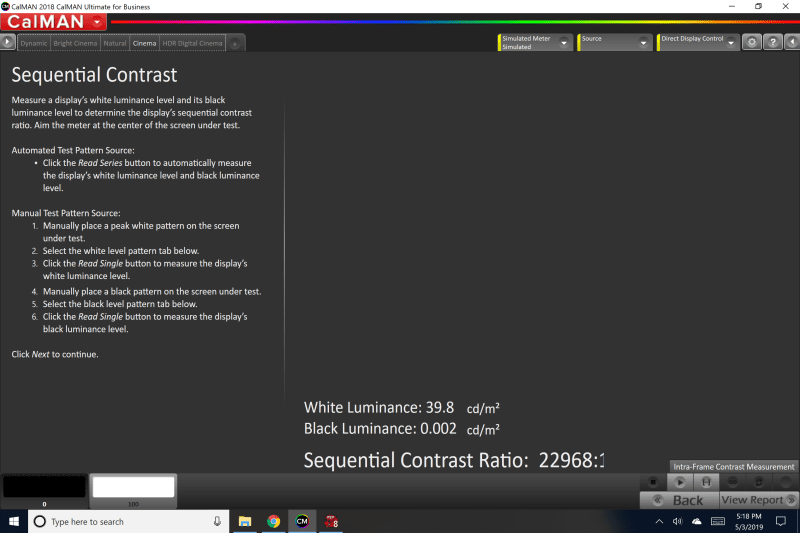 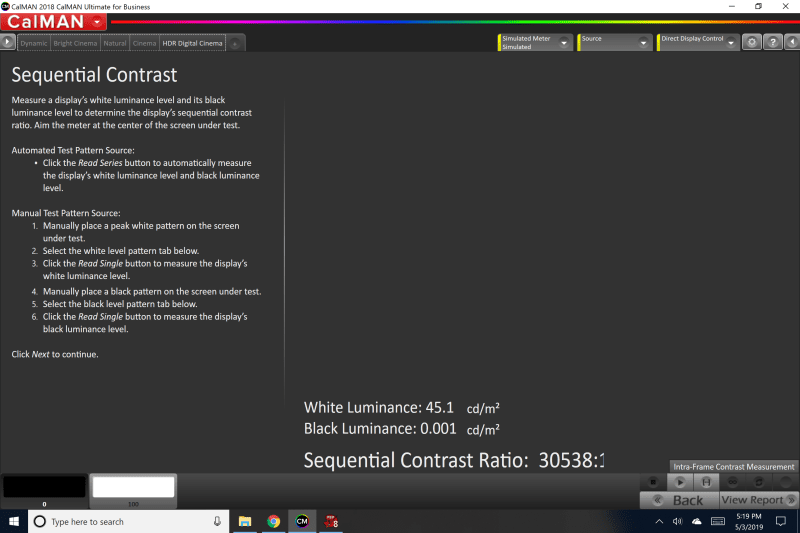 Epson 5050ub Contrast Ratio OOTB
These are out of the box values - non-calibrated. I'll wait until the 5050ub has around 200+ hours on it before I even think about calibrating it.

Some of the things I have noticed so far is that the 505o has a HDR button on the remote which when pressed brings up a HDR slider. The slider has values from 1-16 with the lower numbers being brighter and the higher numbers being darker. I've tended to adjust it as needed but it seems that it is generally anywhere from 6-8. The default value is 8. There's also a new grayscale calibration feature. There is still the old RGB Gains/Offsets under 'Custom' in 'Color Temp'. Now there is also a menu item titled 'Grayscale' just below 'Custom'. It includes 8 step grayscale calibration that includes adjustments for Red, Green, Blue and Brightness. I haven't played around with this at all and I'm not quite sure what 8 steps Epson has included for calibration but it is a step forward and the should be commended if this feature functions properly. Outside of that, I haven't noticed anything that stands out to me as different from the 5040ube.

Looking forward to reading impressions and seeing some post-cal measurements!

Installed CalMAN 2019 the other day and I figured I'd better get a Color Volume check on this new pj. 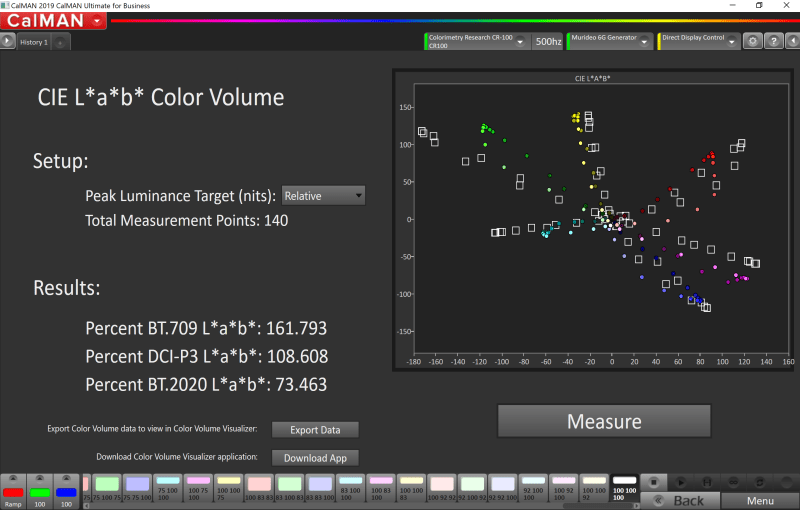 Projector has 97 hours on it and I spent a 2-3 hours calibrating HDR10. I've found that the best results calibration-wise and film content are to have the HDR slider at 10. When I watch hockey however, as I am now, that's too dark and I slide it up to 7. Here are the calibration charts from CalMAN - Digital Cinema mode: 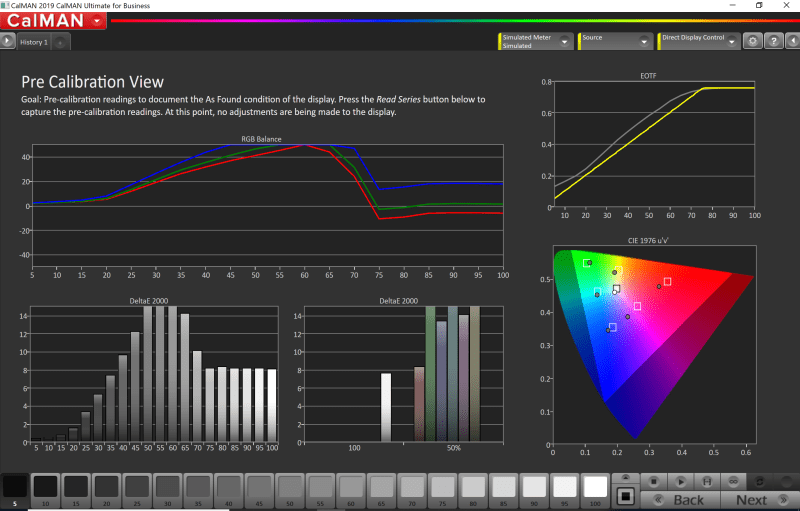 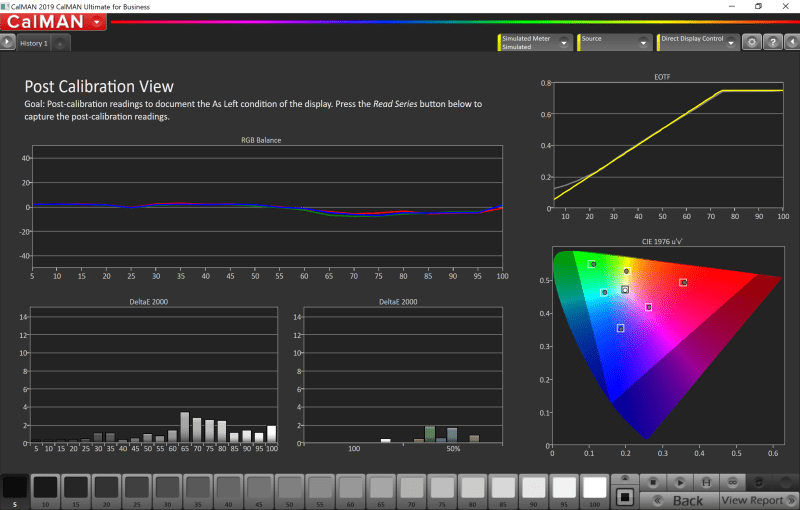 I just checked the hours and I'm at 253. I'll be doing a full calibration on it this week and I'll chronicle it here in this thread. I'll also have to make some tough choices as to whether I want the expanded gamut that Digital Cinema offers or the brighter image that Bright Cinema offers. Each can do their own thing but neither can do them both.

niiiiiiiiiiiiice. I'm in the market (hopefully) to replace my JVC RS46 sometime to a 4K (ish) projector, and the 5050ub has been on my radar. Glad to see it's an actual improvement and not just a repackaging. that light output is pretty impressive.

Epson is the best thing going on if you’re looking to spend less than JVCs top three lamp-based 4K models.

Hang tight, tho, Mike. JVC *might* have some big announcements at CEDIA!

You might be able to get one or two models reviewed in the used market... but unlike used JVC 1080p projectors, you'll be left to deal with older HDR content.

I should get some hands on with the new Epson gear in about 2 weeks. I'll let you know what I think!

Yeah. The older hdr tech was my worry for going used. The new advances in hdr and Dolby vision are what really makes these new ones...I'm willing to give up a few things if the display has proper hdr and good black levels (been spoiled with jvc black levels that's for sure lol)

I’m still trying to find time to get to calibrating my 5050. Life has been busy lately and it’s been getting pushed back.

The one thing that sets this model back is that you have to accept the trade-offs. You can get full P3 color, but at a big hit to brightness. You can get solid HDR brightness, but you don’t get full P3 coverage. When I calibrate mine I intend to calibrate both a full P3 mode (Digital Cinema) and a high brightness (Bright Cinema) mode and I’ll probably switch between those two depending upon content.

Looking at post #5, the HDR post cal grayscale readings are seriously off. Either it took SDR readings or something is terribly amiss. The line should look more like the pre-cal readings but with the red, green and blue lines being much tighter.

Don't know why I never saw that originally but I should have caught that. Either later today or tomorrow I intend to calibrate the 5050ub. I'll put it all here.

you're forgiven. but only this once. Next time beatings ensue

Michael Scott said:
you're forgiven. but only this once. Next time beatings ensue
Click to expand...

I can't believe (actually I can...) that I put that up there. Better charts coming today.

I've never seen the 4040 in person but it's my understanding that the 5050 has more lumens. But the lumen advantage may disappear for HDR. Not sure how the 4040 handles wide gamut color but the 5050 engages a color filter to hit the wider color gamut. Brightness takes a pretty decent hit with the filter engaged (Digital Cinema or Cinema mode).

I wonder how that will work with the Panny UB9000 and all that HDR stuff.

Figured for sure you'd buy a white one and spray paint it black.

Well... it did cross my mind... or just buy some black velour and a can of 3M spray glue... or even better... wrap it in black duct tape.

It would give it that custom look and feel!

Sonnie said:
Well... it did cross my mind... or just buy some black velour and a can of 3M spray glue... or even better... wrap it in black duct tape.

Got my Pro Cinema 6050 ordered today. Looking forward to getting it in and seeing some improvements.

Sonnie said:
Got my Pro Cinema 6050 ordered today. Looking forward to getting it in and seeing some improvements.
Click to expand...

Did you get it setup yet?