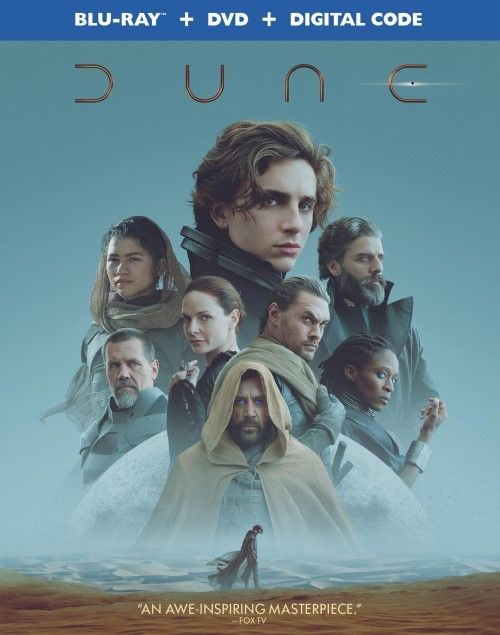 Movie
Dune has been a notoriously hard book to adapt to screen. Along with Lord of the Rings it is considered one of the most seminal pieces of sci-fi/fantasy out there, but is also notoriously problematic when being brought to film. A massively dense novel (though nothing compared to the sequels), Dune has been tried multiple times. The first being Alejandro Jodorowsky’s failed attempt to bring the book to light, then the infamously campy David Lynch film. A film so epically crazy and bad that it has garnered a cult following despite the fact that it is so far removed from the actual novel as to almost be in a different universe. Back in 1984 the technology to do the film’s visual aesthetics justice just wasn’t there, not to mention the move was just a gigantic cluster bomb of studio vs. directorial visions, which ended up just gutting the movie. The 2000 SyFy miniseries wasn’t actually half bad, even though it was mainly hamstrung by budget and an attempt to keep it palatable for the masses. However, it was also the most book accurate portrayal at the time, even though it was no masterpiece (the sequel which tried to do the 2nd book was met with a less charming fate though).

Dune is a tough book to adapt, and for good reason. I could go into a 12 page essay on the history and thematic elements of Dune and it’s sequels in an attempt to explain why (I actually re-wrote this review several times because I was waxing on too long about the history and reasons why), but needless to say it’s sort of the anti “Lord of the Rings” if you will. By that I mean that while Tolkien crafted a low technology world with good vs evil, white vs. black, heroes vs. villains….Dune is exact opposite. Frank Herbert was obsessed with the futility of creating a super human (something mankind was talking about philosophically for decades during his life) and his nihilist leanings made him delve into what would happen if humanity truly was doomed, and what it would take to set human kind back on the right path. There are no heroes, there are no villains, just a fascist reality where humans do what humans do for their own reasons. As such we are born a “hero” in the form of Paul Atreides (Maud’dib as christened by his desert dwelling brethren). A world where someone has to see the future even when no one else will, and do the hard things to set the world on the right path, even if he has to become a monster to do so.

The world of Dune opens up with the introduction of Duke Leo Atreides (Oscar Isaac) who has just been given control of the world of Arrakis from the evil and twisted Harkonen. The world is much different than what you and I would imagine the world would be. However, It wasn’t always that way. We went to the stars, we created gigantic machines to do things for us, and humanity lived the life we had envisioned. That is until humans got stagnant and was only stirred from their stagnation by a war against artificial intelligent machines. Humanity went a different path, eliminating computers and AI from our lives, going so far as to genetically craft humans who could compute and calculate as fast as computer known as Mentats (you see them in the film, but they’re not explained as thoroughly as the book). However, we have once more stagnated after 100s of thousands of years of existence, with factions of humanity only held together by the domination of the Emperor and his forces. And this is where we enter the picture. House Atreides being set up for failure due to the Emperor fearing Leto and the public support he wields. Thus the jealous emperor sends house Atreides to take over the production of spice (a hallucinogenic substance only found on Arrakis created by giant sand worms). A substance that allows for some portions of genetically modified humans to allow for prescience and the ability to use space travel (the space guild, although that is only barely mentioned here). It quite literally is what binds humanity together as a single unified species, and without it we would fracture and die off (something which is explored HEAVILY in the sequels). While Leto and his Benegessirt (a caste of supernaturally gifted witch like women with their OWN agenda) consort (Rebecca Ferguson) think that this is a gift form the Emperor, we know that it is actually a setup. The Emperor rightfully assumes that the ousted House Harkonnen will wage all out war on House Atreides, and wipe them off the face of the earth without the public knowing that Emperor had any involvement.
.

I could go into soooooooooo much more detail about what’s happening as an avid fan of the book, but lets just say that it’s best to watch what unfolds rather than have me explain the rest. I was initially worried about the film’s production, but with the inclusion of Denis Villeneuve as director and co-writer I was a little less hesitant. The man has done incredible work with Sicario and Blade Runner 2049, so I wanted to see what he would do with the book. It was almost till theatrical release when rumors were finally confirmed though. Villeneuve and Warner weren’t adapting the first book in whole. Instead they played the long game and risked it all by only adapting the first 30-40% of the book, ending right when Leto’s son Paul (Timothee Chalamet) and his mother escape the Harkonnen devestation and head off into the desert. The rest will be released at a later time (now confirmed as 2023). This was a HUGE risk, being that if this movie bombed, we’d never see a completion to the first novel and would probably be ridiculed as just another failed attempt. Luckily sci-fi fans ate up the movie like starving wolves, pretty much confirming that we’d complete this one, and POSSIBLY see a third one according to Denis Villeneuve.

The movie plays things close to the vest, unveiling the story ala the book, just without all of the copious amounts of narrative backstory that Herbert crammed into the book. We get an idea of the twisted nature of the Harkonnens thanks to Stellan Skarsgard and Dave Bautista (who is surprisingly tame and well used considering he’s not a great actor), and Tomothee Chalamet nails it as young Paul. A man who is well trained, optmistic, but also realizes that his life is changing into something that he’s not ready for at the same time. The movie teases us with the reveals about the Benegessirit and Mentats without just exposition dumping, but there is are several minor flaws. The first comes in the form of the narration. It ends so abruptly that unless you realize that this is simply a part one, will rub you the wrong way. The second is Zendaya and Jason Momoa’s acting. Zendaya gets maybe 5-10 minutes of screentime so it’s hard to see how she’ll do as Paul’s consort Chani, but I wasn’t too impressed with her. The other is Jason Momoa as Duncan Idaho. Fans of the book already know too well how he will be a MAJOR part of the sequels, and is an iconic character (to trim things up nicely, the only HERO in the entire Dune universe is probably Duncan Idaho) and Momoa plays Duncan like he does all his characters. A gravely voiced hulking hunk of muscle who kind of emotes himself as a dude-bro.

All that being said, Dune ended up being excellent. It may not be the best movie of the year, but it was a nearly flawless adaptation of the book (as much as it covered). The tone, the aesthetics, the acting, they all just oozed old school “Dune”. I haven’t read the book for about 5-6 years, but if you’re at ALL a fan of the book, then this will tickle you pink with glee. Newbies will still be able to digest the movie quite well, as it doesn’t just throw all the INSANE bizarre crazinesss from the book on screen and expect you to just swallow it. Things unfold naturally, allowing the viewer to get deeper and deeper into the lore until you realize that the movie is ending.


Rated PG-13 for Sequences of Strong Violence, some disturbing images and suggestive material

The Blu-ray looks really good, but still pales in comparison to the exquisite 4K UHD disc. Colors are subtle and nuanced throughout, with a murky and sandy look that mixes blue/grays and dusty colors equally. Night time or darkness enshrouded scenes are copious, and I noticed that the disc struggled with some of it. There’s a few grain spikes, and the detail levels during the darker shots (such as when the Benegesserit are making plans with the Harkonnens) I noticed some mild smearing. However, this is still an excellent looking release, with great detail levels, minimal banding and will certainly show off your home theater system quite well.

Just as impressive is the Dolby Atmos mix found on both the 4K UHD and Blu-ray discs. The video was a show stopper, but the audio simply tears down the walls. This is one of the most dynamic and vibrant sounding mixes that I’ve heard. The opening scenes with Paul and Leto on the cliff showcase whispering winds that flicker from one end of the surround setup to the other, but when the powerful score and action starts kicking up later in the film it will bring you to your knees. The hummingbird jumpers that they use to get around with pulsates and throbs with visceral energy, and the bass response is absolutely absurd at times. I’m not talking over cooked hot bass, but really smooth, REALLY powerful, and also really balanced in how its integrated with the rest of the film. Honestly, this is one of the single best mixes I’ve heard in years, with perfect dialog and a surround sound stage that is awe inspiring. The overheads get some nifty use during the battle, as well as during the worm encounter or anytime the jumpers come into play. Wowza.

​
Dune is an excellent sci-fi/fantasy flick that actually does the book justice for once. It’s filled with an INCREDIBLE array of actors (seriously, everyone from Oscar Isaacs, to Jason Momoa and Josh Brolin) and great performances all around. The only negative thing I can take away from it is that the whole “part one” thing means we’ll have to wait another 1.5 years before we can finish the novel (I’m still curious if the sequels will be made, as it takes the “hero” element of Paul and turns it on it’s ear. Something which Hollywood is usually loathe to do). The Blu-ray has a hard time standing up to it's perfect looking 4K UHD counterpart, but this is still an excellent film that holds up very well on Blu-ray. Great watch.

Thanks for the review. Glad it held up to the book. Will check it out. Only drawback is that we have to wait till next year to see the next part...

Yes- Thanks for the review! I need to see this one. This is the third review I’ve seen this week that said the Atmos track was amazing. Others said it’s now on their top ten for Atmos.
You must log in or register to reply here.
Share:
Facebook Twitter Reddit Pinterest Tumblr WhatsApp Email Link