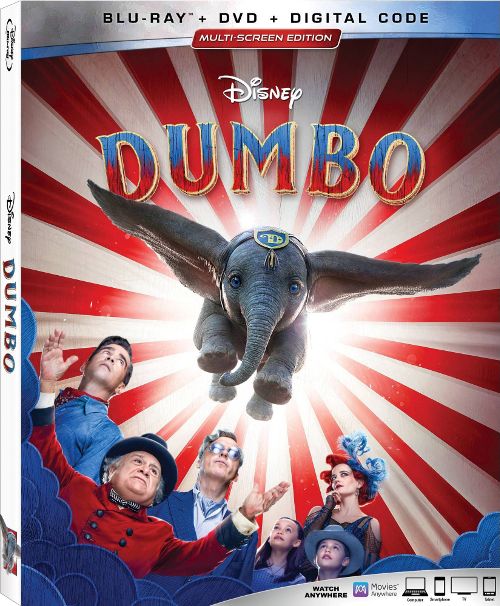 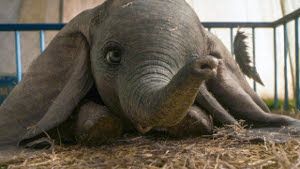 Movie
The last several years have been a bonanza of live action adaptations of classic Disney animated stories, with titles like The Jungle Book, Aladdin, Beauty and the Beast, and Cinderella being retold without the animated trappings, and usually heavily expounded upon. We have The Lion King to look forward to in a little bit, and Hercules is supposedly right on its tail from Disney announcements. Which leaves 2019 with one of the oddest live action spectacles of them all, Dumbo. Now the animated Dumbo is a film of controversy, as you either loved the film and its oddities as a kid, or you were put off the theme of the movie which seemed to state “if you do something special, everyone will finally like you!”. Now, I fall into the latter half of that opinion scale, and through it was one of the most depressing and poorly thought out stories from the golden age of the Mouse House. The story was almost mean spirited in how poor Dumbo was treated, and it wasn’t until he gained confidence and bloomed into a flying elephant that everyone ended up loving him. Now, re imagined for the modern age, with all of the digital trappings one could hope for, the live action Dumbo turns out to be a turgid film that is heavily bloated and lacking the charm that the original animated classic enjoyed (even though that charm was bittersweet).

Instead of having talking animals like they usually do, Disney sort of rebranded Dumbo for the modern day and puts the focus directly on the humans. Instead of being a timid little creature with big ears, Dumbo is just an oddity of nature. He’s born to an Asian elephant in a little circus run by a little man named Max Medici (Danny DeVito). With his large ears Dumbo is seen as a liability, but after the elephant trainer Holt Farrier’s (Colin Farrell) kids discover he can fly, Dumbo is catapulted to the top of the circus’s ranks as the main attraction. However, the little po dunk Medici brothers’ circus is not enough to fully capitalize on Dumbo’s special ability, and is wooed into striking a deal with the largest circus producer in the United States, one V.A. Vandevere (Michael Keaton).

Soon upon arriving at Vandevere’s enormous Dreamland Circus, the Medici members realize that Vandevere has other plans up his sleeve for the flying elephant, and none of them included the poor circus performers from Max Medici’s contribution to their partnership. Realizing the tycoon’s plans almost too late, Holt Farrier and the rest of the Medici family have to come up with a way to get Dumbo and his mother out of Dreamland and away from Vandevere before it truly is too late. 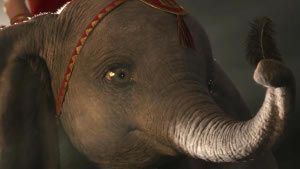 Dumbo is sadly a very bloated film (the exact opposite of it’s extremely short animated predecessor) that is slogged down with too many side stories from the original film. The original film had Dumbo learning how to gain confidence in himself in order to shine at the circus. The move was about his struggles and trials to GET to the top. This one become over ambitious and tries to string together the main themes of the original movies, but also segues off into a myriad of side stories about the other circus performers and ends up clocking in at almost 2 hours long, while feeling nearly twice that. The story is at its best when it’s exploring the relationship between Holt, the French trapeze artist Colette (Eva Green) and Dumbo, but outside of those brief moments the film struggles under the weight of having too many villains and too many side jaunts.

Everyone does a good job, but Michael Keaton really shines as the mustache twirling Vandevere. Keaton has been on a fantastic reimagining of his career and has been taking center stage in everything he does. Sadly this villainy is over shadowed by stories of animal cruelty, preachy animal activism, and just TOO MUCH stuff going on at once. Dumbo worked really well as a simple animated story, and that’s where Tim Burton’s film goes off the rails. It’s anything BUT simple. Burton uses his favorite actors and actresses to great aplomb, but he just tries too hard to make Dumbo 2019 into a giant extravaganza rather than a simple tale of confidence and rebirth. The movie really tries to incorporate all of the elements of the original movie (even the Hefaflumps and Woozles scene), but those elements get lost in the sea of extraneous plot lines and flights of fancy that Burton includes in the movie. 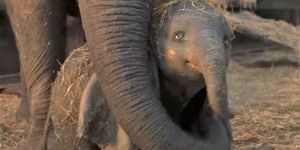 Shot entirely on digital cameras and transferred to a 2K digital intermediate for the home video release, Dumbo looks excellent on Blu-ray. The film is given a dingy and dim look to it, with grays and earthy browns abounding on the screen. Still the clarity is razor sharp and the digital wizardry looks exquisite on Blu-ray (interestingly enough, the 4K UHD disc shows a bit TOO much and the CGI stands out a bit more on that disc). The period piece costumes are garish and brightly lit, adding layers of red, orange, green and blues (such as the mermaid’s costume) that really pop off the screen. Facial details are impeccable, showing every line on Keaton and DeVito’s faces, as well as the grime and grunge that Holt is covered with as he mucks the elephant stalls. The image is never flat and dull, and the disc only has a few issues with problematic black levels in some of the darker shots. 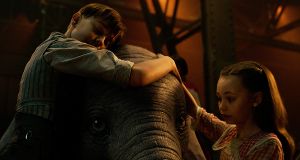 Disney has had a problem with neutered audio mixes over the last 5 or 6 years, with anemic bass, a cramped dynamic range, and generally being recorded at lower volumes than many other Blu-rays and 4K UHD discs are mastered at. Well, Dumbo is probably the most problematic disc in the Disney/Marvel lineup as it still suffers from that low mastering issue and the bass is shockingly absent. There are moment throughout the film where the bass hits hard, but those moments are shockingly weak in comparison and while you do NOTICE the LFE, the power is just not there. There’s a scene in the high top circus at chapter six that really should command earth shaking bass, but instead we’re hit with a very low rumble that seems to say “eh, why should I bother?”. The dynamic range is crushed as well, as the film never really raises or lowers its volume at all. Quiet moments are quiet, and louder moments are...well… still pretty quiet. Surrounds work well in the track, but they don't really showcase any shocking sounds past Dumbo swooshing by in his act. It's a decent enough mix, but one that has been heavily neutered.

• CIRCUS SPECTACULARS: Dumbo's cast share their experience of making the film—and get to the heart of a story about family and believing in yourself.
• THE ELEPHANT IN THE ROOM: Explore how one of Disney's most lovable characters went from an animated classic to a stunning live-action retelling.
• BUILT TO AMAZE: Get a closer look at the film's production and costume design.
• DELETED SCENES: A compelling collection of scenes that almost made the final film.
- Roustabout Rufus
- Pachyderm Plans
- The Other Medici Brother
- Monkey Business
- A Star Is Born
- Where's Dumbo
- Elephant Heist
- A Seat at the Show
• EASTER EGGS ON PARADE: Discover the hidden and not-so-hidden nods to the animated Dumbo in this narrated tribute to the Disney classic.
• CLOWNING AROUND: Laugh along with the cast in a collection of big-top bloopers and goofs from the set.
• "BABY MINE": Visual video performed by Arcade Fire

Dumbo is not a terrible movie, but it isn’t up to the high standards that Disney is known for in their live action adaptations. The movie struggles under its own weight as Burton bloats the run time up as much as he possible can, and the director (who is known for the bizarre) really tones down the crazy that he could have gone with. The core elements of the original story are still there if you really look for it, but Dumbo feels more like a movie that has lost its way more than anything. The Blu-ray disc look excellent, but sadly the audio is one of the Mouse House's most egregious mixes so far in regards to being neutered. The extras are quite abundant though, and the movie itself is a fun enough watch as a rental, but I would be hesitant about going out and blind buying the film.