Dora and the Lost City of Gold - Blu-ray Review

Dora and the Lost City of Gold 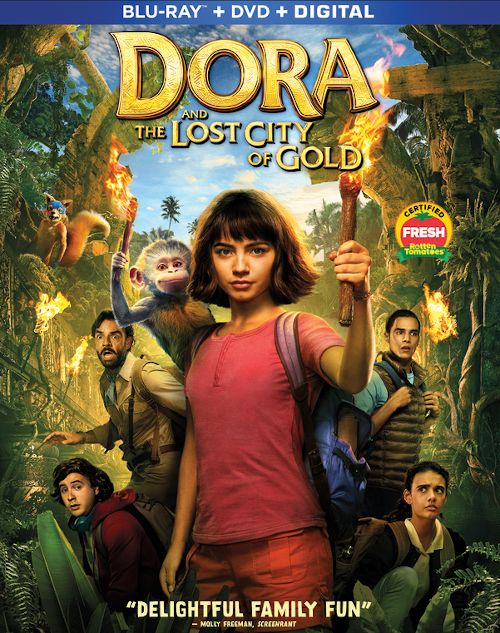 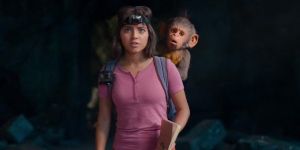 Movie
Those of you with younger kids, or have raised kids since the early 2000s have to be living under a rock if you’re not familiar with Dora The Explorer, the Nickelodeon based TV show that started airing in 2000. It’s run 19 years, 178 episodes has been aimed at little kids in hope of inspiring them into becoming scientists, explorers, and generally teaching good behavior. In a sea of absolute garbage like Bratz, Monster High and other insipid entertainment, Dora stands out as being cutesy fair that is generally appealing to parents of all moral walks of life and has been the mainstay of young children animation for the 21st century. However, the show is coming to an end and with that comes the desire to movie studios to branch out and “modernize” or “spruce up” the show and create a live action adaptation.

I will fully admit that I went into Dora and the Lost City of Gold expecting to HAAAAAATE it. I was a bit too old even in my last few years of teenager hood to be the target demographic for Dora the Explorer, but I have enough young relatives in my life that I was subjected to many a year of hearing that theme song play across my family’s TV. The trailer for this live action film looked like a cringe worthy affair, and I was fully expecting to see an epic abortion of the original show. However, the movie is really light hearted and fun, targeting a VERY so slightly older demographic (it looks like it’s aiming directly at those who are just outgrowing the TV show right now), and having a little tongue and cheek fun at the shows expense, while still reflecting the show’s core values to that pre-teen market.

Dora (Madelyn Miranda as a child, Isabela Merced as teenager) lives in the rain forest with her professor parents, Cole (Michael Pena) and Elena (Eva Longoria), where she’s homeschooled and raised with a sense of adventure. However, she has an even bigger adventure ahead of her in the form of Highschool. Sent to the states to go to a traditional school, Dora is not prepared for the incredible culture shock of living in a big city where you don’t wear your heart on your sleeve. Poor Dora becomes ostracized by the brutal teenagers, despite her best efforts to just be cheerful and friendly to everyone. Even her cousin Diego (Jeff Wahlberg….yes, related to THOSE Wahlbergs) has grown up and assimilated into teenage culture. 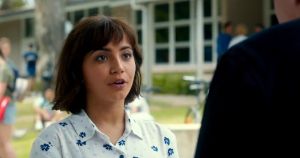 However, when her parents end up missing and Dora and her friends kidnapped by a group of treasure hunting mercenaries, it’s up to Dora to try and save them. Armed with nothing but her backpack full of gear, her pet monkey Boots (Danny Trejo), and a cheerful sense of optimism, the young teens trek across the rain forest to find a missing Mayan civilization and rescue her parents before the mercenaries find them first.

I was actually surprised by Dora and the Lost City of Gold. It stays true to the roots of the TV show, while appealing to a generation that is just growing out of it (due to it finishing). The movie is a bit kiddy for my tastes, but it seems to hit that proper amount of adventure for kids without being too ridiculous. The cast is just having an absolute blast together, which really helps with the organic feeling of the adventure flick. It may not be for adults, but it deals with the subjects of peer pressure, bullying, and being hoonest with yourself while still having fun and danger mixed in. Definitely aimed at pre-teens, but rather enjoyable for what it is

Rated PG for action and some impolite humor 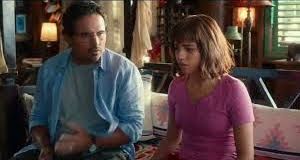 Dora and the Lost City of Gold is one of the few new Paramount titles that was finished ON 4K for the master, but sadly didn’t get a 4K UHD release. My guess was that because it never really lit the theaters on fire (made $104 million off a $46 million budget) so Paramount probably figured it wasn’t going to be a big seller on 4K. Sad, but the way the cookie crumbles unfortunately. The Blu-ray release is just SCRUMPTIOUS, though, with a fanastically bright and cheery color palate that just pops at every turn. The jungle environment is filled with deep green, earthy brows, red, pink, blue and gold highlights that just dazzle the eyes. Clarity is razor sharp (pretty typical for a digital production), and fine details pull no punches across the board. You can see every bit of dirt and grime that Dora and her friends acquire on their adventure, as well as the folds and creases of clothing, and even though some of the CGI is a bit wonky (especially for the animals), it’s a great looking encode that really is almost as perfect as can be.

Dora is decked out with a full on Atmos track to enjoy, and it’s a show stopper as well. The film is a bit front heavy for the first half an hour or so, but once Dora, Diego and the rest of her friends make it back to he rain forest then things pick up in a big way. The musical score is light and airy, while the sounds of the jungle are full and rich with ambient noises. Chirping birds, squawking monkeys and roaring waterfalls all make an appearance, as does some serious LFE too. The temple scene near the end has some incredible bass that just rattles your teeth as they unlock the puzzles. The overheads get used quite a bit with the jungle noises, but not OVERLY so. In fact, it’s a bit quiet over the top end I noticed. Not a big deal as the rest of the track is so dynamic, but just a comparison against some other notable Atmos tracks.

• Bloopers – Take a trip to the wild side with hilarious bloopers of the cast's funniest on-set mishaps.
• Deleted and Extended Scenes – Journey deeper into the jungle to find the "lost" scenes not shown in theaters.
• All About Dora – Discover how Isabela Moner transformed Dora into a jungle-savvy teenage adventurer for a new generation.
• Can You Say Pelicula? – Unlock the mystery of underwater stunts and surviving quicksand with Eugenio Derbez.
• Dora In Flower Vision – Explore the movie's playful animated sequence, a treasure trove of nods to Dora's cartoon origins.
• Dora's Jungle House – The adventure continues with this behind-the-scenes tour of Dora's jungle house, part museum, part laboratory, and always a place for family.

Dora and the Lost City of Gold is an old fashioned adventure movie for pre teens. I fully admit that this wasn’t aimed at my demographic, but the cast is having such a lot of fun, and the enthusiasm for the source material is palpable. Every one of my nieces and nephews had a blast at the theater, meaning it hit the mark for which it was aiming, and did so quite well. The fairly lavish production values (for a Dora the Explorer film) brought one of the most prolific animated kids shows to the big screen for the first time, and actually translated better into live action than I was expecting. The Blu-ray from Paramount Pictures is nothing short of stunning, with very good extras and amazing audio/video specs.

Recommendation: Decent Watch For the Kids

Thanks for the review. My kids when younger used to watch the cartoon. I will see if they are interested in seeing this once available on amazon prime/netflix.