Dona Flor and her Two Husbands 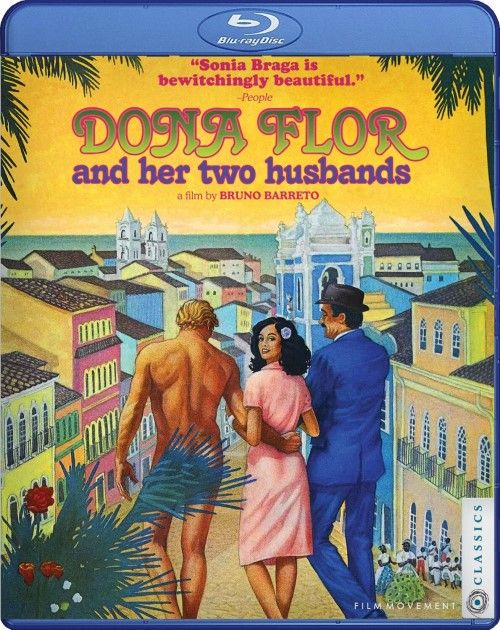 Movie
I’m actually tickled pink that Dona Flor and her Two Husbands actually got a Blu-ray release. It’s one of those flicks that has almost been lost to time in terms of home video releases. While we still have hundreds (if not thousands) of Hollywood titles that just haven’t made it from the VHS and before days, but there are even MORE countless titles from foreign countries that barely have a whisper of hope of being rescued, and I honestly thought that this was going to be one of them. Dona Flor and her Two Husbands may not be known in the United States outside of cinemaphiles, but it was one of Brazil’s largest grossing films of the 1970s, and also spawned a host of broadway style plays of the same story and name. However, it’s been YEARS since I’ve seen the movie (on VHS the last time I remember) and I actually gave up trying to find this hidden diamond in the rough on DVD outside of the countless bootlegs that were out there of dubious quality. Then in comes Film Movement studios with a brand new remaster (according to the press release) and a fantastic 16 page booklet and even a new commentary to round it out.

The 1976 Brazilian comedy follows the self titled Dona Flor and her trials and tribulations choosing between passion and her head. The film starts out with her husband Vadinho (Jose Wilker) keeling over dead in the streets from too much partying. Flack back in time and we see that Dona Flor’s (Sonia Braga) life wasn’t exactly easy with Vadinho. He was a drunken ner do well that pretty much gambled away all of her money, hit on other women, and drank away what little health he had left. However, Vadinho had other…..shall we say….”talents” that endeared Dona Flor to him. Talents that were sadly missed after he passed away.

Fast forward a little bit later and Dona Flor is courted and won over by the most level headed Dr. Teodoro (Mauro Mendonca) who is the exact opposite of Vadinho. He’s calm, level headed, a respected member of the community, and is wealthy enough that he doesn’t have to leach off of her. Falling in love with the good doctor, Dona Flor believes her life is nearing peak happiness. Except for….well...areas that Teodoro lacks that Vadinho was so good at. Then *poof. Magically her dead husband’s ghost appears, offering her the temptation of being with him once more. Now Dona Flor has to choose between her passions or her heart in this sly and near slapstick comedy of decisions.

If you look at the film closely you’ll notice that it has a striking resemblance to Noel Coward’s Blithe Spirit. We’ve got the dead spouse coming back to tease the moved on spouse with what was a tumultuous romantic affair of the day. However, it’s more madcap and definitely a funhouse mirror reflection of Coward’s witty play. While I love the film for it’s madcap Peter Sellars style comedy, I also have to admit that the movie does have some pacing issues. It spends a bit too much time in the first half of the movie chronicling Vadinho’s ways before his death. The second half just moves a bit too fast, giving us 30 minutes for Teodoro and his courtship of his new wife, and only 27 minutes (including credits) for Vadinho to pop out of the grave and weave his web of comedic temptations. Personally I felt cutting out about 20 minutes of the first hour and adding about 20 minutes to the ghost story line would have balanced out the narrative a bit more.

All complaints aside, Dona Flor and her Two Husbands is a hard to find diamond in the rough comedy that was a massive hit in Brazil, but basically unknown over the rest of the world. It’s a bit rough around the edges with how it treats Dona Flor having her cake and eating it too, especially how it really solidifies Vadinho being a manipulative, gaslighting, scumbag of a husband, and yet She’s inexorably drawn to him. Modern sensibilities may notice the discrepancies, but for the time it actually worked. The film is never perfect, but delightfully charming and with a Peter Sellars in The Pink Panther sense of lilting comedy just hovering under the surface. It’s never truly guffaw inducing humor, but a more subtle and rather wicked biting variant that

Rated R for nudity and language by the MPAA

While the press release states that this is form a new remaster, there are no real technical details on what the master was struck at, how much restoration was done, or any other tech details whatsoever. All in all, it’s not a bad transfer at all. There are some vertical lines that pop up here and there, some mild print damage as well, but the end result is still a very natural and organically filmic experience. There’s weathering in the colors and the darkness levels, and some scenes spike in grain and show blasted out whites (such as in the casino). Still, fine details are incredible for a low budget Brazilian 70s film, and the difference between my old VHS copy and this Blu-ray are simply amazing. Not in the best of shape, but still the best the film will probably ever look.

The film comes with a 5.1 DTS-HD MA track in the original Portuguese, as well as the original 2.0 stereo track in LPCM as well. It’s a hard decision to make as each track has it’s own pros and cons. I really like how the 5.1 mix opens up the sound stage, allowing for a rather impressive use of the ambient noises to bleed in (though a few times I felt I detected some dialog bleed in the rears). It’s louder than the 2.0 track and definitely more encompassing. However, the 2.0 LPCM mix is more front heavy and has a more balanced sound to it. Really, both tracks are good, but it will be a personal decision which one you choose.

As I said in the first paragraph of this review, I’m tickled pink that we finally have a domestic release for Dona Flor and her Two Husbands on Blu-ray. I never actually expected we’d see this film EVER in modern home video simply because it’s a film that seemed destined to be lost in time forever. The Blu-ray looks and sounds solid and even has a couple of new extras on board too. Highly recommended to fans of subtle foreign comedies, and while it’s definitely on the R-rated side of things, is still well within modern standards for being an “erotic” comedy.

Recommendation: Fun Outside the Box Film

I never heard of this one but will check it out. Thanks for the review.

Asere said:
I never heard of this one but will check it out. Thanks for the review.
Click to expand...

haha, I'm going to say that very few people outside of film festivals really have. It's a fascinating comedy, but not one that hit U.S. audience eyes very often.

Is that aspect ratio a misprint? Doesn't match IMDB or the screen shots you posted.

thrillcat said:
Is that aspect ratio a misprint? Doesn't match IMDB or the screen shots you posted.
Click to expand...