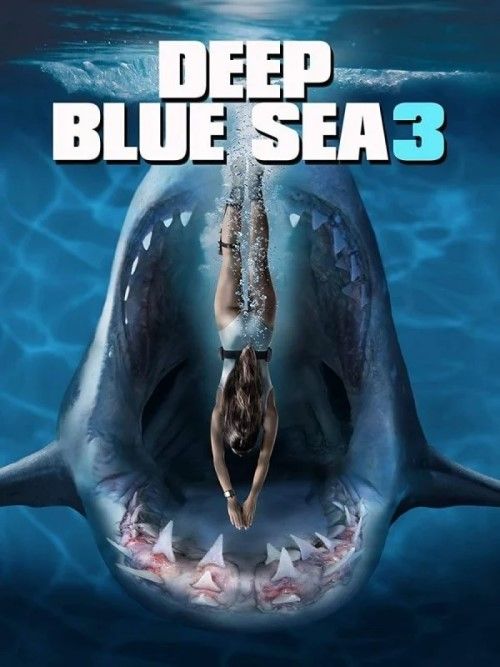 Movie
Seriously? A THIRD Deep Blue Sea film? 2018’s Deep Blue Sea 2 was kind of a fluke I thought. A film that had been stuck in production hell for years due to the demise of Warner Premiere (a now defunct sub studio of Warner Brothers central) and BARELY made it’s way out to home video 2 years ago without even the simplest of press announcements. It sort of soft rebooted the franchise, and had us following a billionaire and a team of scientists genetically modifying bull shark’s brains so that they could produce a cure for Alzheimer from it. Of course things went seriously wrong, the sharks got away, and the humans all went down except for a lone survivor. Simple, right? Also, it must have made money on home video though, as suddenly 2 years later we get an insta sequel.

And yes, this is a sequel in all true sense of the world. The film picks up 3-4 years later where we see Dr. Emma Collins (Tania Raymonde) and her crew huddling on the abandoned fishing village of Little Happy, that just so happens to be on top of a giant great white shark nursery, where said sharks come to give birth to their young. The dangers of climate change (eek! Not climate change again!) has been devastating their birth rates, and the shark population has slowly been dwindling. However, even more trouble shows up when Dr. Collins’ ex-boyfriend Richard (Nathaniel Buzolic) docks in their port with some bad news. A group of 3 bull sharks are heading this way to the nursery, and they’re man eaters.

Yeah, you guessed it. If you saw Deep Blue Sea 2 you know that these are the offspring from the genetically modified bull shark “Bella” (the super smart shark they were experimenting on) and they’re not just man eaters. They’re evolving and hunting without mercy, killing great whites and humans alike without prejudice. Richard and his commando like crew claim to be here to capture them and study, but it’s painfully obvious that while the crew is here to hunt the predator sharks, they’re more than willing to sacrifice Dr. Collins and everyone else on the little island to complete their mission.

Deep Blue Sea 2 was utterly painful. It was derivative, lost the campy “fun” of the first movie, and was pretty much your average DTV movie. Don’t get me wrong. I love shark movies, especially campy ones like The Meg, Deep Blue Sea, 47 Meters Down and The Shallows, but Deep Blue Sea 2 was a movie that just didn’t need to be made. That being said, I actually think that the 3rd film is not half bad. Yes, it is most definitely a crummy DTV movie, with all the tropes and bad acting thrown in. But the director and powers that be realized that the 2nd movie took itself WAY too seriously, and decided to add some intentional camp back in. The deaths in the movie are hilariously over the top, winking and nodding directly at the camera, laughing along WITH the viewers at some of the insanity (seriously, there’s a couple deaths that had me doubling over laughing, such as the “holding the human up to get eaten by a flying shark” one, or the double explosion sacrifice of Shaw).

Is it a good movie because of those deaths? Naw, of course not. This is a movie that also didn’t need to be made, but the improvements made upon the 2nd film is noticeable. The acting is a bit better, the budget is just as slim, but seems to be handled better with the effects, and the deaths are a lot of fun. I will not say that I recommend the film, but if you’re watching this after watching Deep Blue Sea 2, then you’ll notice the obvious improvements, as I actually had a fun enough time this watch instead of wanting to hang myself with my HDMI cable like I did with #2.

Rated R for some violence, bloody images, and language

Being that Warner provided me with a digital screening copy to review, I will refrain on giving a technical audio and video score due to the fact that it was a press only screener, and not indicative of the official streaming quality or the physical disc

Same as the video, I will abstain from giving an analysis of the audio due to the streaming nature of the source

Deep Blue Sea 3 was not as bad as I was expecting after the horrible 2nd film. It’s not good, but it’s certainly entertaining enough for a low end rental if you want to see sharks munching on some humans. The film winks and nods at the viewer with campy death scenes, and seems to not take itself too seriously, which was one of the biggest obstacles of the previous film. Being that we’re still a month out from the Blu-ray release, Warner Brothers was kind enough to offer us this digital stream as a taste test for the film timed with it's digital release on all major platforms, with a Blu-ray review to following in the next few weeks. That being said, judging just by the film itself and having no hands on experience with how the Blu-ray will look/sound, this is a cheesy low end rental that just may surprise you a little.