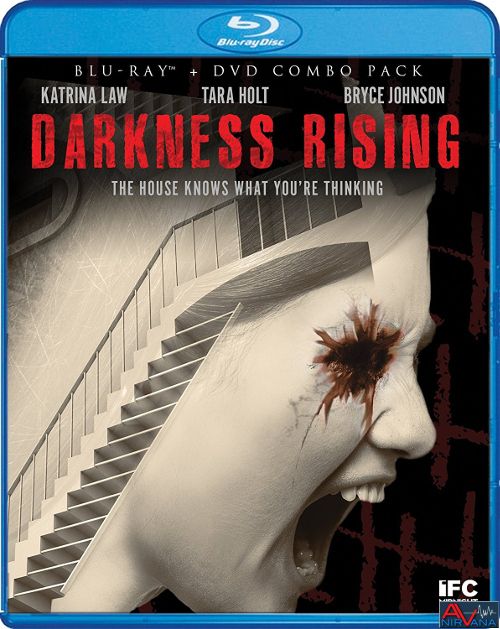 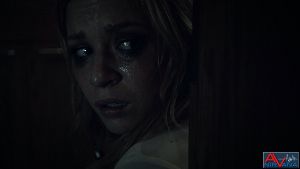 Movie
As I said in my review of Killing Ground, IFC Midnight is one of those production companies where you have a really good time with the film, or you just end up rolling your eyes in frustration. Darkness Rising happens to be an example of the latter reaction, as it suffers from a broad array of faults that stem from an inability to really know what it wants, or a way to execute the semblance of a plan to get there. The film just ends up being as bland of a film as the title suggests (Darkness seems to be the new “catchphrase in horror movies, much like “evil” was in the 80s, or “chasing” was back in the 90s). The story sine bounces around, hinting at something greater, and then just falling into nothingness as the script writers realized that they needed to come up with some form of ending, and just decided to over explain the big “mystery” in a scene which is nothing short of expository vomit.

After nearly getting murdered by her mother 25 years, Madison (Tara Holt), her cousin Izzy (Katrina Law, most notable as Talia in Arrow) and Madison’s boyfriend Jake (Bryce Johnson) return to her childhood home in an effort to find some sort of reconciliation with the past. Just as the trio is about to leave and head back home after looking around, the house decides that it wants to keep them a bit longer. Doors close, a hell hound bars the doorways, and the evil that drove her parents mad so many years ago decides to come out and torment the late 20 something victims. No matter how hard they try, Madison, Izzy and Jake can’t escape, and as the demonic house claims victims one by one, it draws Madison deeper and deeper into her own past, revealing just why exactly she is here today, and why she suffered so many years ago.

I have to give Darkness Rising some credit for being inventive with the gimmick. The idea of a haunted houses is pretty common, but WHY the house is haunted and what it WANTS is completely unique to this film. I won’t spoil the exact reason why it has drawn the three of them here today, but lets just say that it has a pretty neat little twist in the final twenty minutes that actually had em tipping my hat to. HOWEVER, there is just so much wrong with the rest of the film that I can’t really give the film even a guilty thumbs up. There is just so much going on here, with haunted houses, demonic spirits, ancient rituals from the past, a series of words all leading to the number 5, an evil key (Ash would be proud of this twist), and a script that honestly feels like it deserved teenage leads. I know that late 20 year olds playing teenagers is nothing new, but the problem is that the dialog is DEFINITELY something teenagers would say and do, but the script lets us know that these people are almost 30 years old. A fact that makes their idiotic behavior and dialog even more painful to the senses.

Darkness Rising’s biggest flaw is probable that it has TOO MUCH going on at once. The movie just movies along at a brisk pace, tossing elements of classic supernatural horror in, then mixing in a big of a slasher vibe, and finally, as the movie is just about to wrap up the head demon comes out to go off on a verbal diatribe that just dumps exposition on us like yesterday’s trash. Kind of like “wait, we didn’t have enough material to make this past an hour and twenty minutes, but we’re also not done yet, so let me narrate to you the reason so we can just end this thing and go get donuts”.

I really had semi decent hopes when I saw the horror god himself, Ted Raimi (Sam’s younger brother) was in the opening portion of the movie, but sadly he vanishes after only a few brief moments at the beginning and end, leaving you wondering just why he was even there to begin with (in an ending that makes almost no sense). The acting is your average B level horror acting, and the three man cast and limited set pieces made it easy to focus on acting rather than special effects, but even that isn’t enough to make this movie worth a watch. 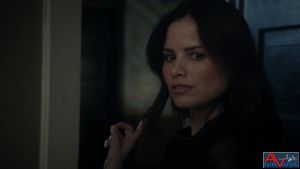 Scream Factory has done a commendable job with the film’s encode, but the movie itself doesn’t lend itself towards shiny visuals. The film opens up with a greenish tinted scene that seems to be set in the past, but then jumps forward to the present where we meet our trio of heroes/victims. There we just dwell in utter darkness as the three stumble around the dark house, which is bathed in deep blacks and a teal blue tinge that robs the film of any real color (except for a few splashes of blood on the floor and sheets). Fine detail is a bit muddy due to the murkiness caused by the washed out blacks and heavy grading (not to mention the very obvious low budget used to shoot the film. It’s all in one house, with three people. Not a whole lot of money went to anything it seems), and the shadow detail is problematic at best. When the lights come on in the house there is much better facial details, and the dolls and other household items are intimately detailed. So a bit of a mixed bag here. 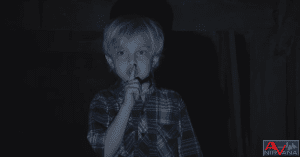 The audio fares a little bit better, as it seems to be fairly encompassing for the low budget. Once again Scream Factory provides us with the standard 5.1 DTS-HD MA track, as well as a down mixed 2.0 DTS-HD MA track for night listening. The 5.1 experience is actually rather pleasant, with audible surround usage that is used to good effect with the creepy demonic movement through the house, and the intense score. Dialog is well placed up front, but I did notice that it had a tendency of getting a bit lost in the excitement sometimes. LFE is tight and powerful, with a good amount of presence (as with any good horror movie), but it was a bit one notish. An overall good track, it’s main limitations come from the low budget which once again rears its head.

Darkness Rising starts out very slowly, jumps to a frenetic speed for the next 35 minutes, and then actually has about 15 minutes worth of interesting horror twists that made me wonder if the film would actually end decently. Sadly these hopes were dashed in the final 2-3 minutes and I once again have the frustrating job of NOT recommending a horror movie, even though I have a rabid love affair with the genre. The film is dreary and bland, and the visuals of the movie are just about as bland as the script. Video is OK, and audio is solid, but the extras are just about nonexistent, so I have to say “Just Skip It”.

Thanks for the review. Per your recommendation, I will skip it.

That cover art is crazy!!!

the cover is better than the movie lol

Michael Scott said:
the cover is better than the movie lol
Click to expand...