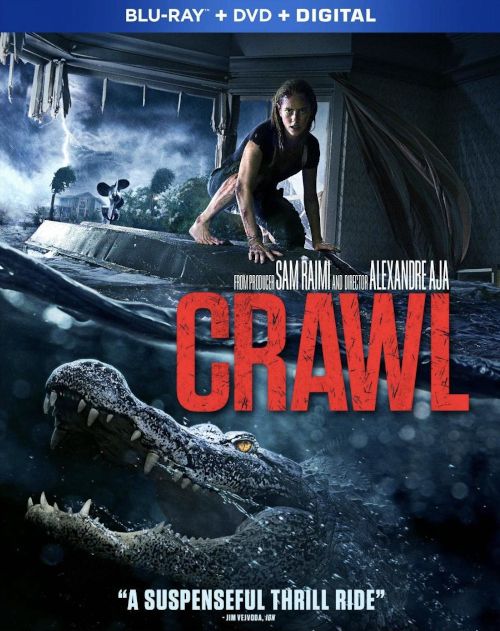 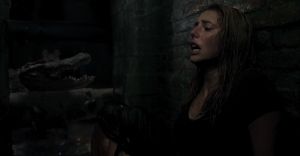 Movie
Creature features are a bit love of mine going all the way back to the the classics, like Creature from the Black Lagoon. There’s just something intensely exciting about a big nasty monster coming out of nowhere and terrorizing us poor humans. I especially like overgrown beasts that exist in reality, so I was kind of hoping that Crawl would turn out to be a fun film. Sadly the world of monster movies has essentially devolved into SyFy channel movies like Sharknado, or the silliness and over the top gore of the Piranha movies. I mean, they have their place in entertainment, but I love a good tense thriller, and was greatly surprised to find that Crawl hit all of the right spots. An intense monster, good acting, and a lean run time that doesn’t bog itself down with extraneous characters and poorly placed humor.

Collegiate swimmer Haley Keller (Kaya Scodelario) gets a call from her sister Beth (Morfydd Clark) regarding their estranged father Dave (Barry Pepper), who is living alone out in South Florida. There’s a category 5 hurricane coming his way, and Dave isn’t picking up his phone. Frustrated at her father, Haley decides to go down to their childhood home and check on him, only to find him seemingly missing. Investigating further Haley finds her father under the house in the basement, badly wounded and unconscious. Attempting to pull her father back up into the house where she can get him to a hospital, the two are confronted with the REASON that her father is lying wounded in the basement. A gigantic gator who drives the two back behind a set of pipes where they are temporarily safe.

With the water levels rising from the storm, and the gator on the outside of the pipes, Dave and Haley have to figure out a way to get out of there, stat. The only thing is, there’s not one, but SEVERAL gators who have crawled into the basement and they’re not about to let Haley get out of there easily. With time running out, the water climbing higher, and more gators milling around outside, Haley’s window to save herself and her father is slowly closing.

Crawl can be described in just a few words. Intense, thrilling, non stop tension, and a lean run time that keeps the bloat at bay. Haley is set up with some mild character development at the beginning of the movie, but within 10 minutes we’re completely immersed in the terrifying story. Director Aja and the Rasmussen brothers doe a fantastic job at keeping the tension high without feeling like it’s just another dumb story without a plot. The rare bits of downtime allow Haley and Dave to develop their characters a little, but fear not, this is not some talk heavy drama. The action is literally nonstop, and once the firt gator drops down into the basement to confront Haley, that sense of dread and heart pounding excitement doesn’t let go of you.

While there’s a few other characters in the film (usually to get munched on), this is a two character movie. Dave and Haley take up 99% of the human interaction, and it works to the advantage of the film. The two of them (and the gators) are right in your view the entire time, leaving very little downtime to get to know other people, thus you’re constantly worried and invested in their survival (well, along with their dog, cuz no one wants the pup to get eaten). The underground basement scenario that the two are put in is absolutely perfect too. It’s a maze of pipes and dirty caverns and hideaways that make it perfect for the two humans to try and stay reasonably safe from the giant gators who are too big to fit in some places. Luckily the entire film doesn’t stay there, allowing for them to mix things up a bit, and the constant filling up of water changes the advantages for both the creatures and the humans several times throughout the movie.

Crawl comes to Blu-ray with a very fine 1080p transfer that is fantastic to watch, even if it IS mostly inside of a dimly lit basement and underwater. Colors are heavily skewed towards that teal blue look, with splashes of deep reds, and some sharp primary colors that jump out at you due to how otherwise heavily teal the image is (Haley’s orange sweater, the red truck she drives). Details are really really well done, with the rough look of Barry Pepper’s face showing up nicely, as is the mud and ruddy bricks in the basement. The dark is where this film lives, but there isn’t any major crush and I was shocked to see that banding was just about nonexistent (usually in underwater shots you see a glimpse, otherwise it’s really lacking any banding). Blacks are silky black and inky, and except for a teensy bit of crush and those underwater banding shots, I would have to give this picture a perfect score.

This is an absolutely INSANE sounding audio mix. For such an atmospheric movie I was really hoping that Paramount would release an Atmos track for the home video release, but I guess without a 4K UHD disc they didn’t feel the need. Still, this is nothing to sneeze at as the 7.1 mix is a ridiculously aggressive mix that can cause the listener to literally leap out of their seats. The storm is literally all around you the entire time, and that means the surrounds and mains are HEAVILY utilized throughout the film. Still, they’re not so over the top as to be overbearing, but believe you me, those surrounds pretty much never stop with the cacophony of rain, cracking boards, and rumbling of alligators from beginning to end. The bass is jaw dropping, as the storm allows for some pretty crazy moments, but it’s the alligators that really bring home the pain. That first encounter where Haley comes face to face with one lets the listener in to what they’re in for the rest of the film. Luckily the bass is really really tight and clean, shaking the house down to the foundations, but never seeming bloated and one note (ish).

One point of contention that I must make is the dialog. It’s mixed about 4 DB’s lower than normal. Meaning you either have to boost the center in your receiver, or just raise the volume 4 DB’s on the receiver. This puts the rest of the track a bit on the hot side, but with the insanity of the storm that sort of drowning out of the vocals seems to fit in with the motif. Still, dialog is still very intelligible, and the dynamic range is beyond ridiculous, but I would have preferred the dialog to be a bit more balanced than it was with the rest of the track.

Crawl was a complete and total surprise to me. I expected a mediocre creature feature, but ended up with an intensely thrilling flick that kept my heart pounding the entire time. It’s not designed to be a highly adept drama with multiple facets, but rather a monster movie that keeps you on the edge of your seat the entire time, and in that regards it completely accomplishes its mission. The Blu-ray features fantastic video and amazing audio, but the extras are a tad slimmer than normal. All in all, this is a fun monster movie with just enough gore, just enough tension, and a wildly kinetic pace that doesn’t over stay its welcome. Highly recommended as a fun watch.

Thanks for the review. I will also check this one out.

Yes, the review I was looking for
I just preordered it
Thanks for the review.

I've heard numerous people talking about this one!!!! After reading Michael's review I'm definitely interested. Curious to hear what the others think after watching. Please follow up with your feedback.
Last edited: Oct 20, 2019

jdubs75 said:
I've heard numerous people talking about this one!!!! After reading Michael's review I'm definitely interested. Curious to hear what the others think after watching. Please follow up with your feedback.
Click to expand...

I thought it was really good. Not over the top , a solid story and great acting. It made me jump and that's hard to to with me. I'm glad I bought it.

Asere said:
I thought it was really good. Not over the top , a solid story and great acting. It made me jump and that's hard to to with me. I'm glad I bought it.
Click to expand...

Michael Scott said:
lol that scene where you first meet the gator near the beginning of the movie nearly lifted me out of my seat even though I knew it was coming
Click to expand...