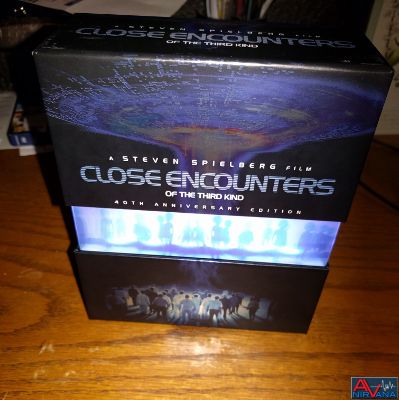 Movie
Steven Spielberg is a legend in cinema, but when it comes to science fiction, he’s really known for TWO legendary films. E.T. and Close Encounters of the Third Kind. I reviewed E.T. the other week, and it still is one of my favorite films of all times (Sorry Todd), but 5 years before that Spielberg famously produced one of the most beloved alien movies of all times in the form of Close Encounters of the Third Kind. Each film is wildly different from each other, but beloved by many for very different reasons. E.T. was the kids adventure movie about a lovable space alien, while Close Encounters was the much more adult film that focused in on the wonder and amazement of meeting an ACTUAL extra terrestrial. If I had to make a rough comparison, I would have to say that Close Encounters mirrors many of the same pacing methods and introspective qualities as 2001: A Space Odyssey did.

With this set, Sony went back to the negatives and created a 4K master for this 40th anniversary set, and even gave it a small theatrical run. In all reality this is the same as the really incredible 30th anniversary set 10 years ago, just with a boost to 4K for the regular version, and some really neat packaging for the pimped out uber awesome edition. We get all three versions of the films (Theatrical, Special Edition and Director’s cut), and the little booklet of information and pictures that was available in the 30th anniversary release.

It’s amusing to see two giant films in the sci-fi genre released in the same year. Spielberg’s passionate tale of benevolent space men coming to visit an awe struck populace was up against indie film maker George Lucas and his space schlock, Star Wars. Spielberg’s movie is probably the more intelligent and well done film of the two, but we really don’t have to say anything about Star Wars and the incredible franchise success that it became. Honestly, while I love both, I have a hard time choosing between them as more enjoyable. I also have to say that I think Close Encounters is just SLIGHTLY over rated, and not one of THE greatest sci-fi films ever made. Is it good? Yes. Is it great? Mostly likely. But I just have a hard time ENJOYING it as much as the 5/5 start ratings it has accumulated over the years have guilted me into trying to feel. 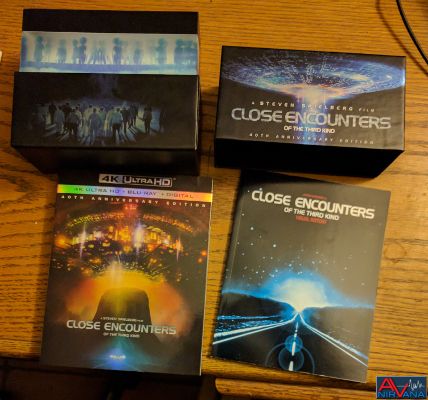 Spielberg was just coming off of the wild success that as Jaws and instead of treading familiar waters he chose to instead take on a deeply personal tale of different people coming together after a close encounter with what seems like a UFO. Electrical lineman Roy Neary (Richard Dreyfuss) and several varying people across the nation are witness to a string of brightly lit UFOs that dance across the night sky and change their lives forever. Roy tries to go about his daily life, but is plagued by visions of a mysterious mountain top that he can’t get out of his head, while Jillian Guiler (Melinda Dillon) desperately wants her abducted child, Barry (Cary Guffey) back. Also plagued by those same visions, she and Roy come together after having the same experience and are inexorably drawn to find this mountain. All the while the military and other government officials romp around the area with impunity.

Close Encounters is considered one of the most important films of the 1970s, and for good reason. Back when it was made most of the science fiction that came out of the era was schlocky pulp fiction with alien vampires, monster movies and the like. Very few were actually focused and serious in nature. While Star Wars was pulp at the core, it gained a life of it’s own and shot off into stardom, while Close Encounters very delicately probed at the culture of the time and the idea of ACTUALLY meeting an extra terrestrial. Back in the 1970s we were all obsessed with science fiction, whether that be in writing or in film, as the moon landing had taken place so recently and we were all looking to the stars in wonderment and excitement. Spielberg masterfully taps into that wonderment and excitement as he maps out how an encounter might play out with a benevolent species. There’s all of the classic abduction roles, but everything is THROUGH the eyes of us as a confused species. Giant lights in the sky, flashing flaying saucers, and the feeling of tense excitement at what would become one of the most legendary first contact films is incredibly palpable.

On the same note, Spielberg’s magnum opus is still a bit cheesy in modern times. The fun adventure world of E.T. allows it to age much better than the naive viewing of extra terrestrial contact that his first Sci-fi movie explored. Things can play out a little TOO slow at times, and the film’s special edition was really botched when Sony wanted Spielberg to show the interior of the mothership, decreasing the tension and wonderment with cheap special effects. It’s still a great movie, but for someone how hasn’t seen the film since the 30th Anniversary edition came out, I find it hasn’t aged as well as it could have. 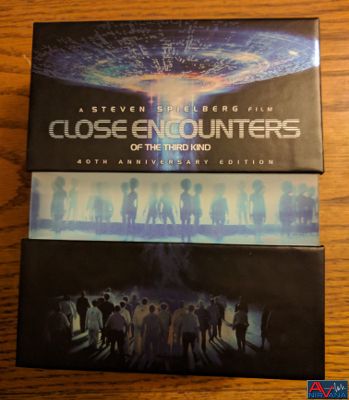 With this new release of the iconic film, we also get a new 4K master as well. This master has been given to not only the 4K UHD disc, but the 40th anniversary edition Blu-ray as well. I’ve always liked the look of Close Encounters as it really screams FILM to me. The movie was shot using a mixture of 35mm and 65mm film stock, and looks pretty good for this 4K UHD upgrade. I will say this though. Close Encounters won’t look as stunning as E.T. or Blade Runner and that’s something I’m completely comfortable with considering the filming style. The 2.39:1 HEVC encoded image shows some black crush here and contrast issues, but it also has a really well done application of HDR to the mix. The colors and textures really pop off the screen, especially with the scene where Barry gets abducted. His opening of the door shows off an extremely warm array of brilliant lights that are incredibly vibrant. The image can be VERY heavy on the grain, something that the film has always shown, so while it may not look bright and glossy, it looks very reminiscent of 70s film stock. Fine details are good, but some of the special edition shots tend to look a bit soft and smooth due to age and condition of the elements. Skint tones are solid, but take on a slightly ruddy/orange look that so many other 70s films had. 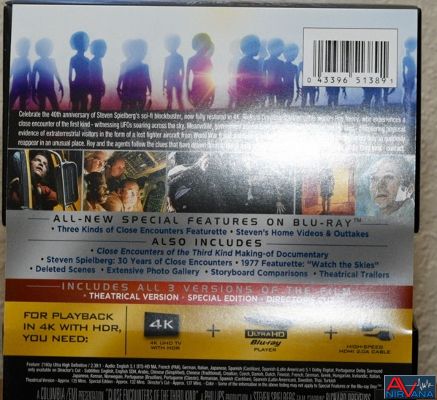 One thing that had my scratch my head was the decision to use 5.1 DTS-HD MA lossless for the film (the same one that was on the 30th anniversary, although they dropped the 5.1. Dolby TrueHD that the 30th came with) instead of giving us an Atmos mix. I can’t say WHY Sony did this, but then again I’m not sure how much of an upgrade an Atmos mix would really be over a 5.1 mix. Close Encounters is much more of a drama than an action extravaganza, and the first half of the film really shows that with a very front heavy mix that really relies on dialog. The second half is partially front heavy, but also starts opening up the sound field with Roy and Jillian making their way to the mysterious mountain and the military bringing in all of their gear. The end with the musical tone spaceships, as well as Barry’s abduction, are the complete opposite. Roaring bass and wide use of the surround channels bring out the best of the audio mix and leave the ground shaking with lfe and surround details. It’s a rock solid track, but one that is definitely more drama oriented than one would think in a sci-fi film. 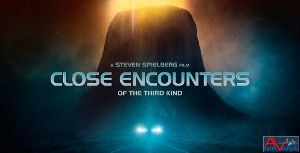 This review is a bit unique as instead of adding in screenshots of the film, I’m focusing in on the packaging. This is due to the fact that the 40th anniversary special edition (there are two, this version and a bare bones 3 disc set) and my focus was on highlighting those cool packaging details that make the special edition version a good buy. For those who are wanting to upgrade from the 30th anniversary, the decision will come from the new 4K transfer, and in that I have to give it a solid thumbs up. The new release looks different with HDR, and while it’s not LEAPS and BOUNDS better than the 30th anniversary Blu-ray, It’s a worthy upgrade in my humble opinion. The cool swag that comes with this set appeases the special edition nerd in me, and the two extra features that come with are pretty neat (though not wildly new). Still a great watch for Sci-fi fans everywhere.

Thanks for the review Mike. While I didn’t purchase the bundled box set I did pick up the 4K version. I thought it was a noticeable and nice upgrade over the 30th anniversary Blu-ray. I do think an Atmos mix would have been nice, like you I’m not sure the improvement would have been substantial. Still would have been nice though.

Todd Anderson said:
Great review Mike. This one has me interested... the $50 price tag, though. Hmmm....
Click to expand...

If you’re just wanting the movie it can be had for considerably less.

Yes sir. Picked up my copy at Best Buy.

Thanks for the review. I vaguely remember this movie. Will have to check it out.

*edit* Ordered it. And pre-ordered Apollo 13.

*edit* Ordered it. And pre-ordered Apollo 13.

Apollo 13 is being released in 4K? OH SNAP! Todd, I’m blaming you now.