A smaller set of changes in V5.20 beta 8, mostly cleaning up a few issues from beta 7.

Graph capture no longer shows the smoothing selection on captured graph images, any smoothing which has been selected can be seen in the graph legend if it is included. The positioning of data panels on captured graph images has been improved and panel opacity has been reduced to match the way it appears in REW. There is now an option to include date and time on graph captures, if selected it appears in the bottom right corner of the graph.

Icon resolution has been improved on macOS retina displays and a set of icons for the dark colour scheme has been added.

Windows installers (32-bit and 64-bit) now provide an option to allow multiple instances during installation, so there is no longer a need to have a separate installer for that.

Windows installers prompt to download a Java runtime during installation if one is not available rather than including it in the installer, reducing the installer size.

Thanks for the update John.
B

In line with the removing of the smoothing selection in the captured graphs. It would be nice to also have an option to disable the EQ filter numbers on graph capturing. I really appreciate your efforts on this application.

I haven't tried the last couple of betas so not sure if this is an old issue but I find the scope window opens and then is immediately sent behind the main window (on windows 10).

3ll3d00d said:
I haven't tried the last couple of betas so not sure if this is an old issue but I find the scope window opens and then is immediately sent behind the main window (on windows 10).
Click to expand...

Not something I've seen. Is the behaviour different if you use the keyboard shortcut (ctrl+shift+c)?

John Mulcahy said:
Not something I've seen. Is the behaviour different if you use the keyboard shortcut (ctrl+shift+c)?
Click to expand...

For the last few updates my acoustic timing reference pops up saying that it is too quiet. I've cranked it and put the mic right up to the tweeter and it still says it's too quiet. If I try on older builds like 5.19 there is no problem. I'm using a UMM-6 mic. Please advise if I should try something on my end to resolve it or whether it is a new beta bug. Thanks guys!

What is the mic input volume set to?
And what is the Ref headroom figure when you make a measurement (23.4 dB for the example below)?

It's a Dayton Audio UMM-6 USB mic so I don't have a gain setting. When I have both left and right speakers running I set the output volume so at the mic position the SPL is 86 dBC. I have two of them and they both do the same thing. I've attached the warning message and the headroom screenshot as per your request.

Thanks for writing back John! Your'e awesome!

You don't have a volume control for the mic?

In Audio MIDI Setup on OSX I can go in and crank up the level to a max of 20dB. How does this correspond with the sensitivity in the microphone calibration file?

Thanks for taking the time to help John!

Hadn't realised you were on macOS Greg, sorry. You should find the message goes away with the gain set to 20 dB. The good news is that doesn't affect the sensitivity factor as REW compensates for the volume setting. The bad news is the macOS compensation is wrong and I haven't had any luck getting the info I need to correct it, per this thread, so you could come to the rescue! From the post on that thread I know 0.25 is 5 dB, and from your post 1.0 is 20 dB, if I can get a few more combinations of volume figure and gain I can correct the compensation for the next beta release. I need the gain in dB when volume is zero and ideally for a few other settings. All this will affect is the SPL figure when you make a measurement, it doesn't affect the shape of the measurement, so the results are good regardless.
B

I see that the filter numbering are not exporting correctly via the screen capture on the EQ section of the program. The first picture is as it appears within REW and the second one is is display from within MS Word with the filter number 3 and 4 inside the picture.

That is a consequence of the size of the image and the font size, the same happens in REW itself at smaller window sizes. If the filter numbers would overlap they are moved down so that they can still be read.

Breeman said:
It would be nice to also have an option to disable the EQ filter numbers on graph capturing.
Click to expand...

The next beta has an option in the EQ graph controls to show or hide the filter numbers.
J

Hi, John!
Recently, when I share RTA graphs, some people tell me that the graph is somewhat hard to read and lack contrast if I use dark background. Then I try to improve it but it seems that I can't change the color of the peak hold trace or turn it off. I still love dark background because it's not sharp and bright when I do measurements at night.
I'd love to see an option to turn it on and off or an option to change the color of it. Thanks!

The peak trace is only shown if it is selected in the graph legend.
J

John Mulcahy said:
The peak trace is only shown if it is selected in the graph legend.
Click to expand...

I wasted half an hour tried to figure our how to turn it off the other day. I just realized it's at the bottom. I didn't even know there was legend in rta mode. I hate my life.

Possibly over-reacting ever so slightly
D

I notice that now exported impulse files are now massive, like going from 1.1M to 64M? Is that by design?

Daverz said:
I notice that now exported impulse files are now massive, like going from 1.1M to 64M? Is that by design?
Click to expand...

The file size depends on what you have exported, it hasn't changed. If you make a very long sweep measurement with the Analysis IR truncation option set to "Keep full IR" then the impulse response will be long and the file will be large. Typical measurements with the default settings (256k sweep, Truncate IR after 1.7s) have exported IR WAV files of less than 1M and text files of less than 2M. There is also an option in the export dialog to export the windowed IR rather than the full IR.
D

So it depends on what I have set at measurement time? The huge impulse response is making the Impulse tab very slow.

I am struggling with getting accurate measurements for the signal time of flight using the loopback as a reference on the new beta; well, it's the first time I am measuring using this feature in any case. The measured values I get are way off from what I can measure with a measuring tape. For an example, the coaxial speaker which is 1.23m away from the microphone gets measured as being 1.86m. Another 2-way whose tweeter is 73cm away from the microphone is measured at 1.22m by REW. I am obviously not doing something right.

I am using the Steinberg UR22mkII audio interface with a loopback cable connected on the right channel. The measured values stay the same regardless whether I use the TRS or XLR connector on the input side of the loopback cable. I didn't take the screenshot of the signal levels, however the Ref and In signal were in close proximity of each other on the scale and relatively close to the Out signal. Below are the screenshots of the impulse responses from the first and second measurements respectively. 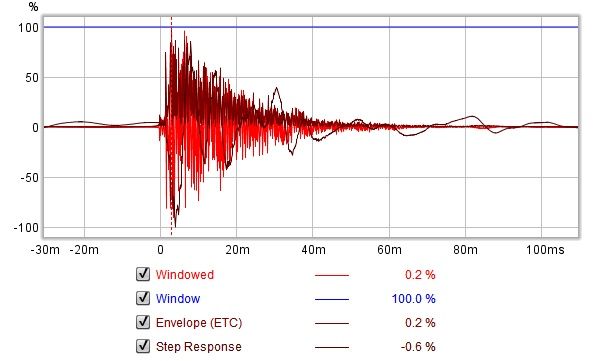 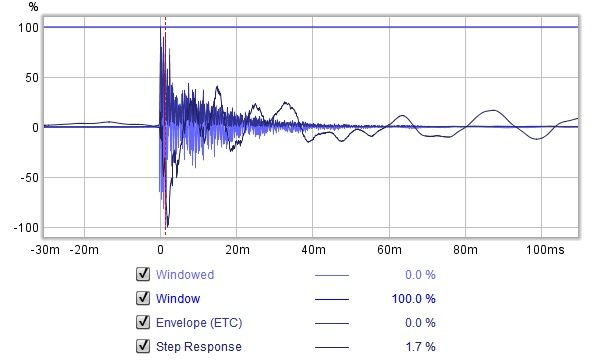 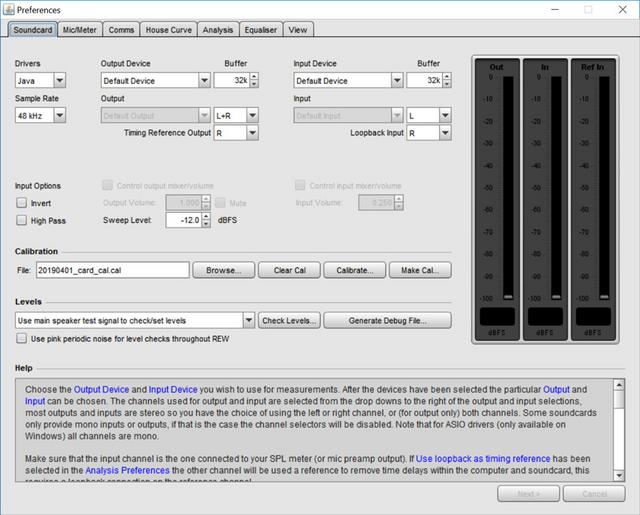 I will appreciate your help.

I just ran a quick check with a UR22 mkII and my desktop speakers and got figures within about 20 mm of the physical distance (which was 680 mm), but my IR looks a lot cleaner:

It looks like the peaks of your measured IR occur some while after the response starts, which is the likely cause of the higher delay figure (assuming nothing in the path after the UR22 is adding delay). Should look into why there is so much going on before the peak in your measurements. Presume you are measuring a single speaker.
You must log in or register to reply here.
Share:
Facebook Twitter Reddit Pinterest Tumblr WhatsApp Email Link