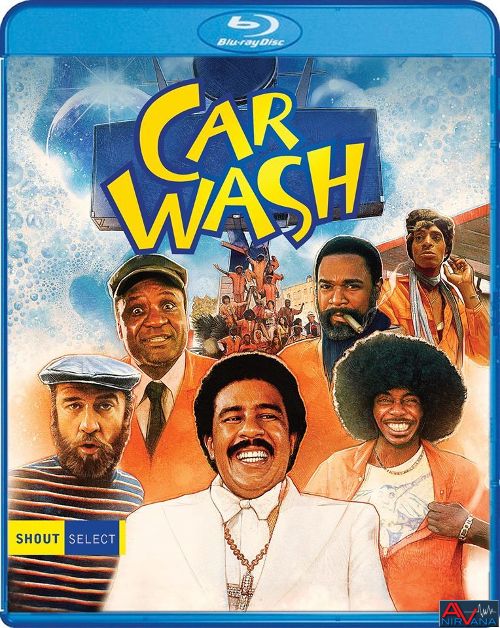 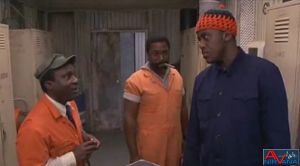 Movie
I make no bones about the fact that I’ve really been pleased with 90% of Shout Factory’s new Shout Select lineup. A subset of their films that tend to get a little more TLC, and gear themselves more classic and cult classic films rather than the obscure and forgotten. Car Wash is one of those films that everybody who grew up in the 70s (and even 80s) had watched a dozen times on cable TV, or worn out several VHS copies growing up. It wasn’t a giant hit back in the day, but evolved into a cult classic over time that has been almost immortalized. That’s not to say the same thing about the soundtrack though. Back in 1976 and 77 it won several Grammy’s as well as was played on every radio station in nation ad nauseam (to the point my father turned off the radio every time the theme song came on). I probably haven’t seen the movie since about the turn of the century, when I watched it with my girlfriend (now wife) back in high school, so I was seeing the movie for what felt like the first time. Nostalgic goggles gave it a rosier hue than I remember, but the fun of the era still survives, and now in the best looking and sounding it has ever been.

EVERYONE remembers or has heard of the influence of the 1970s on American culture. Tube tops, knee high socks, afros, disco music, the age of “free love”, and a style that is infused with hot oranges, nasty yellows and green, and a love of pastels that boggles the mind. It was also the age of comedies where raciness started taking over and with the help of action movies like Indiana Jones and the Temple of Doom marked the creation of the PG-13 rating. It was also the time of the Car Wash, an ensemble film that takes a day in the life of a singular car wash and all the people who frequent it. I won’t say that the movie is plotless, but the film takes a more leisurely approach to that part of the movie, giving us a “day in the life” of the people who work at ye old car wash. 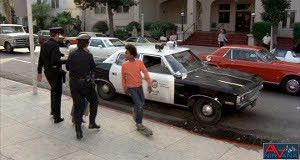 There’s a bungled heist, a flurry of crazy New York city people, a con man preacher, naughty encounters whispered in the ear, goofy tank tops, goofier hairdo’s, and George Carlin making a hilarious recurring cameo that makes the movie for me personally. I always had to chuckle at the 2nd and 3rd generation covers for the VHS and the DVD. George Carlin and Richard Pryor are featured prominently on the cover, advertising like they’re top billing when they’re really glorified cameos. Richard Pryor is in the film for all of 5 minutes, and Carlin maybe a few minutes more (even though he comes and goes throughout the movie looking for a cab fare that skipped on him). Probably something whipped up by Universal studio heads when they realized that the rest of the cast (yes, even Bill Duke wasn’t that popular back then) wasn’t a major pull and decided to use the notably faced cameos as a way to lure people in.

Despite the cameos, Car Wash really thrives off of all the interactions of the people coming and going. Even though the nature of the film is goofy and loose, there is a hint of political and social underpinnings, with brief stabs at the issues of sexual promiscuity rampant in the era, as well as the still frustrating aspect of a black man living in a white man’s world as the civil rights era had just ended and people were adapting to the new interactions that occurred as a result. Then there’s the biting take at work in general, and the ethics of communism that was just starting to sweep the nation back in the 1970s (and is now come to fruition in today’s pollical climate).

With that being said, the film has also aged a bit too. The idea of an ensemble comedy cast that just meanders and wanders become extremely popular and culminated during the early 2000 era (and part of the 90s) to the point where it became a little over used, thus the original feels like we’ve seen it before as a result. The same thing can be said for the humor. Carlin makes up some REALLY funny bits, but there is so much 70s infused pop culture references and scenarios that living outside of that generation makes it a bit hard to connect with the jokes at times. It’s still a funny movie, but some of the cult status is not nearly as relevant today as it was 20 years ago when we were closer to 1976. 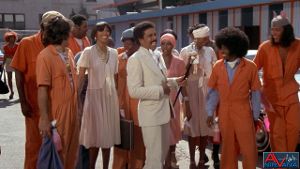 Shot on 35mm Kodak film, Car Wash is given a pretty solid encode for a film that hasn’t had any advertisements for a new remaster or anything. The opening shots of the movie look a bit grainy, and there’s a few speckles here and there with a teensy bit of print damage, but after the opening few minutes the 1.85:1 framed image cleans up quite nicely. Colors are bright and cheery, with a light amber hue that is saturated with 70s yellows, oranges and pastels. The sky is nice and blue, and facial tones are well within reason, with only the slightest of ruddy hues. Black levels are deep and inky, and only a few minor instances of black crush are there to mar the shadow detail. I see no haloing, no aliasing, and besides a little tiny bit of print damage here and there, the master looks to be in really good shape. 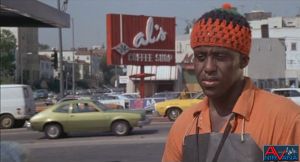 The same thing goes for the DTS-HD MA mono track that Shout Factory has put on the disc. It’s not a fully rich and surround intensive mix (duh), but the 2.0 Mono track is actually quite active and robust all things considering. The 70s score (with “Car Wash” being the most repeated song) flows evenly throughout the two mains with a very rich and detailed fervor, and the vocals are evenly balanced with the bombastic music. There’s the natural limitations of a 2.0 Mono track in comparison to 5.1 or above tracks of today, but the Mono track does everything well, and has a thick sense of depth and liveliness that keeps it up near the top of said dual speaker tracks. 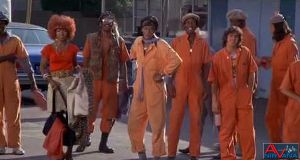 Car Wash is one of those films that is more nostalgic than relevant to today, both in humor and message, but it’s a fun nostalgic walk for those of us who love comedies from the 70s. The age has worn on it a bit, and the “life in the day of” ensemble films have been done to death, but this really was the original king of that genre. Shout Factory has done a good to great job on almost all the Shout Select lineups, and Car Wash is another good entry into the collector’s market. My first world problems nature till wishes some of the new Shout Select titles would come with fancy slipcovers, but the new extras are very nice, and the original artwork and newer one with reversible covers makes for good eye candy, and the technical specs are very VERY nice for a beat up old 70s comedy. Definitely worth checking out.

I really can't believe it survive all the way to Blu-ray. Incredible!

Going thru a car wash will never be the same now.

Wow. Blast from the past!

lol, yes it is. It's a walmart exclusive at the moment, but it got released a few months back