Can I utilise any of this equipment to elimate my sound card from REW measurements system ?

Iv been using the same setup with a miditech2 external soundcard for years now but Im just reproaching things after a couple years away from my CAR audio system. I cant remember but is the loopback connection needed for relative time alignment ? After all aligning the drivers between themsleves is whats important so why / when would you need absolute timing ?
Im trying to simplify my measurement systems. I now have 2 minidsp 2x4HDs being fed by a minidsp USBstreamer. Can I not eliminate my miditech soundcard somehow with all the equipment I have now ?
Heres a rushed sketch of my system ATM.

Im just trying to streamline the system and maybe get rid of the analog connections.
Thanks 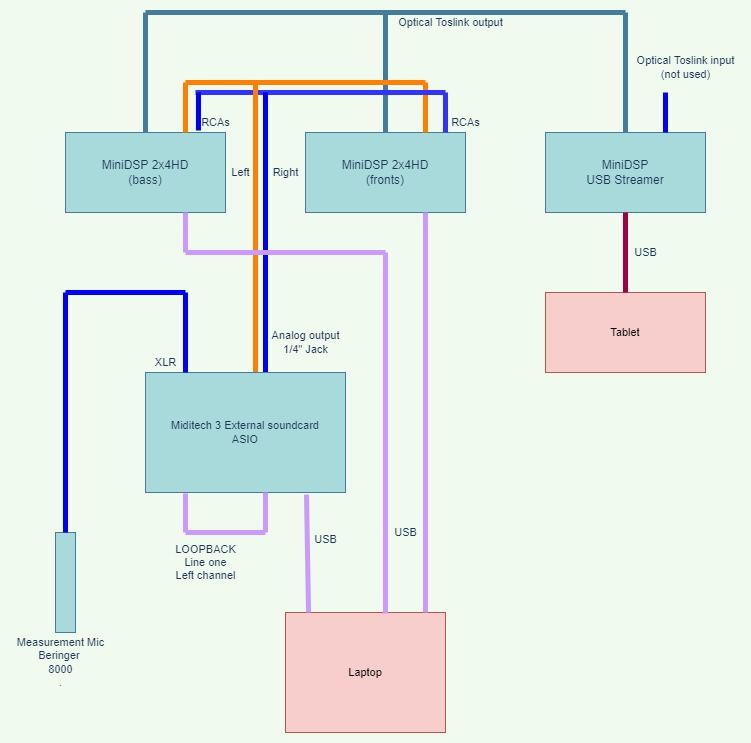 You need a timing reference to allow timing to be compared between different measurements. In a car a loopback is the most reliable, the acoustic timing reference is less reliable in such a highly reflective environment. With the loopback and the analog mic you need the soundcard.

Thanks John I realise that now, I originally wanted an optical out to the minidsp but then it would need to be converted to digital, pretty pointless as the DSP does the same, Ill just upgrade the analog connection. I wondered if I could use two beringer mics with my miditech 2 channel soundcard, I beleive these would be muxed together? Maybe one in driver position and one in passenger which may yeild better results overall, but isn't the second channel occupied by the loopback ?

I should rephrase the yield better results part, I mean do you think using multiple mics would represent a more accurate measurement to work with ?
Last edited: Saturday at 9:11 AM