Summary
Bond Bridge Pro can connect with up to 50 different RF controlled products, including motorized window shades and ceiling fans... and even a motorized masking system on a Seymour Screen Excellence TRIM movie screen. Using the included app, Bond Bridge Pro is easy to integrate with a home's network via Ethernet or Wi-Fi, quickly giving wire-free voice and smart home control over paired RF devices. 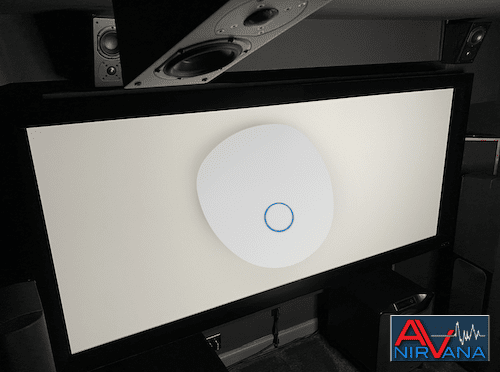 Today we’re taking a step back from our usual home theater attack and shining the spotlight on a device that can impact your experience in the theater room and around your entire home. First released in 2021, Olibra’s Bond Bridge Pro is a unique gizmo that transforms radio frequency (RF) controlled devices into smart home performers, all without added wires or mess. While it’s billed for use with ceiling fans, motorized shades, gas fireplaces, and the like, it’s friendly with most any RF controlled product operating within the 300-450MHz spectrum. Case in point, I was able to integrate it with a motorized masking system on a Seymour Screen Excellence TRIM screen, allowing the screen’s acoustically transparent masking panels to open and close with voice commands. 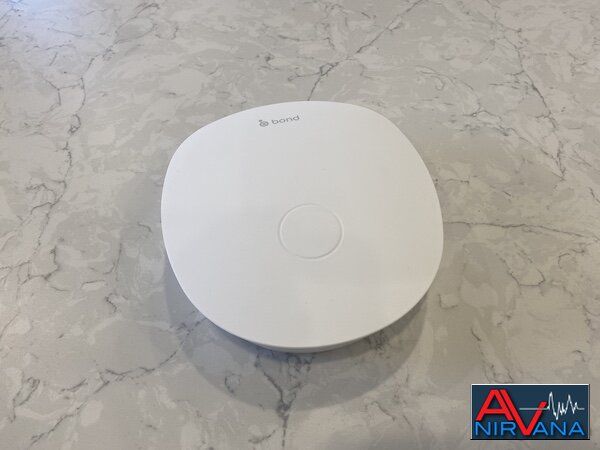 New Jersey’s Olibra doesn’t necessarily have a company name that rolls off the tongue, especially in home theater circles. In fact, you’ve likely never encountered the brand unless you’re hot and heavy in the custom integration space, so here’s a quick primer. Originally founded in 2016, Olibra hit the market with its first RF to WiFi bridge solution, Bond Bridge ($99), in 2018. It’s since designed and launched Bond Bridge Pro, a Bond Bridge on steroids, beefing up and broadening performance characteristics for demanding consumers and integrators alike. The company is also launching Bond Sidekick ($79, pre-order), a 5-channel wall-mount keypad that communicates directly with motorized shades, and Bond SideKick Scene Controller ($99) which can be used to trigger scenes with any and all of smart lighting, music, entertainment, movie screens, motorized shades, ceiling fans, thermostats, security, door locks and more.

Costing more than three times as much as its older sibling, Bond Bridge Pro ($379) steps up the technology’s ability to transform a product’s antiquated RF underpinnings to dreamy smart home standards. It does so with a surprisingly simple physical design. When I was first approached about giving Bond Bridge Pro a whirl, I imagined it might behave something like an Ethernet switcher, requiring long cable runs and direct access to a router, with an array of wired RF transmitters. Much to my surprise, the product emerged from its box looking and feeling more like a mysterious, hollow plastic shell.

Bond Bridge Pro is small enough to fit in your hand and weighs a mere 8.25 ounces. Its padded bottom side carries anchor points for wall or ceiling mounting, and its soft white body and circular, dimmable indicator light leaves the device looking like a modern smoke alarm. While I didn’t mount it, I did hold it against various surfaces, and it definitely can unassumingly blend in with white walls.

The remainder of Bond Bridge Pro’s physical assets reside in a covered cove on the back of the unit. There you’ll find an Ethernet connection, a 5V USB power connection, and a recessed “reset” button. The overall design of the area lends to aesthetically pleasing wire management, giving an Ethernet cable enough length to bend and enter a wall while remaining concealed – a bonus for owners looking to keep things neat and tidy.

Olibra includes a 6ft long USB cord and power adapter with the device, allowing power to be sourced from a wall or standard USB 5V source. But, unlike the original Bond Bridge, the Bond Bridge Pro can also source power from PoE (Power over Ethernet), giving owners more installation flexibility. Of course, this also means the unit can be integrated with a home network via Ethernet or 2.4GHz WiFib – another bonus. 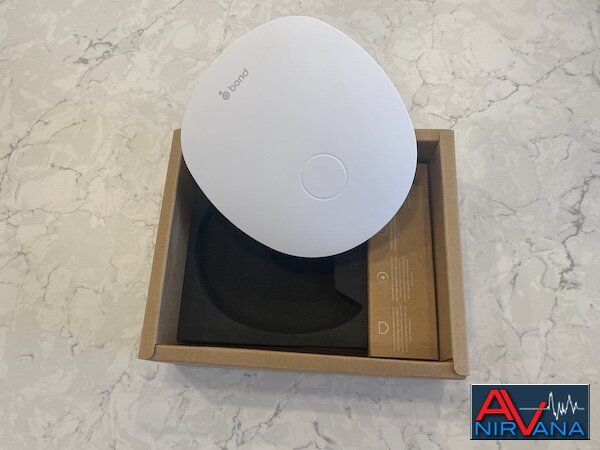 Olibra says the Bond Bridge Pro is fully compatible with Somfy, Rollease Acmeda, Nice, Bofu, A-OK, and Dooya motorized shades, with broader compatibility to follow, along with every brand of RF controlled ceiling fans. However, the universe of compatible products isn’t confined to fans and shades, as Bond Bridge Pro is friendly with RF frequencies between 300-450 MHz.

On the smart home front, Bond Bridge Pro has an open local Application Programing Interface (API) and drivers for use with Control4, RTI, URC, ELAN, Savant, Homebridge, and Hubitat. Additionally, it can be paired with Josh.ai voice control in Control4 environments, and works with SmartThings, Google Assistant, Amazon Alexa, and can be added as a Siri Shortcut on iOS devices.

The Bond Bridge Pro ships in competent packaging tattooed with simple instructions to get the unit up and running. My sample’s build quality was on point, belying its hollow, lightweight nature. The body’s molded plastic case carries a low sheen finish that subdues light reflections, and the fit and finish are excellent across the board.

Much of the set-up process centers around the Bond app (iOS, Android). After creating an account, the app provides easy-to-follow steps for WiFi and device integration. I was able to add Bond Bridge Pro to my home network in minutes, which leads me to believe that anyone with basic smartphone skills can also accomplish the task. But, if troubles arise, Olibra includes in-app links to a series of helpful videos. Owners of the Pro model can also take advantage of tech support that’s available 12 hours a day, 7 days a week.

One of the more intriguing aspects of Bond Bridge Pro comes in placement requirements, which are wildly flexible. It doesn’t require a direct line of sight to associated products, nor does it need to be in the same room. In fact, one Bond Bridge Pro can manage up to 50 different RF controlled devices in a 3,500 sq ft home. That means you can place it nearly anywhere, and its proprietary RF capabilities can reliably deliver results. For this review, I powered my Pro sample with the included 5V USB cable from three different areas of my home. While my house exceeds the device’s 3,500 sq ft specification by over 1,000 sq ft, it worked flawlessly for the duration of the evaluation.

Unfortunately, my home is a veritable desert when it comes to RF controlled devices. My ceiling fans are hardwired, I have a wood-burning fireplace, and our windows are outfitted with plantation shades. I do, however, have a custom-built Seymour Screen Excellence (SSE) 2.40:1 Enlightor Neo AT projector screen with the company’s TRIM motorized masking frame. Because my theater room (and home) lack a universal home automation system, I opted for SSE to equip the masking system with an RF remote. Little did I know, that choice made this review opportunity possible.

Integrating the masking system’s remote commands with the Bond Bridge Pro was insanely easy, requiring a few in-app steps followed by aiming the remote at the Pro unit while executing each command. In no time at all, the Bond app was controlling the masking system with touch screen commands. Following a few more steps (detailed here), the masking system operated with both touch and voice commands through Google Home. And, with just a few steps more (described here), I’d enabled voice control using Siri Shortcuts on my iPhone (iOS 15.1, requires iOS 13 and above).

The path to using Siri Shortcuts was less straightforward than Google Home, requiring some added help from the team at Olibra. Step one was downloading the Shortcut app, which wasn’t pre-loaded on my phone. Step two involved adding new phrases to Siri within the Bond app, a process that didn’t ring with intuitiveness for me. Following some trial and error, I successfully added the phrases “Open Movie Screen” and “Close Movie Screen,” which, in hindsight, was less complicated than it initially seemed.

The SSE RF masking controls have three commands: open, close, and stop. The set-up process allowed all three commands to be programmed, but commands take a few moments to execute by voice, making the stop command all but useless. That, however, is a minimal issue because the physical remote (or in-app touch screen buttons) can still be used as needed. 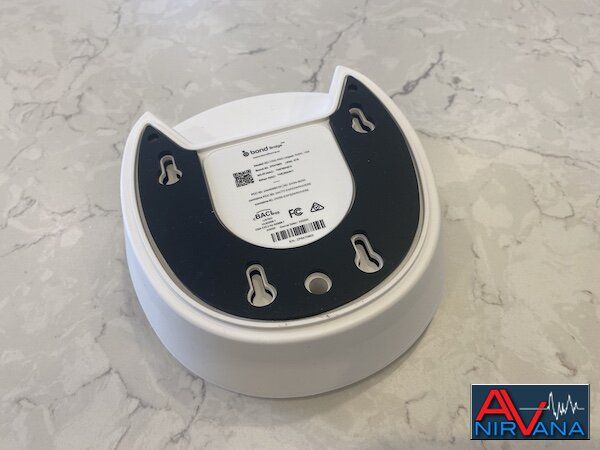 With set-up completed, I stashed the Bond Bridge Pro a floor above my home theater room and took the system for a test drive. Touch screen commands within the Bond and Google Home apps worked flawlessly, delivering instantaneous results. But the true pièce de résistance was in voice command execution, which also went off without a hitch.

With a brief “Hey Google, close masking” command, the SSE’s motorized TRIM mask system closed without hesitation. A similar “open masking” request delivered the same results in the opposite direction. Overall, Google Home never failed to execute a command, completing the tasks with a verbal confirmation (which is great for prepping the screen from non-theater areas of the home). Siri Shortcuts delivered similar results with a slight second to second-and-a-half delay. Siri, however, had failed to execute a command on several occasions, leading me to crown Google as my preferred method of voice control. As to why that occurred, I’m not sure. My best guess is a failed iPhone to local network connection.

The Bond Bridge Pro provided stable, no-nonsense performance for nearly ten weeks. I never experienced any reboots or crashes, nor did I ever find the unit struggling to maintain a WiFi connection with my Google mesh network. It also didn’t forget RF commands (which are conveniently backed up by the app to protect against data loss if a catastrophic failure were to occur). 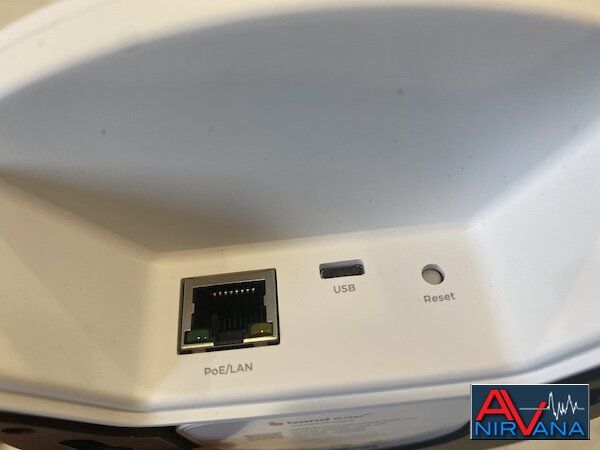 Olibra’s Bond Bridge Pro takes a great idea – the original Bond Bridge – and makes it better. With support for PoE, an increase in range and the total number of addable devices, a three-year warranty, and daily tech support, it’s easy to justify paying more if you need the extra bells and whistles. While I hardly came close to maxing out its device support capabilities, I was amazed at the Bond Bridge Pro’s ability to transform a simple RF motorized system into a modern voice-controlled wonder. It certainly added a sense of tech flair to my home theater room while injecting the movie watching experience with voice control convenience. No more searching through armrests for the masking system’s remote control; all that’s needed is a voice!

If your home has similar RF controlled devices, shades, and fans, do yourself a favor and give Bond Bridge Pro a shake. Its magical capabilities are undeniable.