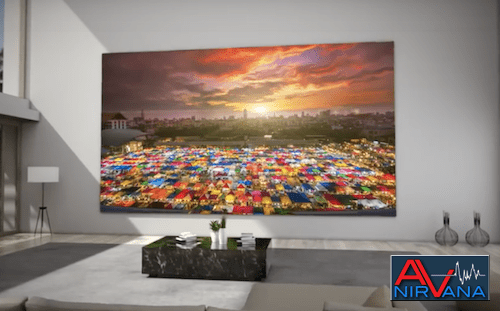 (December 8, 2020) Here’s a quick news nugget to chew on: Yonhap, a South Korean news agency, has reported that Samsung will introduce a new Micro LED television on Thursday. According to Yonhap, the reveal will take place during a planned webinar. While Samsung hasn’t leaked any product specifications or pricing information, general consensus expects this particular model to be consumer oriented.

Earlier this year, Samsung arrived at CES 2020 with new 88-inch and 150-inch versions of its dazzling Micro LED TV called “The Wall.” At that time, Samsung said it was nearing mass-production capabilities, predicting that micro LED TVs would arrive in US and European markets later in the year. According to Yonhap, Display Supply Chain Consultants predict that microLED TV sales will grow from $25 million this year to $228 million by 2026.
Last edited: Dec 8, 2020

So, the announcement happened... it's a 110" 4K MicroLED TV. No price yet. It will go on pre-sale in Korea this week... should luanch globally next year. One cool feature is a quad-screen mode that sources content from 4 different HDMI inputs!
N

Other Speakers or Equipment
HTPC (windows 10 with Kodi)

I'd have to learn how to split my brain into four equal pieces.

These are probably a few years from being close to affordable. I recall seeing this one costing as much as a small home. Won’t be too many of these coming off the production line.

110” display for 110K euros! They need to get these down to less than a tenth of that for it to even be feasible for home consumers.