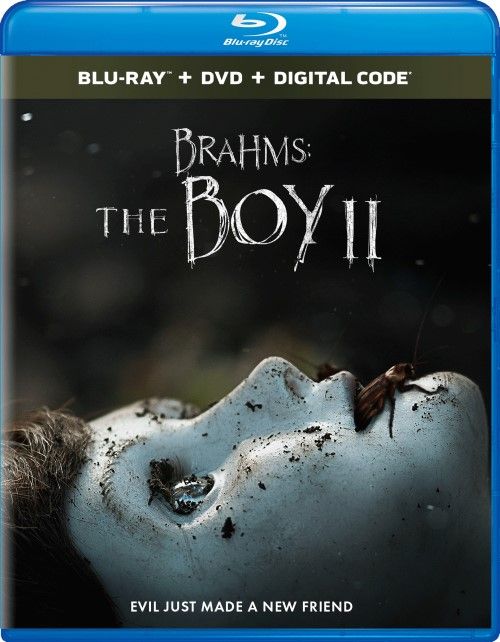 Movie
2016’s The Boy was a moderately entertaining film in theory, but really a chore to sit through in reality. The only redeeming quality about the film was the ending, as it actually was a neat twist that took some of the supernatural out of the subject matter and was disturbingly creepy. Past that particular twist, it was your typical PG-13 “horror” movie with just a few jump scares and a lot of misdirection. It really didn’t need a sequel, or really set up a sequel, so you can bet that I was a tad surprised when I saw that Universal Studios was putting OUT a sequel. Needless to say, it met every expectation that I had. And by that I mean that it is every bit as horrible as I anticipated. The film retcons most of what happens in the first film, tries to make it supernatural instead of a “twist” that the supernatural goings on in the first movie were misdirection, and generally doesn’t deliver on the frights as well.

Liza (Katie Holmes) and her son Jude (Christopher Convery) have suffered a traumatizing home invasion that has left both people scarred. Liza wakes up with nightmares every night reliving the event, and Jude has stopped talking completely. Despite heavy therapy with a child therapist Jude is not showing any progress, and both Liza and her husband Sean (Owain Yeoman, most famous for playing Detective Wayne Rigby on The Mentalist) decide to take him out to the British countryside in hopes that the fresh air and peaceful environment will help the lad. Yup, you guessed it, the couple move out to a small guest house down the road from the fateful Heeleshire estate where the first movie took place.

While out and about Jude comes across a buried doll (guess whoooo!!?) in the woods and gets attached to it very quickly. Neither Liza nor Sean really like the creepy looking antique doll, but figure that Jude might be able to use it as a bonding instrument in his therapy, so they allow it’s presence in the house. Soon however, things take a darker turn as Judge seems to be giving human emotions and desires to his doll. At first the parents are willing to put up with it, but as the demands become more dark and disturbing and the strange things start happening, Liza is convinced that something darker and more evil is in control.

What made the first movie so interesting was the mystery behind it. Lauren Cohen’s character was hired as a nanny for the doll Brahms, and she thought it was just a cushy “fake” job for a weird home owner, only to find out that there was so much more. The last act of the film was actually rather entertaining and turned the poorly written script on it’s ear enough for me to rate it half a star higher than it normally would have been. This film goes an entirely different direction, retconning much of the mystery behind the doll from the first one, and then goes COMPLETELY off the rails in the final act as Brahms become some supernatural evil. Something that the first film teased us about, then completely proved false in the last act. It’s as if the writers for this film didn’t even read the script for the previous one.

I really thought this could have been a better film, as it starts out with a movie about a mother and child suffering from PTSD, then going straight into the dumpster with the supernatural story. The ending was just so convoluted and unbelievable that I actually started laughing at it. The writing is every bit as crummy as the first movie, and Katie Holmes really doesn’t do much in the film besides look stressed and tired, despite there being some obvious attempts at jump scares. Not to mention that the final ending minute or so is so cheesy and straight out of the 80s and 90s horror rule book that I just wanted to bang my head against the floor

The 2.39:1 framed Blu-ray image is very sharp and clear for the most part, with a nice teal color grading to it. Facial details are nice and clean, and you can actually see the crows feet and age marks around Katie Holmes’ usually young looking face (it’s been a while since I’ve seen her on screen). The blacks are deep and inky, though I did notice some color banding in the shadowing manor. The colors are a bit muted and dulled, but primary colors like green grass and a red shirt on one of Jude’s cousins do pop through decently. The image is heavily stylized and never meant to look sharp and glossy, but the results are still very satisfying

The best part about a horror movie (especially a jump scare film) is the audio mix, and the 5.1 DTS-HD MA track is MORE than up to the job of making the listener jump out of their chair. Downbeats of the track and startling moments lift you straight up with deep bass. Vocals are crisp and cleanly located up front, and the surrounds get some awesome mobility and nimbleness. There’s a scene half way through the movie with the children playing outside that had me snapping my head over my shoulders thinking something was coming to the rear of me. The bass is tight and punchy, but never OVERLY hot and deep. It’s a good mix and probably one of the better horror mixes I’ve heard in 2020

​
Brahms: The Boy II is not really an improvement or failure over the first movie. It improves the first in some ways, but seriously falls off a cliff in other ways, ending up on the same level playing field as before. As a sequel it’s only real connection to the first movie is the visuals of the doll itself, and the creepy doll “telling” his victim things. That’s about it. After that the film takes a massive deviation from the predecessor and just forges it’s own thing. The sad thing is that it’s “own thing” is pretty forgettable and bland. The audio and video are very good, but that’s about the ONLY thing I can recommend or say positive about the package. Personally I would just skip this one.

Wow, I didn't even know there was a part 2. Will skip, thank you.