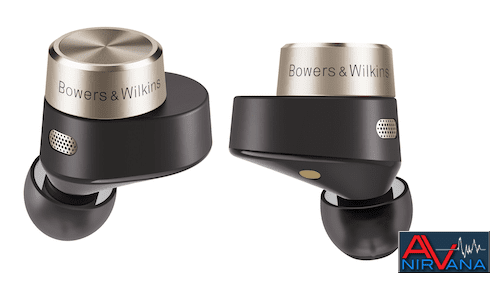 Supported Bluetooth 5.0 codecs include aptX Adaptive, HD, Low Latency, and Classic, along with AAC and SBC. And the protective charging case can be connected to an audio source, such as an airplane's in-flight system, for wireless retransmission directly to the earbuds.

The PI7 is IP54 rated for water resistance and offers 4 hours of playback time with an additional 16 hours of charging time provided by its case.

The less expensive PI5 bumps battery life up to 4.5 hours, with 20 hours of case charging. It also achieves 10Hz to 20kHz of performance but relies on a single 9.2mm dynamic driver. Onboard Bluetooth 5.0 with aptX decoding is complimented with AAC and SBC compatibility, and active noise cancellation is delivered by four microphones (two per earbud).

Both models weigh a mere 7 grams per earbud.

“We are excited to be venturing into the True Wireless category with our new headphones," explained Geoff Edwards, Brand President, Bowers & Wilkins. "It’s long been our philosophy, established by our founder John Bowers, that we would only enter a new category if we believed that we could set a new standard for audio performance in that space. With PI7 and PI5, we truly believe we have achieved that.”