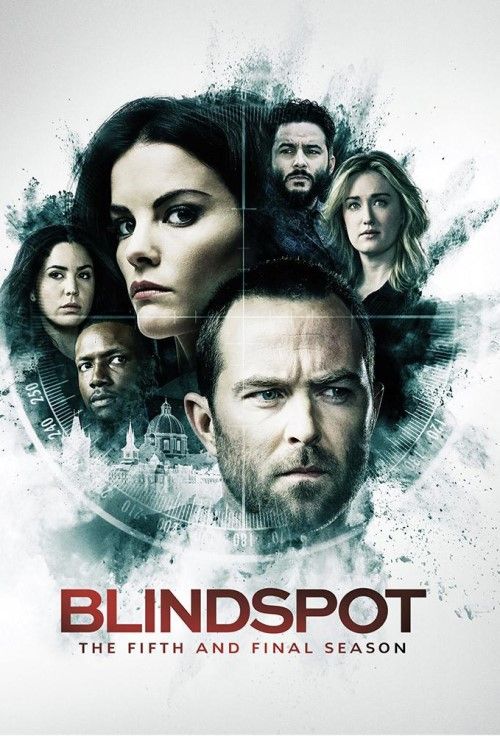 Movie
Blindspot has been one of my “half” guilty pleasures over the last 5 years. By half guilty I mean that it’s a really solid police procedural at heart, but it has a really silly gimmick that wore off years ago. The theory behind the series is that Jamie Alexander’s Jane Doe was a sleeper agent sent by a terrorist organization who had wiped her memory and sent her in as a trojan horse. Infiltrate the FBI, use a series of mysterious tattoos that was a compass for other crime going on in the world, and use her position to let said terrorist organization into a position where they can reset the entire world with a massive reset. Well, there’s only so many seasons of following tattoo clues every episode before that gets old, and that got old by the 2nd season. Season 3 tried to change things up again by having Jane’s violent brother (and terrorist maestro) Roman (Luke Mitchell) put a whole new set of ultraviolet tattoos on her in a game of brother/sister cat and mouse, but the tattoo schtick was rapidly become stale.

Season 4 broke the mold by having the tattoos play second fiddle to the story, as it changed Jane’s position in the FBI agency roles, and laid waste to old friendships. Tasha Zapata (Audrey Esparza) had now flipped sides to the same gigantic evil villain of season 3, this time under the leadership of Madeline Burke (Mary Elizabeth Mastrontonio, who steals every scene that she was in) and Jane and Kurt are FINALLY hitched. However the honeymoon is over as Madeline makes her power play by stealing some nasty weapons, and Jane undergoes a bit of a regression to where she is her “old” self previous to coming to the FBI. The finale of the season has Madeline burning the entire FBI squad including Kurt, Zapata, Jane, Rich Dot Com, Parker etc, and has them on the run. 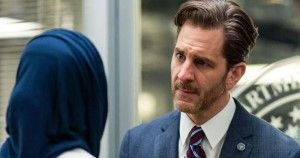 Now to fast forward to this season. The team is on the run and they’re trying to play their own game of “hunt and be hunted” as Madeline hunts them, and they hunt Madeline. They’re still trying to figure out how the drone strike killed one of their own, and just what Madeline’s end game is, while Jane still struggles with the results of Zip poisoning in her system (the drug that erased her memory 5 years ago). As time runs out it’s clear that only some of them are making it out alive, and Jane and Kurt have to put it all on the line to save the world before a psychotic terrorist destroys everything they both love.

According to an interview with creator Martin Gero he always had an endgame in sight for the show. He didn’t want to have another procedural show that went years past the original idea and just milked it for ratings. He had a plan of where he wanted to end the characters journey and he had it figured out to season 5. Gero worked it out the studio heads to let him have a shortened season 5 to finish the show after they wanted to cancel it after 4 (the ratings had been steadily dropping) and he put his heart and soul into wrapping up all the loose ends and ending on his terms. Luckily the results aren’t slap dashed together or feels truncated like so many other shows. The final season feels very “different” than every season so far (the gimmick of the tattoos got ingrained in our heads after a while) and he makes the finale a true mind job, leaving it up to the audience to decide whether certain characters lived or dies (in the same interview Gero emphatically states that the did that on purpose, so that the audience could decide for themselves what sort of fate Jane deserves). It’s a solid action season and definitely a nice ending to the series. The show has never been truly TOP NOTCH action/police procedural fare, but it’s always been solid entertainment, so Gero being given the chance to end the show on his terms is very satisfying. Especially by a jaded old reviewer who has seen too many shows get the ax when they only had a little bit more to tell, or were just getting good.

Even though the production of the DVDs falls to Warner Archive (no burnt discs, all of them are pressed DVD-Roms) the quality for the show doesn’t falter one bit. Which isn’t surprising considering Warner Archive has always gotten high marks for their releases. The digitally shot show is nice and glossy, with plenty of great textures and fine detailing amid a slew of slightly blue tinged shots (the show loves its blues). There’s still some mild softness inherent to the source, otherwise it’s the same great looking show we’ve all come to love (just sadly not in HD this time).

If you’ve read any of my previous reviews of the show then you know what you’re in for, but for the uninitiated let me break it down. The show is a nice bass fest with lots of action, lots of crashing through doors, and a tense score that really fills out the 5.1 Dolby Digital mix. Vocals are clean and clear as can be, and the overall balance is VERY good. I do notice that the dolby digital mix IS a bit weaker than the Blu-ray’s DTS-HD MA lossless, but that’s a side effect from going from lossless to lossy. 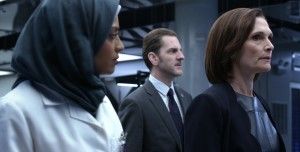 As I’ve said before, Blindspot has really changed over the years. The first couple of years it was a police procedural with a sci-fi twist, the 3rd year it tried to change things up by focusing on Roman MORE than the tattoos, and the 4th and 5th year went more into action/thriller status. I’ve enjoyed all 5 seasons, but I fully admit that Blindspot isn’t some jaw dropping or revolutionary show. It’s simply a fun show that delivers more than enough entertainment to keep me tuning in year after year. Jamie was great as Jane, and Sullivan was solid as Kurt weller, but I really have to admit that Parker, Rich Dot Com and Zapata all really made the show for me. I tuned in for their camaraderie more than anything else, and this season definitely delivered that. Interestingly enough is also how the home video releases have faired over the years. The first two years was a Blu-ray and a DVD release, the third and fourth years were DVD to the masses, with Warner Archive for the Blu-ray release. Sadly this year there is no wide release for the DVD set, but rather Warner Archive is releasing it and forgoing the Blu-ray release (which makes my OCD itch as I’ve been collecting the Blu-rays for years). Solid picture and audio, and a good ending to a solid show. Fun watch.

It took all I could do to get thru the second season, then I gave up on it.

Sonnie said:
It took all I could do to get thru the second season, then I gave up on it.
Click to expand...

if you weren't wild about the first two seasons then the next three probably won't tickle you either. Even though they changed the formula up a bit the show had a very very similar tone to it the entire time up until the end
You must log in or register to reply here.
Share:
Facebook Twitter Reddit Pinterest Tumblr WhatsApp Email Link