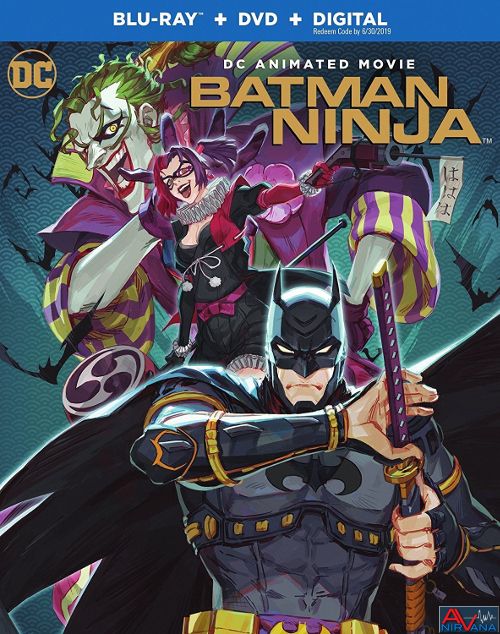 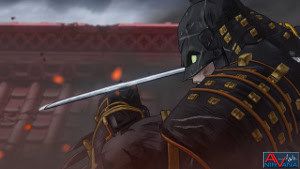 Movie
I have been having a blast with these one-off “else world” films in the Batman mythos, and really enjoyed the dark Batman: Gotham by Gaslight. A movie where we got to see an old 1800s variation of our favorite city of Gotham. Now just a few scant months later we get another iteration of these “else world” stories in the form of Anime. It wasn’t but a few months ago when the New York Comicon unveiled a trailer with Batman as a ninja, but I immediately wrote it off as some fan fiction type of thing until I realize that, yes, this WAS a film that was coming to fruition! What more could you ask for? Batman, ancient Japan, sly winks to Anime subculture, and the word Ninja! I was already sold by this point. Fast forward to a few months later and I actually get to dig into the release and am more than delighted. The film brings out a dark aspect of the Batman, as well as cheekily having fun with the almost 4th wall breaking anime elements, while still retaining the heart and soul of the comics.

Batman (Roger Craig Smith) is in the middle of trying to capture Gorilla Grodd (Fred Tatasciore) when the intelligent ape unleashes a time displacement machine that transports the Dark Knight back in time to feudal Japan. Upon arriving Batman finds out that he’s not the ONLY one that’s been transported back. It seems that Gorilla Grodd also used the time portal to bring back Penguin, Two-Face, Deathstroke, Harley, The Joker, and Poison Ivy back into that time period as well. Now the hooligans have each taken over one of the warring states of Japan and are fighting each other for total dominance. Luckily a few heroes were around at the time of the time displacement, so Red Robin, Robin, Nightwing, and Cat Woman have been living in the past as well.

Batman seems to bet the last one to come through the time portal, so it’s been a few years for the rest of them. While to Batman it’s all new and shocking, to the rest of the criminals and heroes they’ve been fighting each other for years. Like normal, Batman can’t let the whole of history be re-written by a couple of goons from his time period, so it’s up to him to accept the way of the ninja and use whatever elements are at his disposal to bring the heroes AND the villains back to the future and where they belong. Unfortunately it’s not going to be as easy as he had hoped, as the warring crime lords have built their own technological marvels themselves while Batman was drifting in time. So now they have giant mecha cities that force the Batman to use his most primal instincts (and some hilariously fun anime cliches) to tear the machines down to the men inside. 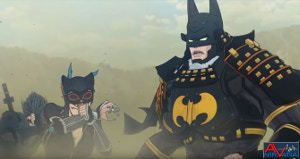 While Batman Ninja isn’t as incredibly EPIC as some of the fans were salivating in anticipation from the trailer, it is a FUN movie. Taking elements from Anime, eastern lore, and other geek subculture from the eastern hemisphere, it just has fun with itself. The movie is dark and PG-13 to the core, but it’s not so violent that it ostracizes the younger fans like some of the R-rated DC animated films have done recently. Also, while the characters IN the film take the scenario extremely seriously, the movie itself definitely doesn’t take itself too seriously. There are so many Anime cliches in that the creators are practically winking and nodding at the camera the entire time. We have everything from shouting your moves to make them more powerful, mecha cities, SUPER mechas, chibi characters and much much more.

The animation style also lends itself to the story, as it is mainly a mix of traditional Anime with some older watercolor designs from Asian art. Not only that it employs several TYPES of animation too. The watercolor art when Red Hood meets the reformed Joker and Harley is reminiscent of The Tale of Princess Kaguya, while the rest is much more feudal 1990s animation style. Voice acting is hit or miss here there. Mostly for the English language track. I REALLY liked the Japanese track, as it gave the film a sense of authenticity that the English track is lacking, AND the fact that most of the English actors rather awkwardly done (besides Joker and Will Friedle voicing Red Robin).

Rated PG-13 for sequences of violence and action, and for some suggestive material 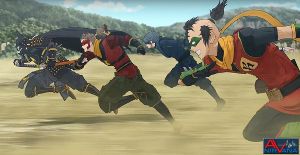 Usually I give a “good” rating to most of the DCAU video encodes, but I’m rather impressed with Batman Ninja. The encode is sharp and clean like most of the series ,but I was expecting the obligatory banding that seems to be baked into the master of all there animated films from the DC universe. Instead there’s virtually no banding to the naked eye and some great detail to boot. The intricate designs of the Edo era costumes are lavishly detailed, with every button, curve, and blade shown with the utmost intricacy. Colors are bright without being overly saturate (there’s almost light desaturation to the whole image), shadows are well placed and accurate. There’s some mild softness to the animation style, but it’s not overly noticeable unless you focus on it. Overall, a great looking encode from Warner 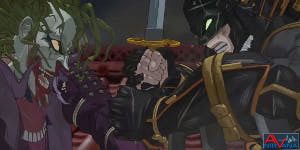 Like all of the DCAU films from Warner, don’t expect a 7.1 or Atmos audio mix, but rather a very pleasing 5.1 DTS-HD MA mix. I was actually surprised at hearing it, as most of the DCAU mixes are GOOD, but not GREAT. This 5.1 track is actually really robust with a lot of action that constantly shifts directions and uses a healthy amount of bass as well. Dialog is well defined and dynamic range is really impressive, with deep thunderous roaring battles that can fade to a quiet dialog centric scene at the drop of a hat, and vice versa. Surrounds are always active with the sounds of explosions, clashing blades, and the general mayhem of Batman in the Edo period. While the back of the box lists English as the main track, the extras sport a 5.1 Dolby Digital track (640 kbps though, which is a nice boost) in the original Japanese as well. Here’s where I’m torn. I REALLY like the Japanese track’s voice acting much better than the English one. But the English track is more vibrant and powerful due to the lossess encoding, so it’s a bit of give and take.

Batman Ninja is a fun offshoot from the traditional DCAU that Warner has been releasing for quite some time. These “else worlds” films are a lot of fun, as they allow us to enjoy non canon material without having it interfere with the regular stores from the comics or films. This latest iteration just so happens to be one of the more fun stories that I’ve seen come from the DCAU Batman movies in quite some time. It’s exciting, goofy, and a hoot if you’re a fan of Anime in the slightest (while it’s not in any way necessary to be an Anime fan, it certainly adds to the enjoyment of the film). Audio and video are refreshingly good, and the extras are pretty decent. If you’re a fan of Warner’s DCAU lineup, then Batman Ninja is a worthy addition to the collection. Take a look.

Thanks for the review. I will try and catch this one.