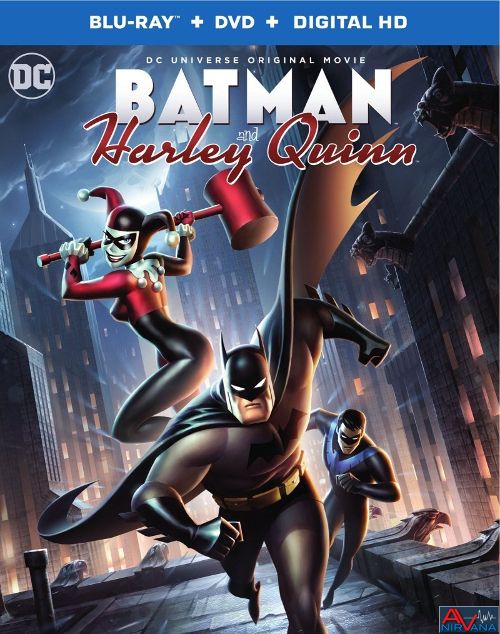 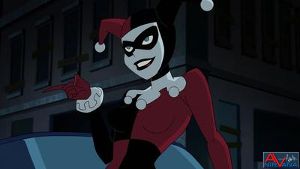 Movie
I make no bones that I think the DC animated lineup of films is LEAGUES better than Marvel’s animated films. In fact, I’d go so far as to say that Marvel needs to stick to making live action films, as their cartoons in recent years has been VERY lackluster indeed. Batman & Harley Quinn marks the 30th film in the DC universe that Warner Brothers has put out, and it’s nice to see some old faces back at the creative team. The film features fan favorite voice actor Kevin Conroy, Bruce Timm back at the writing table, and a cheeky bit of humor that blends in some of the Adam West cheese with the potty humor of the newer Harley Quinn comic books. It’s not going to fit in with the serialized storytelling of the New 52 films that we’ve been enjoying, but like The Killing Joke and Batman: Return of the Caped Crusaders, it makes for a fun diversion (even if it is a bit disjointed in the humor and seriousness aspects at times).

Harley Quinn is one of those strange characters that was never part of Batman canon until she was introduced in the 90s TV show (also starring Kevin Conroy) where she just BLEW UP in popularity (she was basically what Jubilee was in The X-Men universe). Now she has her own comic series, and has become almost an anti-hero in many ways as her fans rabidly crave more of the Joker’s little ex-girlfriend. People are dressing up like Harley all over comicon’s the nation wide, and she was the single good thing about the live action Suicide Squad film that came out last year (and I mean SINGLE good thing about that film). If you listen to the commentary all those involved were actually shocked that Quinn became so popular, as she was just supposed to be one of Joker’s minions in the animated TV show, but for someone reason the twisted little relationship between her and Mr. J became a phenomenon that they just rolled with.

We open up the film with Poison Ivy (Paget Brewster) and Floronic Man (Kevin Michael Richardson) breaking into S.T.A.R. labs to steal some information on Swamp Thing. Batman (Kevin Conroy) and Nightwing (Loren Lester), are called into the crime scene to figure things out and realize that Poison Ivy is up to something big with this little heist. However, she’s kind of under the radar and the only person who could likely dig her out is someone NEITHER of them want to deal with. Harley Quinn (Melissa Rauch), who has disappeared since getting out of Arkham Asylum. 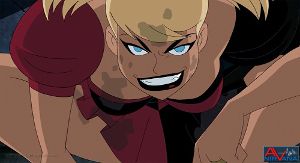 Nightwing is sent to track her down and finds the queen of crime living as a cos-play waitress version of HERSELF in a superhero babe themed cafe. After a little flirting and hanky panky, Quinn agrees to help track down her former friend and criminal, Ivy, but only if she can get in on the action and go WITH the dynamic duo to get her friend without incident.

Batman & Harley Quinn is more of a glorified way of getting Harley into her own film due to the rising popularity of her character. Batman moodily sits in the background as the disapproving father figure, while Nightwing wisecracks with Quinn as the dancing sociopath (she’s very adamant about the distinction between sociopath and psychopath) parades around the screen, doing everything from smashing people in the face to singing a punk version of “Hanging on the Telephone”. Past that, the story is just your average TV show episode elongated to a full hour and a few minutes (outside of credits).

It’s a joy to hear Kevin Conroy and Loren Lester back in the saddle again, but they’re really side characters in their own movie. Melissa Rauch is the queen of the walk as Harley, and I have to say I’m not sure Melissa really captured her voice as well as previous actors. However, that may be more of a side effect of the changes that Quinn has had over the years with her character changing to more of an anti-hero than a villain over the years. The slightly “dirty” humor of those new comics fits Melissa Rauch to a T, and in that respect she fights right in. Speaking of potty humor. It’s interesting to note that Batman & Harley Quinn is a strange hybrid of Bruce Timm’s whacky humor, blended with more than a few nods to the 1960s Adam West Shot, and the dirty humor of the new Harley Quinn comics. With that in mind the humor seems to be all over the wall with Harley winking and making sex jokes to Nightwing, then the series going completely Adam West in the Karaoke bar, to a heartfelt serious battle with Poison ivy near the end. It’s a bit mind boggling, but still goofy fun.

Rated PG-13 for sexual content, language, violence and action, and for rude humor 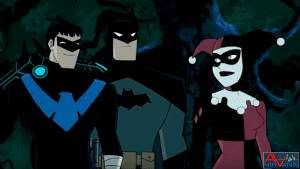 Warner’s 1.78:1 AVC encoded Blu-ray maintains the same style and art textures that many of the rest of the lineup have shown. The simple line art is a bit ….well….simpler than usual, but still very well done. The film shows solid detail around the edges, with no signs of jaggies or haloing at all. Details are minimal, but that is more of an issue due to the simple line art rather than softness or other encoding flaws. One thing I REALLY noticed off the bat was very VERY little banding. Usually banding is the worst problem in any of the DC films from Warner, but I was shocked to see literally almost no banding except some minor bouts here and there. Colors are warm and vibrant, with Harley’s classic clown costume showing up nicely on the dark nights, with sharp blues, greens and the like complimenting the strong primary red. 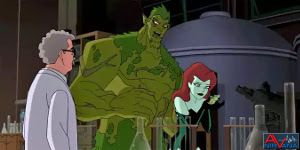 The 5.1 DTS-HD MA track is very robust and full, with a lot of heavy midbass to accentuate various crashes, bangs and thuds in the action oriented film. Vocals are crisp and well centered in the front, while the craziness of the action swirl around the listener in a crazy, if not wildly nuanced, manner. LFE is tight and heavy, with lots of impact for action sequences, as well as adding some weight to the Batmobile. Surrounds are used well with chairs and tables crashing during a bar room brawl, as well as Harley’s voice when she starts rocking out to “Hanging on the Telephone”. It’s not an insanely detailed track, but the mix is well done for the simple animated film and sounds great on Blu-ray.
. 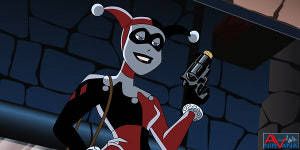 • The Harley Effect (Featurette): Harley Quinn, has a deep history with the fans of the DC Universe. This featurette traces her humble roots from her creators, to those that portray her at Comic book conventions. She is a symbol of strength and beloved by many.
• Loren Lester: In His Own Voice (Featurette): This documentary examines actor Loren Lester's legacy within Batman The Animated Series, Dick Grayson's character, and the popularity that surrounds Lester's interpretation of the Boy Wonder.
• A Sneak Peek at the next DC Universe Original Movie: A behind-the-scenes look at the next entry in the popular series of DC Universe Original Movies, featuring thoughts from the talented filmmakers and voice cast.
• From the DC Vault – Batman: The Animated Series – "Harley and Ivy" and "Harley's Holiday"

I had a good time with this 30th animated film from the DC lineup, and while it’s not perfect, it does make a lighthearted watch. The film is a glorified vehicle for Quinn all the way, and Melissa Rauch hams it up as Mr. J’s much more cynical and jaded tossaway than the psychotic villain from Suicide Squad or the 90s animated show. Warner’s simplistic line art looks good on Blu-ray, and while it DOES have a 4k UHD release, from all accounts the Blu-ray and the 4K don’t really look that different. Worth it as a fun rental for those who enjoy the DC animated lineup.